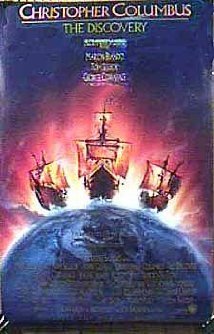 CHRISTOPHER COLUMBUS: THE DISCOVERY not only captures Columbus' voyage, but also his magnificent faith and trust in God. The acting is excellent, the cinematography is beautiful, and the movie's overall tone of genuine faith is uplifting. However, there is implied sexual impropriety, brief violence and native nudity, although there is no offensieve language. Even so, it is the best epic motion picture in many years, reminiscent of the Golden Age of Hollywood movies.

(C, B, S, VV, N) Focused on Christian character, Gospel witness, positive references to Jesus Christ, and a biblical worldview, the film is only slightly marred by implied sexual impropriety, some brief violent episodes, and native nudity (upper female), although there is no objectionable language.

Filled with epic grandeur, CHRISTOPHER COLUMBUS: THE DISCOVERY begins in Portugal years before Columbus’ voyage in 1492. After failing to convince the king, Columbus goes to Spain and pleads with King Ferdinand (Tom Selleck) and Queen Isabella, telling her: “I want to take the Gospel into all the world as well as find a new route to the Indies.” His opposition comes from a priest (Marlon Brando), who warns Columbus that his dream is refuted by St. Augustine. Columbus shows Augustine was wrong in this regard, alienating the priests. Nevertheless, Columbus persuades Isabella, who desires to see the heathen become Christians. To assemble a crew, Columbus even enlists prisoners by guaranteeing their freedom. One sailor frequently reads aloud from the Bible during the voyage.

Of course, Columbus’ journey was successful. Even so, the outstanding cinematography and positive portrait of Columbus’ faith in God is truly remarkable, and the light of the Gospel flares across the screen. However, there is implied sexual impropriety, some violence and native nudity, although no offensive language. Even so, CHRISTOPHER COLUMBUS: THE DISCOVERY is the best epic motion picture in many years, reminiscent of the Golden Age of Hollywood.