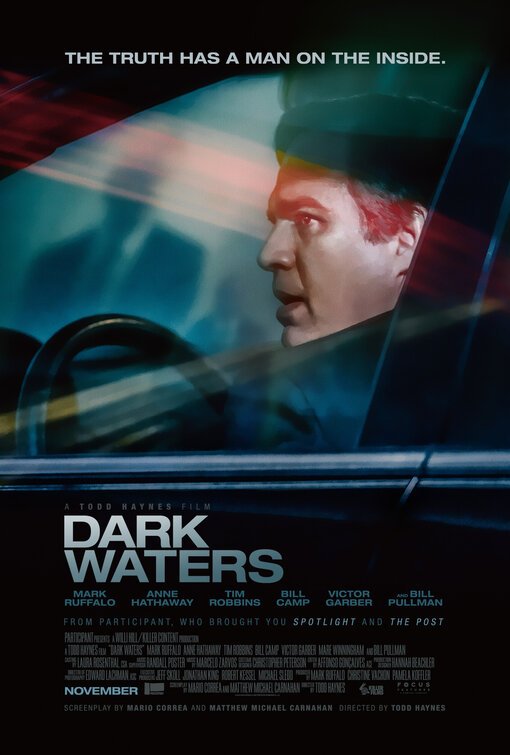 DARK WATERS is a legal drama about chemical pollution. Robert Bilott is an attorney working for a big corporate law firm in Cincinnati, Ohio. Robert’s firm focuses on defending corporations being sued for some malfeasance, especially in pollution cases. However, encouraged by his grandmother, Robert takes the case of a farmer in her West Virginia hometown, whose cows have been killed by a chemical poison in a nearby stream next to a landfill owned by the local DuPont chemical factory. The farmer’s case leads to bigger outrage and more lawsuits for several thousand local residents.

Based on a true story, DARK WATERS is an intense, captivating legal drama with passionate, heartfelt, poignant moments. Led by Mark Ruffalo and Anne Hathaway, the acting is superb. DARK WATERS avoids becoming a shallow politically correct, environmentalist diatribe like other movies of its kind. The movie has a strong moral worldview with strong, overt, inspiring Christian references. It promotes truth, justice, compassion, perseverance, and dedication to helping others in need. Sadly, however, DARK WATERS is marred by too much strong foul language. So, MOVIEGUIDE® advises extreme caution.

(BBB, CC, PP, LLL, V, S, A, D, M):
Dominant Worldview and Other Worldview Content/Elements:
Very strong moral worldview exalting truth, justice, compassion, dedication to helping others in need, and perseverance, with positive overt Christian content that provides the implied spiritual background to the hero’s ethics and includes a couple church scenes with hymn singing, prayer, images of Jesus on the Cross, images of crosses, and references to the protagonist’s family being Catholic (but no controversial theological statements or disputed theology that might upset Protestants), plus some Pro-American elements where the average American citizen is lauded and defended against powerful villainy
Foul Language:
16 to 19 obscenities (several “f” words), 10 strong profanities (three GDs, seven involving Jesus), five light profanities
Violence:
A cow deranged from chemical poisoning charges two men and one man falls down before the other man shoots the cow dead, plus a few images of diseased cow teeth and diseased cow organs
Sex:
No sex scenes but a teenage Catholic boy mentions his belief that Mary Magdalene was a “hooker,” and his younger brother says the word to use is “prostitute”, while the boys’ mother admonishes them for discussing the subject
Nudity:
No nudity
Alcohol Use:
Some alcohol use
Smoking and/or Drug Use and Abuse:
Brief smoking but no illegal drugs (protagonist takes pills for his health); and,
Miscellaneous Immorality:
Corporate malfeasance, company reneges on an agreement, and people shun two farmers who sue the local factory that provides most of the jobs in town, but all is rebuked.

DARK WATERS is a legal drama about the Cincinnati corporate lawyer who almost single-handedly led the investigation and the winning legal suits against the DuPont chemical company for poisoning the water in his grandmother’s hometown in West Virginia. One of the year’s best dramas, DARK WATERS is a thoroughly absorbing and often passionate, poignant tale about righting a great wrong and includes a strong moral worldview with strong, overt Christian content, but it could use a little more humor and jeopardy and contains too much strong foul language.

Robert Bilott is an attorney working for a big corporate law firm in Cincinnati, Ohio, which focuses on defending corporations being sued for some malfeasance, especially pollution cases. One day in 1998, two farmers from his grandmother’s hometown of Parkersburg, West Virginia, near the Ohio border, show up at Robert’s office asking to see him about a situation where one farmer’s cows have been dying from possible pollution from the nearby DuPont plant. That farmer, Wilbur Tennant, tells Robert that Robert’s grandmother told him Robert would help him. Robert tries to tell Wilbur that his firm only represents accused companies, not plaintiffs, and Wilbur walks away disgruntled.

However, Robert decides to drive to Parkersburg to talk to Wilbur at his farm. Wilbur shows Robert the grave sites of dozens of his cows. He also shows him diseased teeth and organs from his dead cows and a landfill owned by DuPont that contains chemical waste and is located near the stream where Wilbur’s cows get their drinking water. Not only have Wilbur’s cows been dying, they’ve also been acting deranged and charging after Wilbur and other people.

Impressed by Wilbur’s evidence, Robert decides to take his case. Robert knows the regional head of DuPont and asks him about the case. The man is a little miffed that Robert is helping Wilbur sue DuPont, but he agrees to send Robert some documents about the landfill in question.

After looking over the documents, Robert has a question about one of the chemicals listed in the docs. When he gets stonewalled by DuPont, he confronts the DuPont bigwig, who starts getting really mad. When he says no to Robert’s request, Robert files a court motion for all the documents related to the mysterious chemical. DuPont ends up sending Robert about six loads of documents going back to the 1960s. Dozens of boxes fill one of the storage rooms at Robert’s company building to the ceiling. Exasperated, Robert opens one of the boxes, spills some papers on the floor and starts organizing and pouring over them.

Eventually, Robert discovers that the chemical in the landfill that contaminated the farm’s nearby stream are part of DuPont’s Teflon® coating products. DuPont invented Teflon® in the 1960s for non-stick cooking pans and numerous other industrial and even medical devices and products, such as catheters. Robert also discovers that DuPont knew the chemical damaged wildlife and even caused cancer and birth defects in humans. Armed with a bunch of facts and data, Robert gains a multimillion dollar settlement for Wilbur in 2001, but Wilbur himself is now suffering from cancer that’s probably been caused by DuPont’s landfill pollution.

The movie takes a big turn at this point when Robert uncovers an even bigger problem. Not only has the local DuPont plant and the DuPont landfill polluted the water on Wilbur Tennant’s farm but they’ve also polluted the drinking water for the entire town of Parkersburg and part of the Ohio River running along the borders of West Virginia, Ohio and Kentucky! Robert starts more lawsuits for several people in the town. At one point, a new state law in West Virginia against pollution leads DuPont and Robert’s growing list of plaintiffs to agree to abide by a scientific study by an unbiased panel of scientists.

The scientists take all the information from DuPont and Robert and start conducting their own tests and investigation. However, as the years drag by, the local townspeople working for DuPont become more and more angry with Robert, Robert’s wife becomes upset about Robert spending so much time away from the family for the DuPont pollution cases, and Robert even becomes afraid for his life.

Based on a true story, DARK WATERS is an intense, captivating legal drama with passionate, heartfelt, poignant moments. Mark Ruffalo stars as the corporate lawyer who takes the farmer’s case against DuPont. Anne Hathaway stars as the lawyer’s wife. Both give superb performances. That said, the movie could use a bit more humor and jeopardy. In one scene, for example, the filmmakers have the lawyer fearful about getting into his parked car that’s been sitting alone on an empty public garage floor. The lawyer closes his eyes when he goes to start the car, as if there might be a bomb attached to the engine. Despite this, the movie has no other moments leading up to this scene. So, the jeopardy the character seems to feel here doesn’t really connect. Even so, DEEP WATERS contains enough dramatic intensity, well-written dialogue and heartfelt scenes to satisfy all but the most demanding moviegoers.

DARK WATERS avoids becoming an environmentalist, anti-capitalist, politically correct diatribe like other movies of its kind. As the public record shows, DuPont eventually settled most, if not all, of these recent pollution cases in favor of the plaintiffs. The chemicals involved in Teflon® coating do seem to have dangerous if not deadly side-effects. In fact, some experts recommend that, instead of Teflon-type coatings, people should use baked enamel or porcelain cookware if they want a nonstick pot or pan. As a movie about pollution, DARK WATERS shows that science isn’t always the boon to humanity that people believe, but can have negative consequences that must be taken seriously and even avoided. Of course, the same can be said about any human endeavor, including business and religion. In this light, it’s important to note that the man-made chemical that’s the culprit in DARK WATERS is allegedly not biodegradable and can be found in the bodies of 95 percent of all people in the United States.

DARK WATERS has a strong moral worldview. The movie promotes truth, justice, standing up for everyday people, compassion, perseverance, and dedication to helping others in need. It also has strong Pro-American elements where the average American citizen is lauded and defended against powerful villainy. Surprisingly, DARK WATERS also has a strong amount of positive, overt Christian content. The lawyer’s family is Catholic. There are two church scenes with hymns being sung. There are also images of Jesus Christ on crosses and of standalone crosses. This Christian content clearly provides the background for the hero’s ethics and his wife’s support for her husband.

Sadly, though, DARK WATERS is marred, like too many of Hollywood’s movies today, by too much strong, gratuitous foul language. The strong obscenities and especially profanities in the dialogue add nothing to the story, plot or characters and will hurt the movie at the box office, as annual economic analyses of the box office continue to show. A little bit of foul language goes a long way, and a lot of it is absolutely superfluous. See our CONTENT section for details.