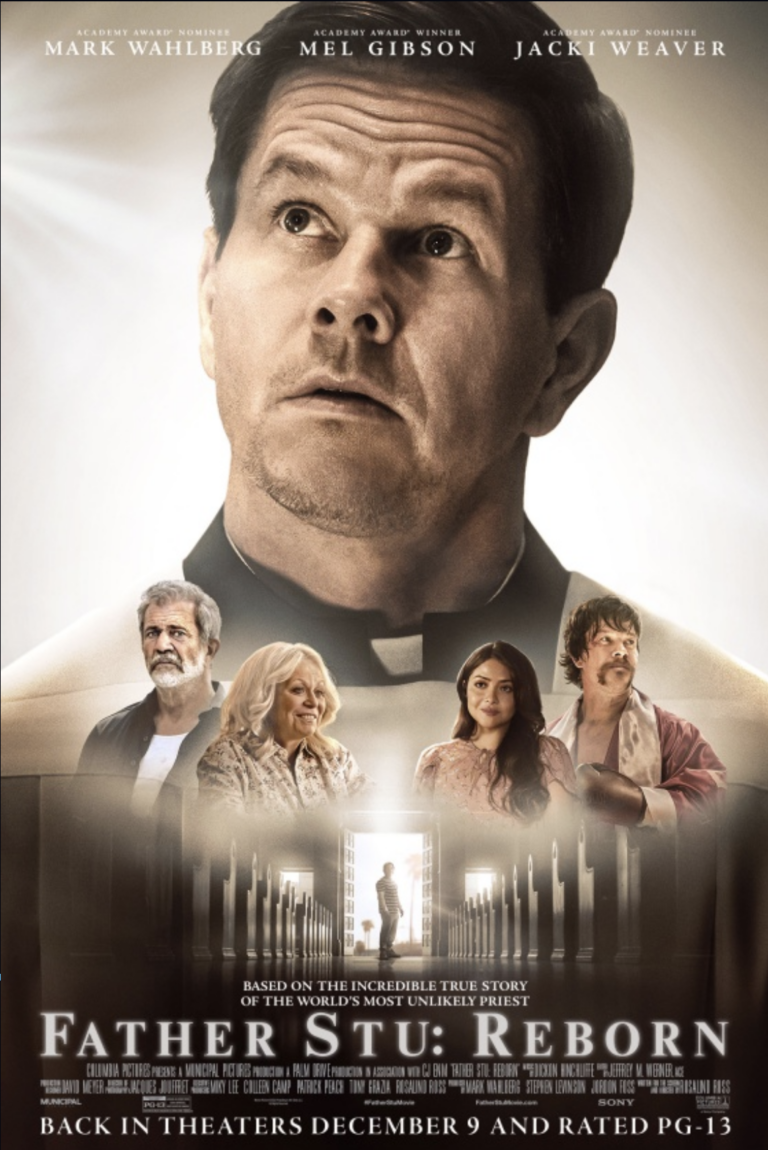 FATHER STU: REBORN stars Mark Wahlberg as a rough man with a hard life. Stu has been so beaten up in the boxing ring that his doctor tells him he must stop boxing or die. So, he moves to Hollywood and gets a job as a butcher while pursuing acting. At his grocery store, Stu meets Carmen, a beautiful woman. Carmen tells Stu she will only see him if he comes to church and helps her teach Sunday School. One night, after drinking too much, Stu gets on a motorcycle and is hit by a car. Will Stu change his ways and follow God?

FATHER STU: REBORN has a powerful Christian worldview about everyone being able to change and be transformed by Jesus Christ. FATHER STU: REBORN is also a very entertaining, well-made and well-acted movie that’s been modified from the original R-rated version, FATHER STU. This version has less foul language, though it still has some light sexual commentary and some cursing. FATHER STU: REBORN has some witty humor but also several touching moments that will melt your heart.

(CCC, BB, Ho, L, VV, S, N, AA, D, M):
Dominant Worldview and Other Worldview Content/Elements:
Very strong Christian worldview with strong moral content from a Catholic perspective where Jesus appears to a man, the Virgin Mary appears to a man, man comes back to life after prayer, confession occurs, a Jesus statue is shown, man hits Jesus figure, but nothing happens to it, and there’s redemption and transformation by the appearance of Jesus, plus there’s a reference to a homosexual encounter, and one man is shown dressed in women’s clothes
Foul Language:
Seven obscenities and two profanities
Violence:
Some strong fight scenes and other violence, such as a bar fight, man gets hit by a car, a boxing fight with blood, and a man hits another man
Sex:
It’s implied that one man is doing a sexual act for another man, there’s implied sex outside of marriage, and a man dressed in women’s clothes is shown walking around
Nudity:
Upper male nudity
Alcohol Use:
Some drinking and drunkenness
Smoking and/or Drug Use and Abuse:
Smoking, but no drugs; and,
Miscellaneous Immorality:
Some lying.

Based on a true story, FATHER STU: REBORN stars Mark Wahlberg as a rough man with a rough life until one day a beautiful woman leads him to church. FATHER STU: REBORN is a powerful, touching drama, with a strong Christian worldview, about a man transformed by Jesus Christ, but it has some foul language and heavy themes.

Stuart, known as Stu, has had a rough life. Due to his love of boxing, he’s been beaten up very badly in the ring. The doctor tells him and his mother that if he continues fighting, he won’t live. Stu’s mother gets nervous about this idea and tells him he must find a new career. So, Stu packs up what he has and moves to Hollywood to try his hand at acting.

When Stu gets to Hollywood, he gets a job at the grocery store as a butcher to pay for his expenses. While at work, Stu sees a beautiful girl, Carmen, coming shopping. Carmen won’t pay any attention to Stu, but he finds out she goes to the local Catholic church. So, of course, Stu decides to go to church too. Stu is a fish out of water in the church and even critiques the mass, but afterwards he gets lunch and sees Carmen. Carmen tells Stu the only way he can see her is if he goes to Sunday School and helps her teach the class with the children.

Stu starts to go to church and to Sunday School with Carmen, but he hasn’t made a change in his life yet. One night, after drinking too much, Stu gets on a motorcycle and is hit by a car. Once this happens, his entire life changes forever. Will Stu’s life be redeemed, transformed and saved?

FATHER STU: REBORN has a powerful Christian worldview about everyone being able to change and be transformed by Jesus Christ. Also, FATHER STU: REBORN is an entertaining, well-made movie. It has some witty humor but also touching moments that will melt your heart. Toward the last third, the story turns directions, and the issues and plotline change a bit. Despite this, FATHER STU: REBORN is constantly entertaining. The movie, which has been re-edited to get a PG-13 rating, has some cursing and implied sexual themes, however.