FINAL FANTASY: THE SPIRITS WITHIN

"The Demons of Gaia or Invasion of the Spirit Snatchers" 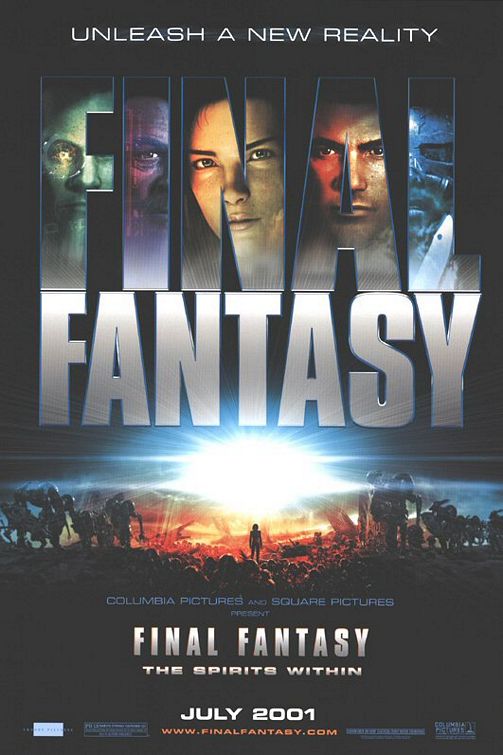 FINAL FANTASY: THE SPIRITS WITHIN is an animated New Age pagan science fiction fantasy with alien ghosts and demonic possession. In the story, a young woman named Aki is possessed by one of the alien phantoms invading earth. The ghost is slowly consuming her soul. Aki and her friends must battle a hawkish general so that they can transform the ghosts from negative beings who eat the spirits of humans to positive beings and thus save the spirit of the Earth, or Gaia.

FINAL FANTASY is very clear on its theology, with one character giving long lectures about Gaia. Actually, the movie would be much more exciting without these lectures. Regrettably, in the minds of too many children, FINAL FANTASY is going to be an infomercial for New Age, occult beliefs. It won’t take long for children to realize that the bad people are the people who don’t accept the concepts of Gaia or of friendly phantoms who consume human spirits. Movies like this are an all-out assault, intentional or unintentional, on the Christian faith. We need to protect the innocence of our children, and we need to deliver them from the demons of our age.

The movies of the summer of 2001 have been plagued by poor plot structure, extreme anti-Christian philosophies, whether occult or New Age, excessive violence and/or sex, and a strange compulsion to bring video and computer games to the big screen.

And, The Hollywood Reporter wonders why the box office is down.

This diminished box office could be passed off as the just rewards for loosing touch with the audience if it were not for the fact that children and sometimes even the adults who do see these mediocre movies too often get their theology from them. For instance, the day of this review, Bianca Jagger was accusing President Bush of harming Gaia, the Spirit of “Mother Earth.”

Regarding the impact on children, a book about Columbine victim Cassie Bernell, SHE SAID YES, talks about her infatuation with the occult, vampires and Marilyn Manson before she came to Christ. In a friend’s letter to her, she wrote about the sexiness of black clothes and makeup and “a Satanic church cult thing where you have to drink a kitten’s blood to get in.” Another letter said, “Kill your parents!” and was accompanied of an illustration of her mother and father strung up by their intestines. The book says many of the upper middle class children at Columbine were into occultism. Clearly, we should be careful not to dismiss the underlying messages of these occult and New Age movies.

In FINAL FANTASY, it first appears as if the alien ghosts are the enemy, but soon the audience finds out that the real enemy is the people who don’t believe in the Gaia spirit. In the story, the earth has been invaded by alien phantoms, which are later found out to be the ghosts of dead aliens. Very few human beings survive. Aki Ross and her mentor, Dr. Sid, are trying to save the dwindling human race. Aki, who is possessed by one of the alien phantoms, is out to collect eight spirits so that Dr. Sid can develop an antidote to counteract the alien force. These spirits include a plant, a bird and even a little girl who died, in a very veiled reference to human sacrifice, which causes Aki a moment of remorse.

While collecting one of the spirits, Aki is attacked by the alien phantoms. They are gruesome and awful. She is rescued by Capt. Gray Edwards and his elite squadron. It turns out that they have a thing for each other. However, Gray does not know that Aki has an alien insider her which has been contained by Dr. Sid’s invention of a breastplate empowered by some of the spirits she’s collected.

At night, Aki dreams of an alien planet where a massive alien war took place. She realizes the aliens are trying to communicate with her. In the battles with humans, the aliens feed on the human spirits of dead people. Aki finally realizes the aliens are just poor lost ghosts, and the key to the problem is transforming them into good beings through the wave harmonics of the eight spirits, and thus save Gaia, the conscious spirit of “Mother Earth.”

The bad guy in this New Age cartoon fantasy is the hawkish General Hein, who doesn’t believe in Gaia or spirits and lost his family when San Francisco was destroyed by the alien ghosts. His solution is to blow the aliens to smithereens, but Dr. Sid points out that this will hurt Gaia. Therefore, the race is between Aki and Dr. Sid and General Hein. Will Aki and Dr. Sid solve the problem before General Hein blows up the Earth, and Gaia, to smithereens?

Of course, there are many plot holes in this storyline. What happens to the ghosts of the human beings when they are killed by the alien ghosts? Why don’t they rise up themselves against the alien ghosts? How is it that Aki and Dr. Sid can find these beneficial spirits? How did General Hein, who seems to be such a dunce, become a general?

These plot holes and many others will not bother fans of the game, however. Directed by Hironobu Sakaguchi, the inventor of the video game, FINAL FANTASY is a visual feast. He has brought his attention of detail to the design of all new hyper-real animated characters. They call this 3D animation, but it’s not the 3D that you see at Disney World, which leaps off the screen. Instead, it’s just the construction of animated human looking characters who have width, depth and height.

Even with all the brilliance put into constructing these characters, they still don’t have the appeal of real people. What many of these movies forget is that people relate to people, no matter how hard they want us to relate to the suffering of the phantoms, ghosts or “the others.”

FINAL FANTASY is very clear on its theology, with Dr. Sid giving long lectures about Gaia. Actually, the movie would be much more exciting without these long lectures. The battle sequences are good; the action handled well; but, the philosophizing slows down the story.

Regrettably, in the minds of too many children, FINAL FANTASY is going to be an infomercial for New Age, occult beliefs in Gaia. It won’t take long for children to realize that the bad people are the people who don’t accept the concepts of Gaia and of the friendly phantoms who just happen to consume the spirits of humans. There’s confusing language about faith in the movie, but it’s not faith in a biblical sense, and it’s not a theistic, God-created world.

Modern computer animation and graphics has allowed some of the movies this summer to refurbish ancient religious concepts that have kept many in bondage. These movies are an all-out assault, intentional or unintentional, on the Judeo-Christian faith. They inform and support the silly celebrities like Bianca Jagger who accuse the President of hurting Gaia. Worse, they capture the imaginations of children like Dylan Klebold and Cassie Bernall.

We need to protect the innocence of our children. We need to deliver them from the demons of our age. And, we need to take a strong stand against the invasion of the spirit snatchers.