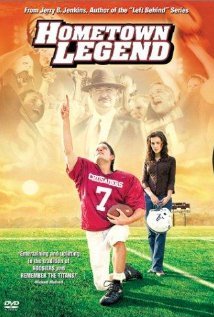 HOMETOWN LEGEND opens with Rachel Sawyer, a Southern girl in Athens, Alabama, praying to God to help save the town high school, which county officials have decided to close. Elvis Jackson, an orphaned teenager, comes to town to try to win the football scholarship named after Coach Buster Schuler’s son, who died 12 years ago in a tragic accident on the field. Coach Schuler comes out of retirement to coach the football team one last time, but clashes with many of the players, including Elvis and Schuler’s nephew, Brian, the star quarterback who also wants to get the scholarship. Rachel angers Elvis when he finds out that she’s on a campaign to use the scholarship money to save the school.

HOMETOWN LEGEND is a terrific, entertaining family movie that winsomely proclaims the values of prayer and faith. Terry O’Quinn (THE ROCKETEER) gives an excellent performance as Coach Schuler who, in a crucial moment, flaunts the tyrannical United States Supreme Court to lead his team in prayer. Lacey Chabert and Nick Cornish as Rachel and Elvis also deliver appealing, earnest performances. HOMETOWN LEGEND will win the hearts, minds and souls of everyone in the audience.

(CC, BB, L, VV, M). Christian worldview with prayers & appeals to God, & solid moral values taught; 3 obscenities & some vulgarities; plenty of football violence & some fighting, plus football coach gets angry & throws things at times; no sex but some kissing; no nudity; some apparent alcohol use by adults; no smoking; and, selfishness & disunity strongly rebuked.

HOMETOWN LEGEND is an entertaining sports movie about an underdog high school football team in Alabama. Full of old-fashioned values, including Godly prayer, it is designed to appeal to regular folks, including football fans, families and people of faith.

The movie opens with a high school championship game in Athens, Georgia. The star quarterback ignores instructions from his father, Coach Buster Schuler, and becomes fatally injured during the last play of the game. The coach immediately retires, and the football program, and the local high school, falls into disrepute.

Flash forward to 12 years later. Rachel Sawyer, a young Southern girl, is praying to God to help save the high school, which county officials have decided to close. Meanwhile, an orphaned teenager named Elvis Jackson comes to town to try to win the scholarship named after Coach Schuler’s son. Coach Schuler comes out of retirement to coach the football team one last time, but clashes with many of the players, including Elvis and Schuler’s nephew, Brian, the star quarterback who also wants to get the scholarship. Unhappily, Coach Schuler’s running offense doesn’t seem to suit Elvis, Brian and the other quick, light players on the team.

As the players dwindle one by one, Elvis, Brian and Coach Schuler stick it out, helped along by more prayers from Rachel. Unhappily, however, Rachel angers Elvis when he finds out that she’s on a campaign to use the scholarship money to save the school. Desperate, Coach Schuler turns to a passing offense, and the team starts to take off in the standings. Elvis also starts to take off as the team’s star passing receiver. Will romance blossom between he and Rachel, despite their differences? Also, will Elvis find out that some things are bigger than finding personal success?

HOMETOWN LEGEND is a very good family movie. It is also a very clean one, though it does contain some light obscenities and vulgarities. The editing is superb, with freeze frames and snap cuts heightening the drama. The music also deserves to be commended for underlining and enlivening the story.

Terry O’Quinn (THE ROCKETEER) gives an excellent performance as Coach Schuler. He may remind many viewers of some of Robert Duvall’s great performances as Southern characters. He deserves an Oscar nomination for this role. Lacey Chabert and Nick Cornish as Rachel and Elvis are also very good. They are earnest, appealing performers that will provide excellent role models for teenagers. Of course, Elvis is a darker character than Rachel, but he eventually does the right thing.

As is the case with many low budget movies, HOMETOWN LEGEND drags slightly for a lack of clear jeopardy at one point and telegraphs its emotions too strongly at another. A stronger eye toward building the climactic moments in the movie to a higher crescendo probably would help, along with, perhaps, some additional humorous moments toward the end. However, these flaws are minor compared with the plot holes in big Hollywood movies such as the remake of PLANET OF THE APES.

Therefore, MOVIEGUIDE® highly recommends HOMETOWN LEGEND and hopes and prays that HOMETOWN LEGEND will become a legend at the box office. This movie must be seen, and, if it is, it will win the hearts, minds and souls of everyone in the audience. HOMETOWN LEGEND is a champion.