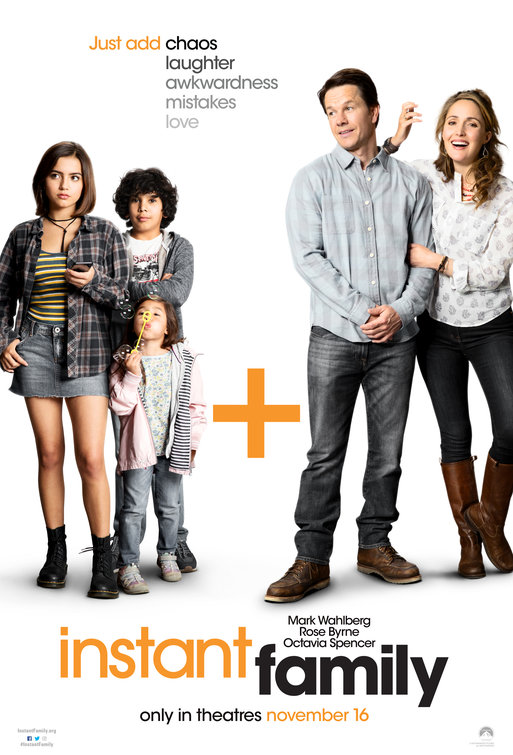 INSTANT FAMILY stars Mark Wahlberg as a housing contractor named Pete, who buys shoddy homes and works with his wife, Ellie, to flip them. They finally realize they might want children after years of denying it. They decide to adopt, with Ellie exploring foster care sites. Working through two social workers, they join a support group designed to teach them about the difficulties inherent in adopting foster kids. They pick a pretty but feisty 15-year-old girl named Lizzy, only to find she has a younger brother and sister she can’t abandon. The children turn Pete and Ellie’s life upside down.

INSTANT FAMILY is consistently engaging, funny and touching as both entertainment and a call for others to open their hearts and adopt more children from the foster system. The movie has a depth in casting that goes well beyond most such films. INSTANT FAMILY has a strong Christian, moral worldview with positive references to prayer. However, there’s too much gratuitous foul language and a couple scenes with a positive depiction of a homosexual male couple adopting a child. MOVIEGUIDE® advises extreme caution.

(CCC, BBB, FR, Ho, LLL, V, A, M):
Dominant Worldview and Other Worldview Content/Elements:
Strong Christian, moral worldview about a married Christian couple who decides to adopt a teenager in the foster system who has two younger siblings, another Christian couple is depicted, and a social worker is also a Christin, undercut by an antinomian, gratuitous use of foul language and a homosexual male couple trying to adopt is depicted in a positive light in two scenes;
Foul Language:
About 42 obscenities (including one “f” word and at least 12 “s” words), at least two strong JC profanities, and three light profanities, plus an obscene gesture;
Violence:
One scene where a parent punches a creepy adult male in his 20s trying to woo their underage daughter, then they kick him in the crotch a couple times;
Sex:
No sexual content other than the scene with the creepy man in his 20s mentioned above;
Nudity:
No nudity;
Alcohol Use:
Brief alcohol use;
Smoking and/or Drug Use and Abuse:
No smoking or drugs; and,
Miscellaneous Immorality:
Teenage foster girl is extremely rude to her adoptive parents early on in numerous scenes of disrespectful comments and one middle finger, but she changes in the end and turns out to be loving and grateful.

INSTANT FAMILY is the story of a married couple who have postponed having children of their own but then try adopting a trio of foster siblings, who turn their lives upside down. Inspired by a true story, INSTANT FAMILY has a strong Christian, moral worldview undercut by too much foul language and some other elements.

The movie shines a remarkable light on the plight of foster children, particularly older ones, by telling the story of a suburban couple who experience an emotional rollercoaster when they adopt three troubled siblings from the foster system. Directed by Sean Anders from a screenplay he co-wrote with frequent collaborator John Morris (DADDY’S HOME, DADDY’S HOME 2), the story is rooted in his real-life experiences adopting foster children. That personal connection gives the film an impressive emotional honesty along with a hearty sense of humor.

Mark Wahlberg stars as a housing contractor named Pete, who buys shoddy homes and works with his wife, Ellie (Rose Byrne), to flip them. The couple realize they might want children after years of denying it. They decide to adopt, with Ellie exploring foster care sites. She hopes to make a genuine impact on a troubled life while also figuring that she and Pete will have it easier with an older child than raising an infant, thus skipping the early crying years.

Working through a pair of social workers, a by-the-book woman (Tig Notaro) and her sassy partner (Octavia Spencer), they join a support group designed to teach them about the difficulties inherent in adopting foster kids. They pick a pretty but feisty 15-year-old girl named Lizzy (Isabela Moner), only to find she has a younger brother and sister whom she can’t abandon.

Thus, the couple suddenly has three children on their hands, and no idea what they’re facing both on hilarious comedic levels and on heartbreaking dramatic ones. They face down skeptical family members, earning the love and trust of the kids, and encountering numerous misadventures along the way. As a result, the movie is consistently engaging as both entertainment and a touching call to action for others to open their hearts and adopt more children from the foster system.

Wahlberg has developed a truly winning persona as a kind-hearted father figure in the two DADDY’S HOME movies and proves here that the third time with Writers Anders and Morris is the charm. A devout Catholic who overcame a hardscrabble childhood himself on the streets of Boston, he made INSTANT FAMILY as a passion project. Kudos not only to him and the writers but also to Paramount Pictures for investing in the movie.

INSTANT FAMILY has a depth in casting that goes well beyond most such films. Rose Byrne as Wahlberg’s wife continues her string of charming and funny roles. She brings a winsome charm to bear that’s especially effective when she’s striving to crack the emotional defenses of the three children. However, the real discovery in INSTANT FAMILY is newcomer Isbabela Moner as Lizzy. She displays a vibrantly real emotional range that signals she could be a big star and major talent to watch. Byrne, Moner and Wahlberg are backed by an ace supporting cast of Oscar nominee Octavia Spencer (THE HELP) as well as top comics Tig Notaro as the no-nonsense social worker and Iliza Schlesinger as a single mom comically obsessed with adopting an athletic African-American boy.

Happily, INSTANT FAMILY has a strong Christian, moral worldview that spotlights a positive Christian family with two serious and one good-naturedly comical prayer scenes. Also, there’s another positive Christian couple in the support group. This is remarkable for a mainstream Hollywood movie and should be encouraged.

However, the movie has too much gratuitous foul language, which includes one “f” word, two uses of Jesus Christ’s name in vain, and more than 40 other obscenities, plus a few profanities. Also, there’s a positive depiction in a couple scenes of a homosexual male couple adopting a child.