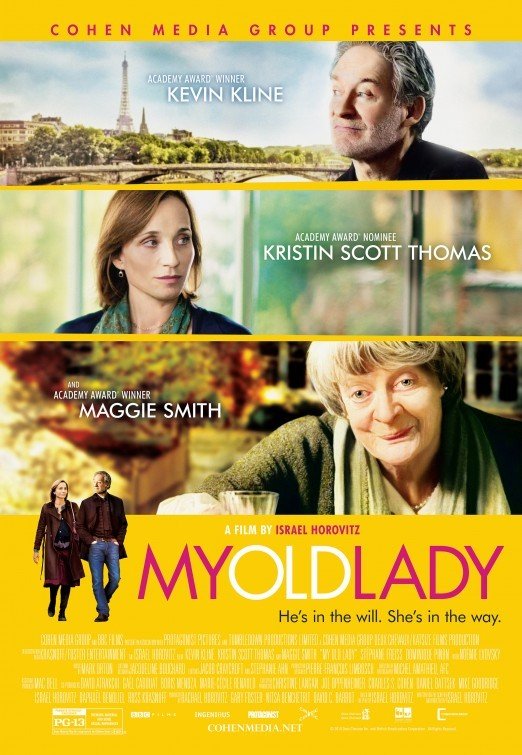 MY OLD LADY starts off as a wry, winsome comedy but then turns into an overwrought drama about past infidelity, alcoholism and possible incest. A 57-year-old American man coming to take a look at the nice Parisian apartment he inherited from his father. He discovers his father’s old, now elderly, mistress living in the apartment. Much to the son’s chagrin, a byzantine French law says he can’t remove the woman from the apartment and sell it until she dies. The son develops an interest in the woman’s daughter, but the past love triangle of his father, the woman and his mother comes back to haunt them all.

The opening of MY OLD LADY is very funny and winsome as the middle-aged son tries to navigate his way around the elderly woman, her daughter and French real estate laws. However, things turn extremely serious when these three characters reveal some tragic details about their pasts. Eventually, the movie becomes a bit overwrought, with too many moral problems, including a couple strange references to incest. MY OLD LADY also contains some brief foul language.

(PaPa, RoRo, B, L, V, S, AA, D, MM) Strong mixed pagan worldview with strong Romantic and some moral elements as three characters, a middle-aged man, a middle-aged woman and the woman’s elderly mother ponder the negative consequences of the mother’s illicit affair with the man’s estranged father; about four obscenities and three light profanities; no depicted violence but a couple stories about a disturbing suicide and a suicide attempt; implied fornication and implied oral sex, and references to adultery and possible incest but the possible incest turns out not to be true, though another character excuses it; no nudity; alcohol use and protagonist is an alcoholic with a hurting past who goes off the wagon and gets drunk several times; smoking; and, man steals an old table and some lamps from an elderly lady to get money to pay an unexpected fee to her but he learns his father gave the woman the furniture and crazy law allows people to invest in property where the sooner a tenant dies, the more money the investor makes.

MY OLD LADY starts off as a wry, winsome comedy, but then turns into an overwrought drama about past infidelity, alcoholism and possible incest. The comedy is fun, but the drama, including a couple scenes that nearly endorse the idea of adult incest, becomes uncomfortable to sit through, in more ways than one.

The movie begins with a 57-year-old American man, Mathias Gold, played by Kevin Kline, coming to take a look at the nice Parisian apartment he inherited from his father. He’s surprised to learn that the 92-year-old English lady living there, Mathilde Girard, is impossible to move out because of a weird French property law. You see, Mathias desperately needs the money he could get from the sale of the apartment, but, under the law, Mathilde can stay in the apartment until she dies. Not only that, but Mathias actually has to pay Mathilde a monthly fee while she’s living there because his father originally bought the apartment from her and still owed her that money. In effect, the law is so crazy that, the quicker the tenant dies, the more return the investor gets on his money!

For some strange reason, however, Mathilde allows Mathias to stay there while he sorts out his affairs, so long as he pays her the next month’s fee. Mathias has nowhere else to go, so he agrees to her offer while he secretly tries to find some way to get around the law allowing Mathilde to stay.

Making things more pleasant is the fact that Mathilde’s daughter, Chloé, who’s nearly Mathias’s age, also lives in the three-story apartment. Unhappily, however, Chloé is highly suspicious of Mathias and doesn’t get along with him at first.

She softens when they discover a common ground of childhood pain and neglect. Mathias even manages to shame Chloé into giving up her affair with a married man with two young daughters. Everything is turned topsy-turvy when Mathilde unveils some secrets about her past that rock Mathias and Chloé’s world.

The opening of MY OLD LADY is very funny and winsome as Mathias tries to navigate his way around Mathilde and byzantine French real estate laws. Mathilde married a Frenchman who was into big game hunting, so some of the back rooms in the apartment, including the bedroom Matthias is given, still have some stuffed animal heads. This and other things in the movie’s first part make for some funny bits.

Then, however, things turn extremely serious as Mathias reveals the reason he doesn’t have much money is because he is an alcoholic. Though in recovery, Matthias still is suffering the consequences of that problem, which also stems in part from his difficult relationship with his father. The secrets that Mathilde unveils about her past exacerbate his alcoholism, and Mathias goes off the wagon. Mathilde’s secrets also bring to mind some past hurts Chloé has suffered.

Based on an acclaimed 2002 play by Israel Horovitz, who directs his own film version, MY OLD LADY seems to follow in the realistic tradition of playwrights like Henrik Ibsen and Tennessee Williams. In that tradition, terrible secrets are revealed about a character or group of characters that changes the way they look at one another, their past and their lives. By extension, the audience members are supposed to glean insights from the play about their own lives, including the society in which they live.

The problem is, this tradition can become cliché, too familiar and overwrought, despite expert acting and directing. This seems true of MY OLD LADY, where the male protagonist, Mathias, not only has an alcohol problem, but also has had a very troubled relationship with his late father. Here, the story piles even more things onto the protagonist’s tragic situation, including the fact (SPOILERS FOLLOW) that Mathilde had a long-running affair with his father, an affair that eventually provoked his mother to commit suicide in front of him when he was a teenager. Of course, all this knowledge brings back the protagonist’s alcoholism. In addition, Chloé begins to wonder whether the reason her own father seemed distant from her was the fact that he thought she wasn’t his real biological daughter, but the daughter of his wife’s lover. If this is true, perhaps Mathias is actually the son of Mathilde! Here’s where the idea of possible incest between Mathias and Chloé comes into play. In fact, in one scene, Mathilde makes the suggestion that Mathias and Chloé shouldn’t feel guilty about any momentary incest between one another because they clearly need the affection of another person who understands the things they’ve gone through in their lives. Conveniently, the movie nixes this idea when Matthias has Mathilde’s doctor run a DNA test on him, and the test shows that Mathias is not related to Mathilde in any way. That said, the suggestion has been made, that adult incest between a sister and a brother is not always a bad idea! Also, although Mathilde’s past adultery is condemned, it does eventually bring Mathias and Chloé together, so Mathias and Chloé eventually come to terms with it, perhaps a little too easily considering all the pain it’s caused.

Ultimately, therefore, MY OLD LADY can’t be considered acceptable drama. It’s pretty much a misfire on all the levels where it really counts. Thus, although the ending is somewhat positive, the dramatic parts leading up to that ending are sometimes unpleasant and have too many moral, dramatic problems. MY OLD LADY also contains some brief foul language.