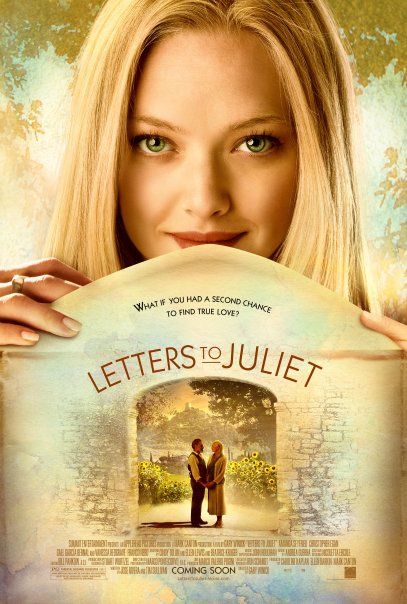 LETTERS TO JULIET is a surprisingly chaste, charming, entertaining movie with some cute humor. Sophie is engaged to Victor who opening an Italian restaurant in New York City. They travel to Italy where Victor is more interested in recipes and wines than in Sophie. Sophie writes a response letter to a fifty-year-old “letter to Juliet” (a reference to Shakespeare) from Claire at a sort of “wailing wall” in Verona, Italy. Her letter draws Claire and her grandson Charlie from London to Italy in search of the long-lost heartthrob. Claire and Sophie quickly become friends while Charlie complains about the lunacy of the whole idea.

LETTERS TO JULIET has a Romantic worldview, combined with references to Destiny, answered prayer and very Christian sacramental and aesthetic signs. It is rated PG for nearly a dozen light profanities and some kissing, as well as a few paintings and statues (some nude) graphically representing various mild sexual liaisons and a scene where people caress the bare breast of a statue. Even so, LETTERS TO JULIET affirms marriage literally and figuratively and is quite well written. Those who enjoy romantic movies probably will like it a lot.

(RoRo, CC, BB, LL, V, S, N, A) Strong Romanic worldview where emotional reactions take precedence, combined with references to destiny and lots of Christian sacramental and aesthetic signs and references, with strong moral elements where marriage is respected and friendship and kindness are valued; one light obscenity, more than 10 “oh my G*d” profanities, and character gives “the finger”; very light comic pratfall, impact not seen; no live sex scenes but there are clothed kisses and hugs and paintings and statues of various sexual liaisons with man and woman caressing bare breast of Juliet statue; upper male nudity when man appears in swim trunks and nude paintings and statues with man and woman caressing bare breast of Juliet statue; drinking of wine; no smoking or drugs; and, nothing else objectionable.

LETTERS TO JULIET is a surprisingly chaste, charming movie with some cute humor. Sophie (played by Amanda Seyfried) is engaged to Victor (played by Gael Garcia Bernal), who is about to open his own Italian restaurant in New York City.

Sophie and Victor go on a “pre-wedding honeymoon” to Italy that turns out to be a 24-hour a day opportunity for Victor to make connections with suppliers for his restaurant. Sophie, an aspiring writer, comes across the opportunity to write response letters to people who leave “letters to Juliet” in a sort of “wailing wall” in Verona, Italy, the site of Shakespeare’s famous play ROMEO & JULIET. When she discovers a letter behind a brick in the wall, she writes to an English woman who left her Italian romantic flame 50 years ago and went back to make her life in England.

Sophie’s letter draws Claire (played Vanessa Redgrave) and her grandson Charlie to Italy to search for Lorenzo Bartolini, the long-lost heartthrob. Clair and Sophie quickly become fast friends on the quest while Charlie complains about the lunacy of the whole idea.

This sets up a classic situation for romantic comedy, and it does not disappoint. The changing relationship between Sophie and Charlie is very well plotted and paced nicely with excellent plot points. LETTERS TO JULIET is moderately well directed with some excellent acting and some stereotypical and even self-conscious moments by the same actors, indicating uneven direction. Even so, LETTERS TO JULIET will be quite entertaining to those who enjoy Hollywood romance movies.

Viewers need to note that the movie has a strong Romantic worldview combined with references to destiny, answered prayer and Christian sacramental and aesthetic signs and references. Of course, true love comes from God and is an unfailing commitment in good and bad times. When Hollywood romances fade, godly love continues and grows stronger.

LETTERS TO JULIET is rated PG for nearly one dozen exclamatory profanities and hugs and kisses by the leads as well as paintings and statues representing graphically various mild sexual liaisons and a scene at the garden of Juliet where a woman and then a man caress the bare breast of the statue of Juliet. Also, there are nude paintings and statues.

LETTERS TO JULIET extols marriage literally and figuratively. The concept of a “pre-wedding honeymoon” sounds suspicious, but the movie doesn’t show any sexual immorality. The couple is actually separated for most of their stay in Italy.

Even so, parents should help their children and teenagers understand about true love.

Rent or Buy LETTERS TO JULIET: