"More Than Meets the Eye" 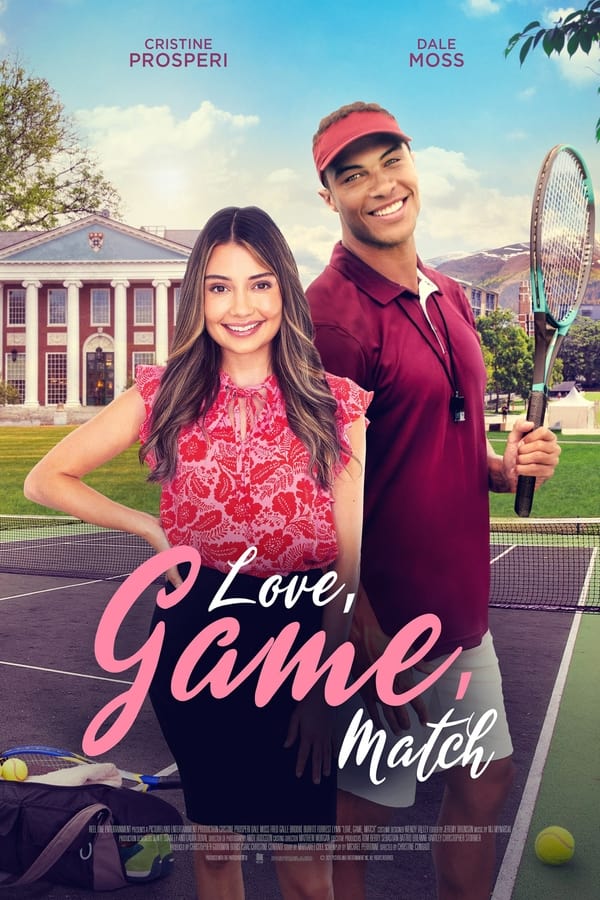 LOVE, GAME, MATCH is a light romance on UPtv about two mismatched teachers at a high school in Santa Barbara, California. Liz is the new economics teachers at Faraday High School, and Ted is the phys ed teacher and tennis coach. Much to her chagrin, Liz ends up working together with Ted on planning the school’s annual Carnival Day before school break. They butt heads a few times. However, they discover they have a lot in common. Their growing respect and affection come under attack when a jealous teacher spreads gossip about Ted that undermines his honesty and integrity.

Some lackluster, choppy editing in LOVE, GAME, MATCH slows down the movie’s pacing at times. Otherwise, the movie delivers a breezy, funny, pleasing story with an uplifting ending. The love story between Liz and Ted may seem simple and straightforward, but it has a strong thematic structure that promotes many positive values. For example, the story celebrates teachers who take time to encourage and guide students. It also stresses family, persistence, honesty, repentance, and forgiveness. Finally, LOVE, GAME, MATCH has some pro-capitalist content.

(BB, C, CapCap, V, A, M):
Dominant Worldview and Other Worldview Content/Elements:
Strong moral worldview with some light redemptive content celebrates teachers who take time to encourage and guide students and stresses family, persistence, honesty, hard work, making correct judgments, repentance, forgiveness, and even courage, plus there’s some overt but brief pro-capitalist elements about teaching students how to be an entrepreneur, the importance of competition and the need for incentives and rewards to everyone, not just to winners or the few
Foul Language:
No foul language
Violence:
Light, slightly comic violence when woman gets hit by a wayward tennis ball under her left shoulder, which smudges her white blouse before an important meeting
Sex:
No sex
Nudity:
No nudity
Alcohol Use:
Couple drinks wine at a winery to decide on what wine to raffle off to pay for carnival day at a high school
Smoking and/or Drug Use and Abuse:
No smoking or drugs; and,
Miscellaneous Immorality:
A jealous woman gossips about the lead male character who’s dating another woman, but she later repents and apologizes when it becomes clear to her and everyone else that the couple is made for each other.

LOVE, GAME, MATCH is a light romance on UPtv about two apparently mismatched teachers who work together on their high school’s annual Carnival Day and discover they have a lot in common, despite some superficial differences and misunderstandings. Some lackluster, choppy editing in LOVE, GAME, MATCH slows down the movie’s pacing at times, but the movie has a breezy, funny, pleasing story that celebrates teachers who take time to encourage and carefully guide their students and stresses family, persistence, hard work, honesty, repentance, and forgiveness.

Liz is the new economics teachers at Faraday High School, and Ted is the phys ed teacher and tennis coach. Much to her chagrin, Liz ends up working together with Ted on planning the school’s annual Carnival Day before school break.

At first, Liz is turned off by Ted’s cocky self-confidence. For example, when they get together for the first time to start planning the Carnival Day, he assures her that everything he does “pretty much” turns out great. However, she’s soon impressed by his good ideas for the Carnival Day and by his efforts to follow through on things that need to be done. She’s also impressed by his teaching principles, including his commitment to his students. At one point, one of his tennis players wants to quit the team because he’s having trouble improving his skills. Ted keeps encouraging the student to keep trying and keep applying the suggestions Ted gives the tennis players. “It’s the kids that struggle that need a really skilled teacher,” Ted tells Liz.

Liz and Ted’s growing respect and affection for one another come under attack when a jealous teacher spreads some gossip about Ted that undermines his honesty and integrity. Is Ted the man Liz thinks he is?

Some lackluster, choppy editing in LOVE, GAME, MATCH slows down the movie’s pacing at times. The movie’s editing transitions need some work. Otherwise, however, the movie delivers a breezy, funny, pleasing story with an uplifting ending.

The romance between Liz and Ted that lies at the center of the plot is rather simple and straightforward. However, it has many moving parts to it that bring out many positive values. For example, Liz learns to look beyond the surface-level self-confidence Ted projects to the values that drive him. Thus, she admires his teaching philosophy, especially his commitment to his students. By making a point about Ted’s commitment to his students, the story celebrates teachers who take the time to encourage and guide their students. The story shows Ted specifically teaching persistence to the one tennis player in not just one scene but two scenes.

Though Liz’s father left her mother when Liz was six, she’s still close to her mother. At one point, her mother gives her a major piece of advice about her relationship to Ted. Ted’s father also gives Ted a major piece of advice about having the courage to be more open with Liz. Also, it’s clear that Ted is close to both his mother and father. In addition, Ted’s father and mother are clearly still very much in love with one another. Their strong relationship becomes a positive model for both Liz and Ted in their budding relationship. In the end, these situations teach Liz a lesson about making correct judgments when it comes to her life and her relationships. As Jesus says in John 7:24, “Do not judge according to appearance, but judge with righteous judgment.”

Finally, LOVE, GAME, MATCH has some pro-capitalist elements about students learning how to be an entrepreneur. The movie opens with Liz presenting an entrepreneur award to two students who created the matchmaking app. The students then go on to test their app to weed out any bugs it may have. Also, at one point Liz and Ted have an argument about Ted’s commitment to the benefits of competition versus Liz’s commitment to handing out kudos to all the students in her class who participated in the entrepreneur competition. Eventually, the movie reconciles this conflict by acknowledging both the importance of competition and the importance of providing incentives and rewards to everyone, not just the winners or only to the few.

Thus, all in all, there’s a lot more to this particular UPtv romance, LOVE, GAME, MATCH, than meets the eye.