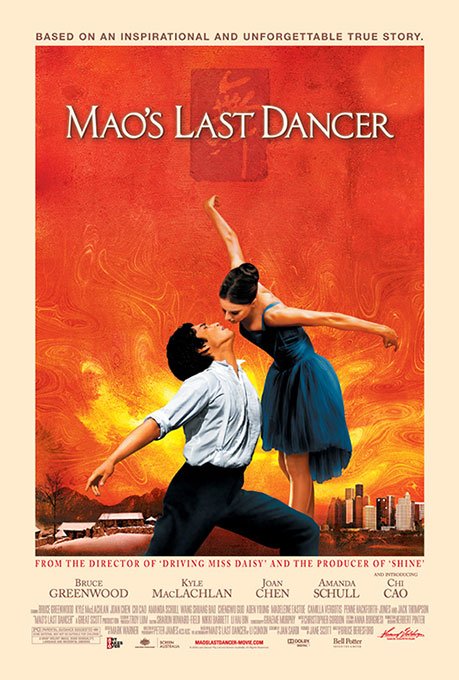 MAO’S LAST DANCER is a marvelous new movie directed by Bruce Beresford, who did the Oscar-winning DRIVING MISS DAISY and TENDER MERCIES. Li, a Chinese ballet dancer, comes to Houston as part of the first international arts exchange with the renowned Houston Ballet. As Li enters the United States in 1981, there’s a flashback to a remote Chinese village where Li is growing up in a hardscrabble existence. Communist officials take Li away from his family to train him in ballet. Eventually, the artistic director of the Houston Ballet picks Li to perform in Houston. Li has been brainwashed that communism has produced the ideal society in China and that America is a dark, impoverished land. Li slowly recognizes America offers both freedom and prosperity. He tries to stay, but Chinese officials try to stop him.

MAO’S LAST DANCER is extremely beautiful. For those who love art, it is extremely artistic. The ballet sequences are terrific. Better yet, it is a powerful, dramatic, inspiring story with great turning points. Best of all, it exposes the evils of communism and extols American values of freedom. This is a great movie for moviegoers!

(BBB, PPP, CapCapCap, ACACAC, L, V, S, N, A, M) Very strong moral, pro-American, pro-capitalist, anti-communist, pro-freedom, and pro rule of law worldview with no overt Christian content about the oppression in Communist China versus freedom in the United States in the 1980s; six light obscenities and two light profanities, plus a young boy breaks wind as a joke; grueling physical training for the ballet with people getting sprains and pains, Communist officials threaten people, and man has repeated nightmare of mother being shot by Communist firing squad; no sex scenes but some passionate kissing, woman talks about being a virgin and never having sexual relations, and provocative dancing; upper male nudity; minor alcohol use; no smoking or drugs; and, Communist oppression, lying, totalitarian government, cheating, Communist officials are blatantly deceptive, and possible homosexual character but never shown.

Bruce Beresford has directed some of the greatest movies, including DRIVING MISS DAISY, TENDER MERCIES and EVELYN. MAO’S LAST DANCER is one of the most intriguing, captivating and important movies of all time. Now, once a movie is called important, it kills the audience, but this movie is more than important, it is fascinating, and so it might find a large audience.

The story opens as Li Cunxin, a Chinese ballet dancer, comes to Houston as part of the first international arts exchange with the renowned Houston Ballet, As he enters the United States in 1981, there’s a flashback to a remote peasant village in China where Li is growing up in a hardscrabble existence. The Communist officials come to town to find suitable children to recruit into the Communist ballet. Li is chosen and taken away from his family to the ballet school in Beijing.

One of his ballet instructors, Teacher Chan, helps Li become a great ballet dancer. Regrettably, Chan has a heart for classical ballet, so during the Cultural Revolution, Chan is arrested for being a counter-revolutionary.

The Chinese Consul slyly entraps him, though, but his American lawyer leaks to the press that the Consul has kidnapped Li to take him back to China. The incident becomes a battle between freedom and communism.

MAO’S LAST DANCER is an extremely beautiful movie. For those who love art, it is extremely artistic. The ballet sequences are terrific. Better yet, it is a powerful, well-told story with great turning points.

Even better, it exposes the evils of Communism, international socialism and the good of republican democracy and capitalism. It shows the foolishness of the fellow travelers and useful idiots who oppose anti-communist principles and favor socialist and semi-socialist social engineering, and in all this, it historically rebukes with this true story what is happening in the United States today. This is a great story!

That said, some of the ballet dancing features upper male nudity and very skimpy costumes. Some of it has some suggestive dance moves, and Li gets passionate with the American women he marries, Liz, who stops him to tell him she’s a virgin. There’s also a smattering of very minor, light foul language and one joke about passing gas.

Otherwise, however, this is a must-see movie that’s incredibly dramatic and powerful. Highly recommended!