RISE OF THE PLANET OF THE APE 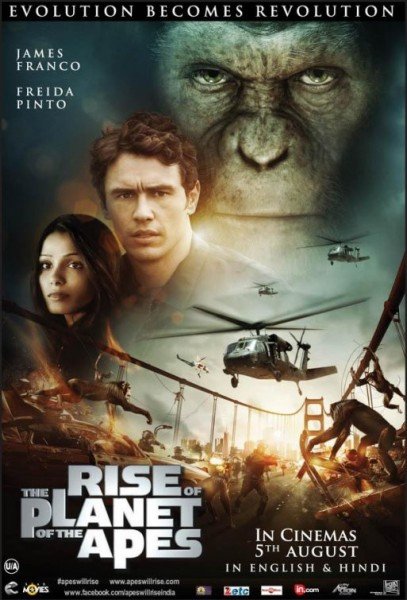 RISE OF THE PLANET OF THE APES is a reboot of the famous franchise about intelligent monkeys. In this one, a scientist named Will looking for a cure to Alzheimer’s Disease stumbles upon a virus that also improves the intelligence of the experimental chimpanzees. When the main female chimp goes berserk, Will secretly takes home her male baby when she has to be put to sleep. Will finds Caesar, the baby chimp, to have the same enhanced intelligence as his mother, so he keeps Caesar. A misunderstanding with a mean neighbor eventually forces Will to place Caesar in a small local zoo. Unknown to Will, Caesar is abused by the zoo owner’s mean son. Caesar manages to escape one night, finds Will’s new, even more powerful virus and decides to lead the apes at the zoo in a revolt back to nature.

RISE OF THE PLANET OF THE APES is brilliantly directed and acted. It also promotes compassion, mercy and freedom. However, these positive elements are undercut by some Romantic, humanist ideas. The movie also has intense violent scenes, scary creatures and some foul language. Caution is advised, especially for pre-adolescents.

(H, E, RoRo, B, Pa, Acap, LL, VV, S, N, M) Light humanist, environmentalist worldview posits animals (specifically apes) can obtain equal sentient status or souls to humans simply by biological means, mixed with some strong Romantic notions of “the noble savage” that extol emotional ties between humans and animals and Romantic ideas about zoos and other similar human institutions, some moral elements promoting compassion, mercy and freedom (including some rebukes against revenge), but also a pagan instance of revenge that seems validated, plus an anti-capitalist element where a medical company leader puts profits above ethics; 10 mostly light obscenities (mostly “h” words, a couple “s” words, one “d” word), three strong profanities (two GDs and one using Jesus) and four or five light exclamatory profanities (such as OMG); strong violence of one kind or another, often with scary creatures, includes female ape goes berserk because she thinks scientific researchers are going to hurt her unborn baby, chimp with scientifically engineered intellect attacks mean man who gets angry with the elderly father of the chimp’s handler, chimps fight among one another, mean zoo keeper shocks and tranquilizes chimps, mean zoo keeper uses hose on chimp for spite, mean zookeeper electrocuted, chimp uses aerosol of brain-enhancing virus to help himself and other apes gain intelligence and escape zoo, apes go on rampage in San Francisco includes property damage and taking weapons away from police, apes win battle against police trying to kill them, leader of escaped apes stops fellow apes from killing or really maiming police in revenge, an ape is shot while stopping an officer in a helicopter from shooting ape leader, and another ape gets revenge on a human villain (which movie seems to endorse); no sex scenes but couple shown sleeping in bed together but movie never shows whether they are married or not; upper male nudity; no alcohol use; no smoking; and, lying, revenge is rebuked in some scenes but not rebuked in another scene, abuse of animals but rebuked, human gets terminally ill and coughs up blood droplets from virus meant to cure Alzheimer’s Disease, and scientist secretly steals an earlier strain of the virus meant to cure Alzheimer’s to help his father.

The apes and primates look perfectly real – and very, very angry – in 20th Century Fox’s new prequel RISE OF THE PLANET OF THE APES. A reboot of the whole PLANET OF THE APES scenario that started in 1968, the new movie is much, much better than Tim Burton’s boring remake of the 1968 Charlton Heston and Rod Serling classic, PLANET OF THE APES. Like that classic movie, RISE OF THE PLANET OF THE APES still has some humanist conceits – specifically, that animals can attain souls like that of human beings, who are “made in God’s image” (Genesis 1:27) – but it has no humanist references to evolution or humanist attacks on religion. However, it does encourage viewers to cheer for the apes escaping their human handlers and obtaining their freedom.

The movie opens with Will, a scientist in San Francisco, testing a special virus on a female chimpanzee. Will hopes the virus will be a cure for Alzheimer’s Disease, including his elderly father’s sickness. Will’s tests on the female chimp are going very well. In fact, the virus also seems to be enhancing the female’s own intelligence.

So, Will decides to give a presentation to some rich potential investors. The presentation is interrupted, however, when the female chimp, Bright Eyes, gets extremely upset, escapes and causes havoc. Will’s boss orders Bright Eyes be put to sleep, along with all the other apes in the experiment. Soon afterwards, however, Will discovers that the female chimp was upset because she thought Will’s assistant was trying to hurt her unborn baby. The assistant manages to secretly deliver the baby before the mother is killed. He convinces Will to take the baby male chimp home until the assistant can find a good ape sanctuary for it. Will names the baby chimp Caesar.

Of course, the virus given to his mother has also amplified Caesar’s own intelligence. Consequently, Will finds that raising Caesar is such a joy that he keeps Caesar in his house. He also steals some vials of the old virus and gets rid of his father’s Alzheimers with them. Meanwhile, Will starts a relationship with a vet from the San Francisco zoo.

Everyone is happy for five years until the effects of the virus begin wearing off on Will’s father, whose immune system finally fights back. Caesar’s own system seems to be unaffected by this side effect.

Then, Will’s delusional father tries to drive the neighbor’s fancy car. The neighbor is a mean, angry man. He starts berating Will’s father and stabbing his finger into the father’s chest. This upsets Caesar as he watches from the attic window. Caesar runs out, knocks down the neighbor and starts punching him.

The authorities take Caesar away and put him in a small local ape sanctuary. Will promises Caesar, who’s been taught sign language, to get him out soon. When Will leaves, however, the zoo owner sticks Caesar in a dank dark cage, where the owner’s son starts psychologically abusing Caesar.

Will’s boss finds out about Caesar being taken from Will, and Will confesses about giving the virus to his father. When hearing of the success on Will’s father, the boss encourages Will to develop a new, more powerful strain of the virus. Naturally, Will brings home aerosol vials of the new strain to help his beloved father, but, in a touching short sequence, his father refuses to take it and dies.

Eventually, Caesar gets fed up with the abuse he suffers from the zoo owner’s son. He manages to escape one night, returns to Will’s house and learns about the new virus. He finds the vials Will had brought home, takes a whiff and returns with them to the small zoo. This sets the stage for the final Rise of the Apes, with an exciting standoff between the apes and the police.

RISE OF THE PLANET OF THE APES is brilliantly directed and acted. James Franco plays Will, John Lithgow plays Will’s father and Andy Serkis (Gollum in LORD OF THE RINGS) gives another magnificent motion capture performance as Caesar. So, this movie should definitely pack some theaters here and overseas.

There are solid positive elements in RISE OF THE PLANET OF THE APES. Will, the main scientist in the movie, is a very kind and compassionate man. Although the abuse he suffers makes him very angry, Caesar stops his fellow apes from taking their anger out on the police who want to kill him.

That said, one of the apes abused by Will’s boss during the new experiments eventually takes revenge on him. Also, the movie has some strong foul language, scary intense violence and Romantic notions about the “noble savage” who can be redeemed by human means.

Finally, RISE OF THE PLANET OF THE APES has a humanist worldview that posits the naturalistic, environmentalist canard that apes, the highest mammals on land (not counting humans), can gain a real human-like soul simply by biological means. This humanist belief, of course, contradicts Genesis 1:27 and 2:7, which says that God has only made man “in the image of God” and given man “the spirit (or breath) of life.”

However, the movie’s humanist worldview is not strong or overtly anti-religious, unlike the first PLANET OF THE APES movie. Also unlike the first movie, MOVIEGUIDE® heard or saw no positive references to evolution. In addition, the movie promotes compassion, mercy and freedom. All in all, therefore, the very entertaining RISE OF THE PLANET OF THE APES deserves a caution for pre-adolescents because of its intense moments, scary and realistic-looking creatures, and foul language. Please consult the CONTENT section above for other details about this movie before you decide to see it or let your children or teenagers see it.

Watch RISE OF THE PLANET OF THE APE: