"Not as Family Friendly as It Could Be" 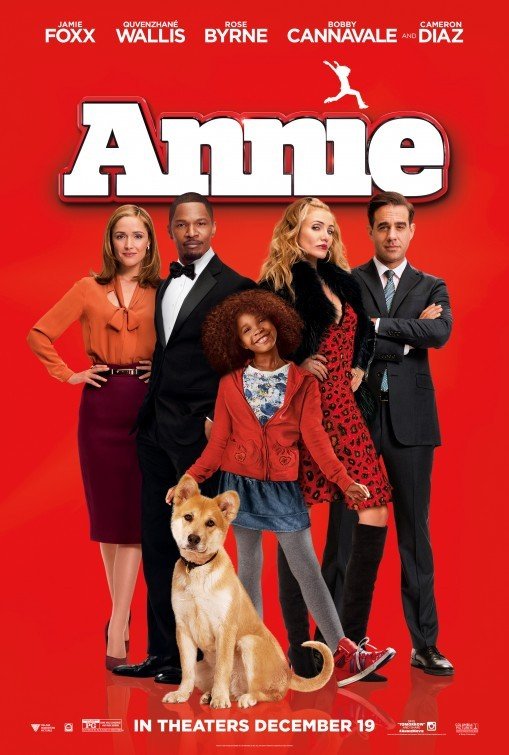 A remake of the 1982 movie, ANNIE is about 10-year-old orphan Annie Bennet, who lives in New York City with four other foster girls and their mean foster parent, Miss Hannigan. Ever an optimist and always cheerfully nice, Annie is constantly on the lookout for her parents, because she has a note and a locket they left with her when she was abandoned. When billionaire politician William Stacks saves Annie from an oncoming car, his political advisors turn this into an opportunity to help Stacks win the race for Mayor. As Annie and Stacks spend time together for good press, they begin to bond.

ANNIE has its heartwarming moments, but some of the acting falls flat even though the music is fun, and there are some hilarious moments. ANNIE has some refreshingly positive themes promoting family, sacrifice and hard work, plus a few positive references to God. Also, Annie shows kindness, even to people who are mean to her. That said, there is some light foul language and a couple lewd innuendoes scattered throughout ANNIE, so caution is advised for these elements.

(BB, C, Ro, PCPC, Cap, LL, S, AA, M) A strong moral worldview promoting family, sacrifice, hard work and kindness, with a few positive references to God and prayer, orphan says she prayed for a family but nothing happened, but by the end, in one way, her prayer was answered, but some of the songs follow a romantic worldview, and main character is a hard working capitalist, but there are some politically correct statements against big business that could be taken a few different ways and the political aspects seem to be more in line with the socialist president Franklin D. Roosevelt, about whom Annie does a presentation; seven light profanities (OMG’s) and seven light obscenities; the bad guy is punched, a not so intense car chase takes place, man saves little girl from oncoming traffic, but no violence otherwise; a woman is always making advances at men and flirts with them, some sexual innuendos, a light kiss at the end; no nudity but woman’s dress shows some cleavage; moderate to heavy drinking with some drunkenness; no smoking or drug use; and, some lying that isn’t discouraged.

Remake of the 1982 movie and the famous Broadway musical, ANNIE is about 10-year-old orphan Annie Bennet, who lives in New York City with four other foster girls and their mean foster parent, Miss Hannigan. An ever optimist and always cheerfully nice, Annie is constantly on the lookout for her parents, because she has a note and a locket that they left with her when she was abandoned.

William Stacks (Jamie Foxx) is a billionaire businessman who’s in a heated race for Mayor. Though raised poor in Queens, Stacks worked hard and built a cell phone empire. Though he mostly just wants to grow his company, Stacks does care about the people of New York. Stacks is aided by his faithful assistant Grace and his shady political advisor, Guy.

One day, Annie runs into Stacks on the street, and he saves her from an oncoming truck. Someone records his heroics, and the video goes viral. Taking advantage of this opportunity, Guy advises Stacks to befriend Annie and get close to her. The media eats this up, and the people adore the delightful Annie, which boosts Stacks’ political ratings.

Stacks becomes Annie’s temporary guardian. At first, he’s unattached, afraid to let anyone into his life, but it doesn’t take long for Annie to soften his heart, and he starts to care for her. However, Guy and Miss Hannigan hatch a plan to find Annie’s parents, or even find people who will pretend to be her parents to ensure Stacks will win the mayoral race.

Will Stacks be able to earn Annie’s trust? Is he willing to sacrifice everything he’s built to love and be loved?

ANNIE has its heartwarming moments. Quvenzhane Wallis (who became a well known name from her Academy Award Nominated role in BEASTS OF THE SOUTHERN WILD) has the charm, but not necessarily the charisma, needed to pull off the role. Jamie Foxx nicely fits as Stacks, and Rose Byrne brings in some motherly love as Grace. The musical numbers have a good modern twist, but Director Will Gluck fails to give the movie real jeopardy. There are other smaller flaws, like the viral street video of Stacks saving Annie is impossibly shown from multiple angles with some bad lip-syncing at the beginning.

There are some refreshing positive messages in ANNIE. For instance, Stacks is willing to give up everything to be with Annie. Through hard work, Stacks shows that you can accomplish anything, but Annie teaches him that you can’t push those who love and care about you away. Additionally, Annie is kind and generous to everyone, and even Miss Hannigan eventually gives in to Annie’s contagious love. There are, however, a few politically correct statements that could be taken a few different ways.

Overall, ANNIE has many fun moments, and even a few hilarious ones amid its faults. That said, there a several light profanities and obscenities uncharacteristically scattered throughout the movie and some sexual innuendos which most children won’t likely get, but a caution is still advised for these elements.