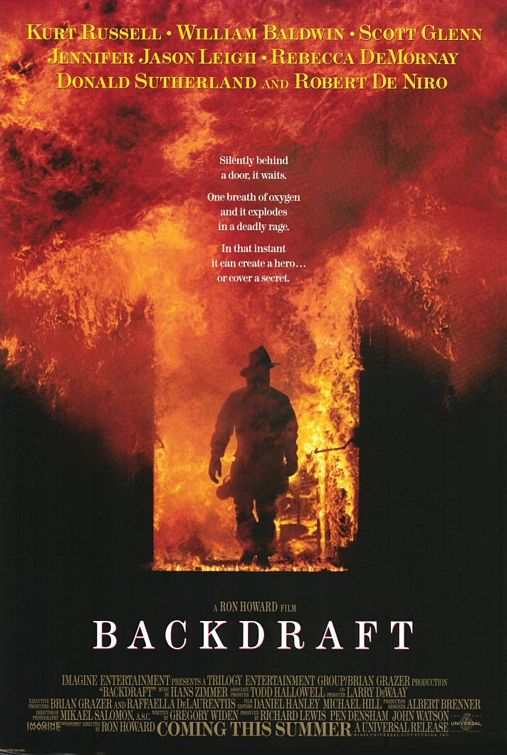 In BACKDRAFT, the realism and perils of fire-fighting create a suspenseful backdrop for a story about one family's ongoing legacy of heroism and sacrifice. It could have been an enjoyable film, but regrettably, because of the obscenities and unnecessary fornication scene (in the firehouse, of all places!), the film turns out to be less than mediocre.

The film BACKDRAFT, about the perils of fire-fighting, sets the screen ablaze with a vivid and spectacular display of pyrotechnics. Overall, the special effects in this film are great, but the language is so foul, with the Lord’s Name taken in vain repeatedly, that it negates much of the film’s enjoyment.

The realism of BACKDRAFT, a story about one family’s ongoing legacy of heroism and sacrifice, portrays fire-fighters in a positive light as they do battle not only with fire, but also with a determined arsonist.

As the film opens, brothers Steven and Bryan go through exhausting fire-fighting drills. Steven is a veteran fireman with the Chicago Fire Department and his brother is his “Probie,” an apprentice fireman on probation. Their father was also a fireman who perished in a fire some years earlier.

Going to one fire after another in fairly rapid succession, the brothers’ love-hate relationship becomes apparent, with Bryan often showing considerable resentment toward Steven. However, they pull together when they’re fighting fires.

Many of the fires prove to be an arsonist’s work who has cleverly made use of carbon tetrachloride, a chemical with significant propensities: it is non-flammable, but extremely volatile at high temperatures when it also forms a poisonous gas. Hence, when fire-fighters open a door in a burning building, they create a backdraft that lashes out at them and generally, they wind up horribly burned, maimed and even dead.

When Bryan talks with convicted arsonist Ronald, he begins to uncover some of the arsonist’s secrets. Speaking of fire as an animal, Ronald tells him: “Study the animal. See how it eats, breathes. Get to know the animal.” Bryan also learns about carbon tetrachloride from him.

Before long, Bryan discovers falsified records in the fire commissioner’s office, and also that one of the firemen, known as “Axe,” has been setting the fires. The most heroic and breath-taking scenes in the film come during a fire as Steven hangs onto Axe with one hand, unwilling to let him fall to his death despite his knowledge that Axe is the arsonist.

BACKDRAFT could have been an enjoyable film, but regrettably, because of the obscenities and unnecessary fornication scene (in the firehouse, of all places!), the film turns out to be less than mediocre. Thus, in spite of the film’s heroics, the characters’ “untamed tongues” (James 3:8) repeatedly get them in trouble and undermine the premise of heroic forgiveness.