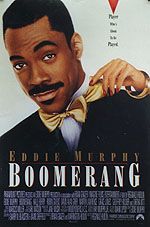 After the roles are reversed, Marcus Graham (Eddie Murphy) reconsiders his "love`em and leave`em" philosophy and settles down to a monogamous relationship in BOOMERANG. The film's preoccupation with fornication overshadows its case for one man-one woman relationship. As Eddie Murphy's comeback attempt, BOOMERANG does not give him the story to establish a compelling identity. Also, the language is filled with sexual colloquialisms and puns, reenforcing racial stereotypes of the basest kind.

After the roles are reversed, Marcus Graham (Eddie Murphy) reconsiders his Casanova philosophy and settles down to a monogamous relationship in BOOMERANG. However, BOOMERANG’s preoccupation with fornication overshadows its case for monogamy. The story begins at a New York cosmetics firm where Marcus works as a marketing executive. When his firm merges with LADY ELOISE, Marcus fornicates with the elderly founder so he can move up the corporate ranks. At work, he discovers his real boss is Jacqueline Broyer. Jacqueline is too smart for Marcus’s con games. When they end up in bed together on a New Orleans business trip, the roles are reversed, and he falls in love while she loses interest.

BOOMERANG romanticizes an oversexed journey filled with explicit fornication, nudity sexual innuendo. As Eddie Murphy’s comeback attempt, BOOMERANG does not give him the story to establish a compelling identity. Furthermore, the scatological humor wears thin, while the language is filled with sexual colloquialisms, reenforcing racial stereotypes of the basest kind. In all, BOOMERANG fails as a movie, but may capture an audience in a summer devoid of comedies.