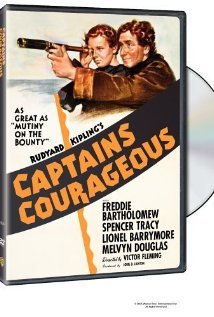 CAPTAINS COURAGEOUS is the classic 1937 movie based on Rudyard Kipling’s famous book. It tells the story of Harvey Cheyne, a spoiled 10-year-old used to getting his own way. When he tries to bribe a teacher, he’s suspended from school. The head of the school tells Harvey’s father, a captain of industry, he needs to spend time with his son. Mr. Cheyne takes Harvey on his ocean liner to England, but Harvey falls overboard after getting sick showing off to another boy. Manuel, a Portuguese fisherman on a fishing schooner played by Oscar-winner Spencer Tracy, rescues Harvey from the sea. The schooner’s captain hires Harvey to work the fishing season, but Harvey may be too spoiled and self-centered to learn anything.

CAPTAINS COURAGEOUS is a masterpiece that will touch the deepest emotions of everyone who sees it. It’s also a tremendous witness to the reality of Heaven and the love of our Savior, Jesus Christ, the greatest fisherman of them all! All children should see CAPTAIN COURAGEOUS to help then understand that life begins when you start loving others more than yourself.

(CCC, BBB, V, A, D, M) Very strong Christian, moral worldview with discussion that Jesus is the greatest fisherman, the reality of heaven, the importance of fishing for men, the certainty of Heaven, very honest prayer, with many strong moral points refuting stealing, cheating, disobedience, greed, gluttony, bribery, and more; no foul language; action violence but nothing gory or really intense such as boy gets slugged by classmate, ship captain cuffs boy on ear, boy falls overboard but is rescued, boy gets shaken upside down, boy and man get hooks in their arm that have to be painfully removed, and man gets tangled in rigging on sailboat when the mast breaks, and so he dies; no sex but sailor talks about getting girls when he goes ashore, but says he’s just kidding; no nudity; brief alcohol use; pipe smoking; and, bribery, lying, stealing but rebuked.

Based on a story by Rudyard Kipling, updated to the 1930s, the 1937 classic CAPTAINS COURAGEOUS is a strong morality tale with even stronger faith content that keeps you on the edge of your seat from beginning to end.

Harvey Cheyne is a spoiled 10-year-old who’s used to getting his way by throwing money at whatever problem he faces. When he tries to bribe a teacher, he’s suspended from school, and the head of the school tells his father, a captain of industry, that the father needs to spend time with his son. Harvey’s mother died when he was young, and his father has been too busy with business to pay too much attention to him.

Mr. Cheyne takes Harvey on his ocean liner to England. Showing off, Harvey drinks too many milkshakes, gets sick and falls overboard. A Portuguese fisherman, Manuel, rescues Harvey from the sea. Manuel takes Harvey on the fishing schooner We’re Here. Captain Disco hires Harvey to clean up to squelch the rumors that he’s just another Jonah bringing bad luck. At first, Harvey is spoiled, obnoxious and egocentric, but soon he becomes part of the crew.

Manuel teaches him how to fish, tells him about the greatest fisherman, Jesus, and helps him understand the Good News, that there’s more to life than this mortal coil. When the fishing schooner loses its mast and Manuel, the question is, Will Harvey grow up, will they make it to shore, will faith and values triumph?

CAPTAIN’S COURAGEOUS is an exciting story. It has an interesting structure because Harvey, played wonderfully by Freddie Bartholomew is the antagonist while Manuel, played by Spencer Tracy in an Oscar winning performance, is the protagonist. Although audiences like to think the main character is the hero, that’s not necessarily the case. This movie, like DOLL’S HOUSE and many others, gives a great lesson in great scriptwriting.

CAPTAINS COURAGEOUS is a masterpiece that will touch the deepest emotions of everyone who sees it. It’s also a tremendous witness to the reality of Heaven and the love of our Savior, Jesus Christ. Every child should see it to help him or her understand that life begins when you start loving others more than yourself.