"Faith Without Action Is Dead" 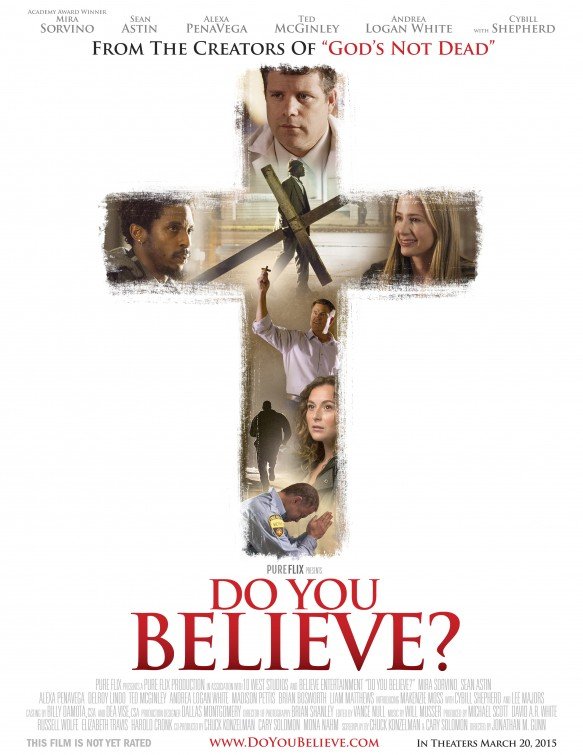 DO YOU BELIEVE? is a powerful movie from the studio that brought you GOD’S NOT DEAD. It follows 12 people through their individual struggles with faith, trial, pain, and loss. It begins with one man on the street who asks a pastor whether he believes in Jesus Christ, and, if so, what’s he going to do about it? This spurs the pastor to rethink what it means to carry the Cross of Christ. He starts a ripple effect leading 12 souls on a path that powerfully connects their lives together.

DO YOU BELIEVE? is a beautiful, exceptionally well-done Christian movie. It delivers strong characters with compelling and moving dramatic arcs. The movie challenges Christians to live out their Christianity through kindness, service and sacrifice. It also challenges them to boldly share their faith, no matter the consequences. Furthermore, to those that are struggling and have lost all hope and faith, God’s love for them is made abundantly clear. DO YOU BELIEVE? doesn’t shy away from difficult subjects. Though it’s never gratuitous, some of the mature elements may warrant caution for young children.

(CCC, BBB, V, A, M) Very strong Christian, biblical worldview that challenges believers to boldly carry the cross and to live out their faith in love, forgiveness, kindness, service, and sacrifice, the Gospel is boldly presented and lives are redeemed; no foul language, girl says “heck”; light violence includes a van crashes into a house, gun shots are heard and seen, a man’s legs are crushed by a barrel, and he dies, a man has a nightmare and attacks his sister, a sick man coughs blood, a man is shot three times in the back, an intense car crash pushes a car off a bridge and causes another vehicle to explode in an intense scene; no sexual content, with light kissing between married couples; no nudity; light wine drinking; no drug use; teenage pregnancy and robbery, but not condoned.

DO YOU BELIEVE? is an incredibly powerful movie from the studio that brought you GOD’S NOT DEAD. It follows 12 different people through their individual struggles with faith, trial, pain, and loss and how the power of the Cross will make each of these lives intersect.

It all begins when a homeless man carrying a large cross confronts a pastor, Matthew, driving at night. The man asks Matthew if he believes in Christ, and, if so, what’s he going to do about it?

These words shake up Matthew. The next morning, he delivers a sermon about faith in action and gives everyone in his congregation wooden crosses. Living out his own words, Matthew reaches out to a teenage girl on the street who’s pregnant and homeless.

Elsewhere, a sick man recently released from prison helps a homeless single mother and her daughter by giving them a place to stay. An elderly couple still heartbroken over their daughter’s death tries to find renewed purpose through service. A paramedic faces legal trouble for sharing his faith to a dying man. A criminal finds Jesus, but his criminal buddies won’t let him off the hook. Meanwhile, two broken strangers contemplating suicide cross paths.

As all of these souls and more struggle through life, God’s masterpiece is being painted, and they all intersect in an unexpected way.

DO YOU BELIEVE? is a beautiful, powerful and exceptionally well-done Christian movie. A major step up from GOD’S NOT DEAD, the writing and direction of DO YOU BELIEVE? deliver strong characters with compelling, moving dramatic arcs. At times, the jumping between characters may feel taxing, but it leads to a satisfying, exciting finale. Nearly all the actors give strong, grounded performances. The story moves briskly and never bores the viewer.

Best of all is the strong redemptive Christian message promoting the Gospel of Jesus Christ in DO YOU BELIEVE? The movie challenges Christians to live out their Christianity through kindness, service and sacrifice. It also challenges them to boldly share their faith, no matter the consequences. To those who are struggling and have lost all hope and faith, God’s love for them is made abundantly clear. No matter how broken or how lost, God’s love is fully on display in this movie.

DO YOU BELIEVE? doesn’t shy away from difficult subjects. A teenage girl is pregnant, two people almost commit suicide, a robbery takes place, and a man is murdered. Nothing is gratuitous in the movie, but some of the intense sequences may be too much for young children, so caution is advised.

In conclusion, DO YOU BELIEVE? is an important, timely movie for both Christians and Non-Christians.

Rent or Buy DO YOU BELIEVE?: