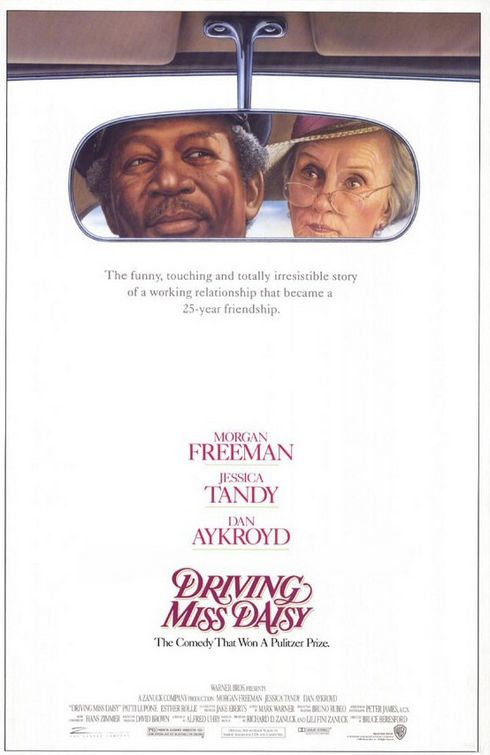 DRIVING MISS DAISY is a great character study with strong Christian values about a wealthy Jewish matron befriended by her black chauffeur, a committed Christian full of wisdom. When Miss Daisy Werthan has an accident driving her car, her dedicated son hires a chauffeur against her will. Stalwart and patient, Hoke Colburn is a strong, intelligent, black Christian who turns the other cheek and refuses to compromise his values. The two older people clash at first but eventually become friends, especially because Hoke applies biblical wisdom to everything he does.

DRIVING MISS DAISY is finely crafted, with an attention to details that convincingly span 20 years. The performances by Morgan Freeman and Jessica Tandy are superb. The movie is almost flawless and has become a classic. Moreover, it has a strong Christian worldview with hardly any objectionable content. Against her will, Miss Daisy warms to Hoke because he lives Christian virtues of justice, mercy, and humility. “You are my best friend,” she admits to him at the end. Their friendship ultimately transcends their differences. As in the Gospel story, love triumphs over alienation.

(CCC, BBB, L, V) Very strong Christian, moral worldview; two exclamatory curses; elderly woman backs car into a ditch; no sex; no nudity; no alcohol; no smoking or drugs; and, nothing else objectionable.

DRIVING MISS DAISY is a great character study that will not only fill you with joy and love, but also encourage you to follow Jesus Christ more closely. In a subtle way, this movie asks and answers some of the most important questions of our age.

Miss Daisy Werthan is a highly-independent Southern Jewish matron who has known poverty and prejudice: facts she isn’t going to let anyone forget, although now she’s rich, and her son is now accepted by Atlanta society. The tough, yet loving old woman insists upon doing everything herself, until she backs her new car into a gully.

To protect her from future accidents, her dedicated son, Boolie, hires a chauffeur against her will. Stalwart and very patient, Hoke Colburn is a strong, intelligent, black Christian who turns the other cheek and refuses to compromise his values. For one week, Miss Daisy is imprisoned in her house because she refuses to allow Hoke to drive her to the Piggly-Wiggly market in her brand new 1948 Hudson. Finally, she tries walking to the store, and Hoke drives slowly beside her. Eventually, she climbs into the car, but doesn’t want anyone to see her and conclude that she’s “putting on airs,” as she says.

Miss Daisy is pretty hard on Hoke, but he parries every blow with wisdom. When she attends her daughter-in-law’s Christmas party, she tells Hoke that he will be the only Christian there. Of course, he has to wait outside with the car.

When Miss Daisy goes to a benefit for Martin Luther King Jr., she disdains Hoke’s company in spite of the suggestion by Boolie that she take Hoke to the dinner. With the air of a liberal supporting a good clause, she tells her patient chauffeur that “times have changed,” as he drops her off at the door. Hoke replies with grace, “Times ain’t changed that much.”

However, despite the wide gaps that separate them, Daisy and Hoke ultimately become a beguiling “odd couple.” Against her will, Miss Daisy warms to Hoke because Hoke lives the Christian virtues of justice, mercy, and humility. “You are my best friend,” she admits to Hoke at the end of the film, and their friendship ultimately transcends their differences and similarities. As in the Gospel story itself, love triumphs over alienation.

What a joy to see a movie where the hero is a believing Christian, the heroine is a believing Jew, and the audience walks away smiling and greeting one another. This film will make you feel good. Scene after scene will find a place in the pages of your memory to comfort and encourage as the years pass. DRIVING MISS DAISY will bring tears to your eyes as well as humor to your heart.

This movie dares to tackle the difficult problem of racism with great wisdom and sensitivity and solves it the only way it can be solved through Christian love and reconciliation, instead of aggravating the problem through propagandistic calls for humanist rebellion and revenge. At a time when most Hollywood movies have put forth Barabbas as the solution to the problem of prejudice, it is a joy to find a movie which promotes the Way of forgiveness and reconciliation.

A story of persistence against all odds, the picture is based on a popular Pulitzer Prize-winning play. It is marred by only two curses, which were not in the play, but probably inserted to warrant the PG rating. On the other hand, there is a powerful rendition of the hymn, “What a Friend We Have in Jesus” at a funeral, and Hoke’s prayers and faith in Christ are treated with great respect.

DRIVING MISS DAISY is finely crafted with an attention to details that convincingly span 20 years. The performances are superb, especially Morgan Freeman as Hoke, who deserves the Academy Award for Best Actor. The movie is almost flawless and will become a classic in the tradition of CHARIOTS OF FIRE, TRIP TO BOUNTIFUL, and TO KILL A MOCKINGBIRD.