"Your Sins Will Find You Out" 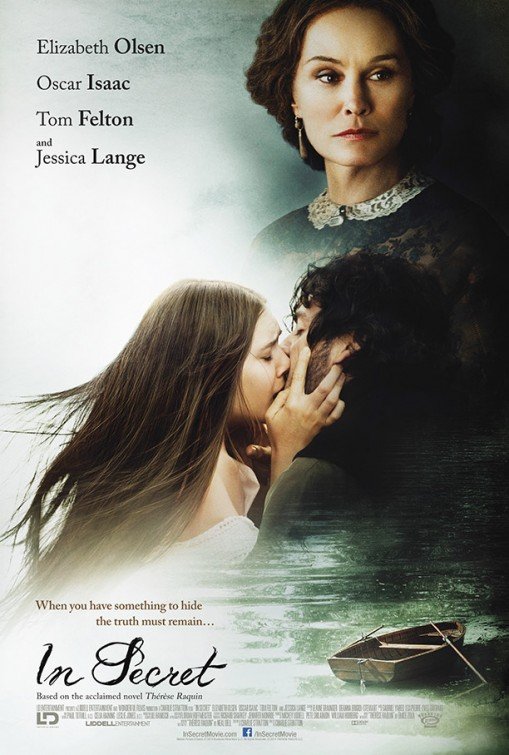 IN SECRET is based on both the novel THERESE RAQUIN by Emile Zola and the play of THE same name by Neal Bell. This cautionary tale from 19th Century France, chronicles the misfortune and downfall of Therese. Abandoned by her father to her aunt, she’s treated more as servant than a beloved niece. When she finds herself trapped in a loveless marriage, she pursues an illicit affair that proves deadly.

IN SECRET is a morality tale of “your sins will find you out,” set against the backdrop of a devoutly Christian household and culture. Toward the end, the movie becomes weighed down to become a melodramatic caricature of itself. However, it has strong production values and is adequately adapted for screen with some strong performances. Jessica Lange is particularly good as the aunt who dotes on her sick son at the expense of her niece. While not depicted in a really graphic nature, the illicit nature of much of the story makes IN SECRET a vivid portrayal of the utter destruction of sin. So, extreme caution is advised for IN SECRET.

(B, CC, L, V, SS, NN, A, D, MM) Light moral worldview in a morality tale with overt Christian content such as praying the rosary, quoting scripture, and attending church; two light profanities; light violence includes murder by drowning and man roughly pushes a woman around a room and out a door; depicted adultery; side of woman’s breast seen and upper male nudity; alcohol use; drinking Absinthe; and, stealing money, lying, deceit.

IN SECRET is based on both the novel THERESE RAQUIN by Emile Zola, and the play of THE same name by Neal Bell. Set in 19th century France, it’s a morality tale chronicling the misfortune and, worse, the broken choices of Therese.

On her mother’s death, her father leaves the young daughter in the French countryside to take care of his sister, Madame Raquin, with promises of his return. Wonderfully portrayed by Jessica Lange, Mme. Raquin is herself a single mother of a sickly boy Therese’s age, named Camille. The two children’s worlds are now thrust together. They grow up sharing the same room, same bed. Treated more often as a servant than a niece, Therese endures her sickly cousin’s coughing and hacking every night, as well as the incessant demands of her aunt by day.

Emerging into her teenage years, Therese learns her father has been lost at sea. Whatever inheritance that might have been hers is absorbed by her aunt. Once again, she seems left without choices.

Her aunt is a highly devout woman who dotes on her son obsessively. For Mme. Raquin, Therese exists to serve as guardian angel for her sickly Camille, her pride and joy. At the same time, Therese is entering womanhood and becomes taken with a different kind of obsession. A farmer in the distance, shirtless, hoeing the soil, catches her eye, and she becomes aroused, longing for physical love anywhere she can find it, even imagined.

On news of her father’s death, Camille announces he’s gotten a job and is moving to Paris. By the end of the conversation, it’s been announced to Therese that she will marry Camille, and they (Mme. Raquin included) will move to Paris and open a fabric shop.

Therese seems resigned to her fate. She was isolated in the countryside. Now, she lives isolated in the middle of Paris, tending the demands of her aunt in running the shop that even Camille describes as “dark and mean.” Therese tries to make a go of it with Camille, who seems more taken with the idea of marriage than its actuality. With the aunt meddling in their affairs at every turn, the young marriage seems doomed from the start. Desperation mounts.

One day Camille returns from work, a family friend in tow, Laurent. Enter the handsome, ruggedly strong Laurent, counterpoint to the sickly, childish Camille. Laurent quickly steals the spotlight. Quite the artist, he paints Camille’s portrait all the while flirting with Therese, making sensual gestures toward her as he paints. He’s invited to join the weekly gathering of friends of Mme. Raquin, including a Police Inspector, for dominos and conversation. There, Laurent pursues Therese all the more.

The two become quickly embroiled in an illicit whirlwind affair. Therese loses herself in Laurent and casts off all restraint. All the telltale signs are there for the rest who remain oblivious as Therese begins failing in her duties and taking to “headaches” on a constant basis. The affair continues and intensifies for weeks. Therese pleads with Laurent to “save me!”

Laurent’s intent becomes clear. They decide to get rid of Camille, who is sickly. After all, “accidents do happen.” A plan is made. The two take Camille out for a long walk near a lake. Exhausted from a mere two-mile walk, Camille makes it to the lake where a boat is rented. Camille sits at the head; Laurent enters behind him, and then turns to assist Therese into the boat, but Therese is overcome with guilt at the thought of what they’re about to do. Wickedly, Laurent whispers to Therese, “I love you,” snapping her out of guilt and conviction and manipulating her back into his scheme. She consents, and Camille is drowned.

At first, Therese feigns heartbreak at the death of her husband, but over the next several months her charade transforms into remorse. Then, when Laurent discovers Camille’s money and the shop aren’t in Therese’s name, greed rears its ugly head. How afar will he go to grab the aunt’s wealth?

IN SECRET is a morality tale that emphasizes the lesson found in Numbers 32:23 of the Holy Bible, “Your sin will find you out.” As such, it’s set against the backdrop of a devoutly Christian household and culture. The story becomes weighed down toward the end, to become a melodramatic caricature of itself. However, the movie has strong production values and is adequately adapted for screen and directed by Charlie Stratton with some strong performances, Jessica Lange in particular. While generally not depicted directly on screen, the illicit nature of much of this story makes IN SECRET a vivid portrayal of the utter destruction of sin, but extreme caution is advised.