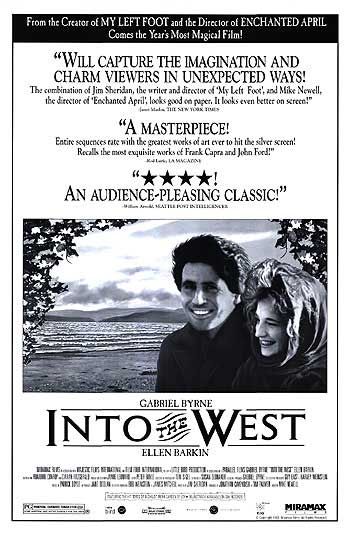 INTO THE WEST follows the exploits of two young Dublin brothers who ride into the Irish countryside on a mysterious white horse, pursued by police, their dad, and a posse of gypsies. Although the cinematography is breathtaking, and the direction and acting commendable, the movie has a misleading mythological premise that cannot be promoted since it may lead some children away from solid biblical precepts.

(NA, Ab, A/D, L, V) Story based on mythological Irish legend; New Age premise of white horse as mediator or "savior" to link children to "Land under the sea" where all is well & everyone is happy; man drinks alcohol in several scenes & is shown drunk; no obscenities, but 5 profanities, including 2 exclamatory ones; and, brief violence in few scenes involving horse & later, in boy drowning.

Set in Dublin, Ireland, INTO THE WEST finds a gypsy grandfather and his little grandson warming their hands over a bonfire when a mysterious white horse appears. The little boy claims the horse whom the grandfather calls Tir na nOg, meaning “Land under the sea.” Many adventures begin with Ossie, the little boy, his brother, Tito, and the horse, who has supernatural abilities and is all wise. They ride the horse to their 6th floor apartment in Dublin and get in trouble with the authorities. A businessman buys the horse, but the boys find him and escape on his back. Then, everything breaks loose as the police, helicopters and hounds chase after the boys. However, Tir na nOg is no ordinary horse. He is an all-knowing and all-wise horse and gallops away with the boys, hiding all of them in places no one would think to look. The film ends with a beach scene where the little boy drowns and comes back to life as Tir na nOg disappears into the sea.

Although the cinematography is breathtaking, and the direction and acting commendable, INTO THE WEST has a misleading mythological premise that cannot be promoted since it may lead some children away from solid biblical precepts and the Savior already provided for them in Jesus Christ. If it were not for the mythological ideas set forth in this film, it would be an enjoyable one.

Watch INTO THE WEST: