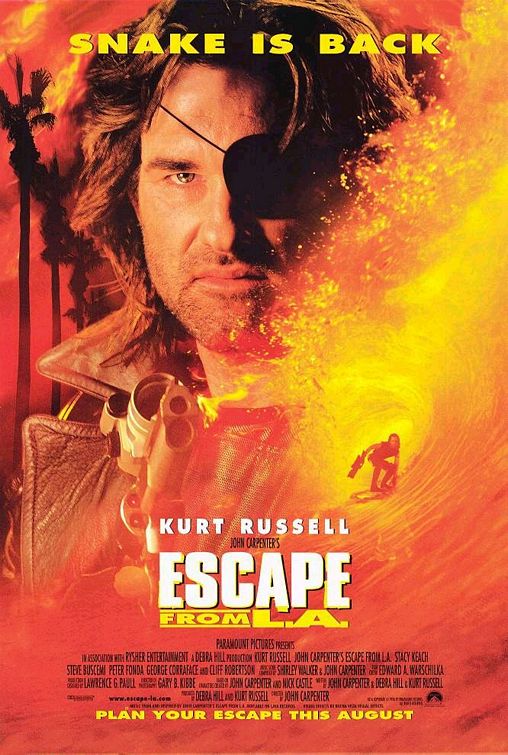 ESCAPE FROM LA is the sequel to the 15-year-old movie ESCAPE FROM NEW YORK. Kurt Russell stars as Snake, who attempts to rescue the president's daughter from a futuristic Los Angeles, which has been turned into a penal colony. Filled with violence, poor dialogue and a blasphemous central character, it has no redeeming qualities.

In ESCAPE FROM LA, Kurt Russell reprises the character of Snake Pliskin in a failed attempt to boost his career and make a quick buck. In 1998, a Christian politician predicts that Los Angeles will be separated from the rest of the United States. Sure enough, in 2000 a major earthquake causes Los Angeles to become separated from the North American continent. The Christian politician is elected president of the United States. He declares that the rubble that is left of Los Angeles is to become a penal colony and sends many Americans there. The rebellious first daughter delivers a device which controls world energy to the leader of the gangs on Los Angeles. The President and the leaders of his security force are desperate to get the box back, so they send Snake Pliskin to recover it.

ESCAPE FROM LA is a predictable, unlikely second-rate movie. This movie makes the mistake of trying to be funny. Every moral American, even action fans, will be disappointed. It demonstrates a very blasphemous central character, the supposed Christian President of the United States. Those moviegoers who saw ESCAPE FROM NEW YORK will probably be disappointed by this movie. It is a fine example of poor special effects and wanton violence with absolutely no redeeming value.