"Support Others in Distress" 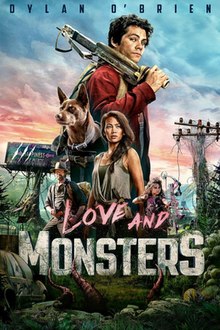 LOVE AND MONSTERS follows a young man named Joel living underground in a post-apocalyptic world filled with mutated monsters. Joel decides to see a former romantic flame, Aimee, living in another small, nearby underground camp. It’s been seven years since Joel has seen “the surface.” Joel’s companions of six other people aren’t confident he can survive his seven-day trek to see Aimee. Nonetheless, they give him some tips before he leaves. During his journey, Joel is taught some tips by two other people he meets who rescued him. They soon go their separate ways. Will Joel survive alone?

LOVE AND MONSTERS is funny and exciting. The pacing is great. LOVE AND MONSTERS has strong moral content promoting helping other people during times of danger. It also has elements of mentorship and generosity where characters teach one another how to survive. Sadly, the movie has a light Romantic worldview where love and reuniting with a loved one motivates the protagonist. LOVE AND MONSTERS also contains lots of foul language, a scene implying lovemaking and intense, scary action violence. So, MOVIEGUIDE® advises extreme caution.

(Ro, BB, Ho, FR, LLL, VV, S, N, AA, M):
Dominant Worldview and Other Worldview Content/Elements:
Light Romantic worldview where love and the idea of reuniting with a loved one motivates the protagonist, mitigated by strong moral elements, including helping one another during times of distress, generosity, an element of mentorship where characters teach one anther how to survive with the knowledge they’ve learned in their own respective journeys, one positive refence to God where a character thanks Him, plus one moment where a character says a hallucinating character accidentally kissed a man thinking he was a woman, and one line where someone says the false Hindu greeting, “Namaste”
Foul Language:
30 obscenities (mainly “s” words) and 18 light profanities (mainly OMG)
Violence:
Strong violence includes characters get eaten by mutated CGI alien monsters and try multiple forms of self-defense such as shooting them and stabbing them, man gets punched across the face and is knocked out as a result, and mutated slugs poison a young man with their sharp teeth
Sex:
Implied fornication
Nudity:
Upper male nudity in a few scenes, a woman appears in a towel, and a dating couple’s bare legs are shown intertwined implying they had sex
Alcohol Use:
Characters drink homemade beer, and some get tipsy:
Smoking and/or Drug Use and Abuse:
No smoking or drugs but a character hallucinates because he’s been poisoned by mutated slugs; and,
Miscellaneous Immorality:
Trickery and a mention of hatred.

LOVE AND MONSTERS follows a young man who ventures to see a former romantic flame in a post-apocalyptic world filled with mutated monsters. LOVE AND MONSTERS is funny and exciting, with strong moral elements of helping other people during times of danger, but the movie’s Romantic worldview has lots of foul language, a bedroom scene implying illicit behavior and intense action violence, so extreme caution is advised.

The story begins with narration from a young man who viewers learn is Joel Dawson. Joel says that seven years ago, an asteroid called Agatha 616 threatened Earth until multiple nations launched rockets at the asteroid, destroying it. However, the destruction created drastic consequences. The chemical compounds making up the rockets sprinkled back onto Earth and mutated all creatures into monsters. Now, roaches, slugs, frogs, and other creatures are gargantuan and carnivorous.

Joel has spent the last seven years underground with a colony of other survivors. The only things is, Joel’s colony has coupled off, and he’s the only single guy left. One day, Joel disobeys an order to help with an impending threat of a monster. The audience learns Joel gets scared easily and freezes in conflict, no traits that anyone fighting carnivorous monsters should have, to say the least!

Cut to seven years earlier. Joel and his high school girlfriend, Aimee, are snuggling and kissing in her car. Back to the present day. Joel regularly calls Aimee’s colony by radio o get in touch with her. He decides that enough is enough. He’s going to venture outdoors to see her, no matter what. Joel’s colony urges him against this endeavor, but ultimately advise him to run and hide should he encounter any threat while on “the surface.”

Joel’s colony’s advice soon comes to fruition when he encounters a man-eating frog. Thankfully, a dog named Boy comes to Joel’s rescue, and the duo team up on Joel’s romantic quest to see Aimee. Shortly after Boy and Joel start their next day, Joel falls into a hole laced with monsters that he can’t seem to kill. In another fortunate moment, a man named Clyde and a girl named Minnow appear on top of the hole with a rope and pull Joel to safety.

Like so many others in this narrative, Clyde and Minnow have their own baggage when it comes to monsters, but it’s clear they’re lightyears more equipped to handle “the surface” than Joel is. As a result, Joel learns a lot from Minnow and Clyde but decides to continue his own way while Minnow and Clyde continue on their path to the mountains.

Without anyone to help him out of sticky situations, will Joel be able to get to Aimee safely?

The title of LOVE AND MONSTERS is right on the nose. It’s truly a movie about both love and monsters. It has many comical moments and great pacing, which make the movie entertaining and engaging for viewers looking for an exciting science fiction story with lots of comedy. As such, the movie functions similarly to the ZOMBIELAND movies. Dylan O’Brien (TEEN WOLF) performs his role to the letter. He grabs the viewer’s sympathy within the movie’s first few moments.

LOVE AND MONSTERS has a light Romantic worldview where love and the idea of reuniting with a loved one motivates the protagonist. That said, there are strong moral elements of helping other people during times of distress. LOVE AND MONSTERS also has elements of generosity and mentorship where characters teach one another how to survive by imparting the knowledge they’ve gained in their respective journeys. Sadly, though, LOVE AND MONSTERS has lots of foul language, a scene implying lovemaking and intense action violence involving giant monsters. So, MOVIEGUIDE® advises extreme caution.