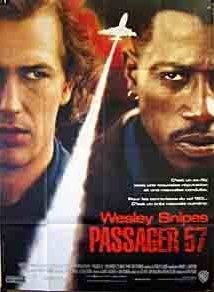 In PASSENGER 57, anti-terrorist expert John Cutter (Wesley Snipes) is en route to Los Angeles where he hopes to lead a more tranquil life. A well-known terrorist is also on the plane to L.A. where he will stand trial for airplane hijacking. The action starts when the terrorist gets free. Snipes turns in a credible performance, and the direction is commendable, but the film is marred by considerable profane and obscene language.

In PASSENGER 57, anti-terrorist expert John Cutter, alias Passenger 57 (Wesley Snipes), is en route to Los Angeles where he hopes to lead a more tranquil, nine-to-five kind of life. Another passenger and well-known psychotic terrorist, Charles Rane, just happens to be on the same plane headed for Los Angeles where he will stand trial for airplane hijacking. When the plane is 38,000 feet in the air, Rane manages to free himself, and with the help of accomplices, begins his plane takeover. Soon, Cutter gets forced into action, and following much violence, it appears that everyone on the plane will be killed and that Rane and his cohorts will go free.

Wesley Snipes turns in a credible acting performance with his fight tactics, clever maneuvers and split-second timing in the fight sequences, amid considerable profane and obscene language. Director Kevin Hooks also deserves credit for a fine directing job with action-packed suspense and timing propelling the movie rapidly forward. Regrettably, we see a blurring of good and evil in this film. How refreshing it would be to see good and evil clearly defined on the screen once again!