PERCY JACKSON AND THE OLYMPIANS: THE LIGHTNING THIEF

"Infighting Among the Gods" 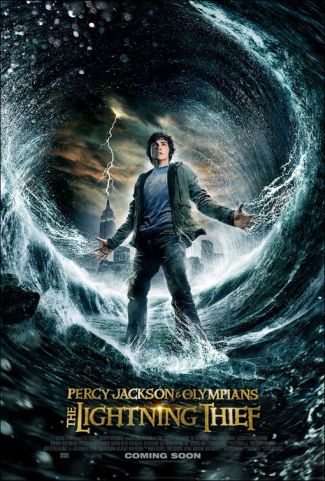 PERCY JACKSON & THE OLYMPIANS: THE LIGHTNING THIEF is a somewhat silly reinvention of Greek mythology in contemporary America. Percy discovers his real father is Poseidon, the Greek god. Meanwhile, Zeus has accused Percy of stealing his lightning bolt. If Percy doesn’t return it, there will be a war in Olympus, which will destroy the world. He goes to a camp for demigods, the children of gods and human beings. After brief training, Percy teams up with Grover and Annabeth, the daughter of Athena, to rescue his mother from the clutches of Hades and perhaps return the lightning bolt.

THE LIGHTNING THIEF is well paced, with compelling action. However, a few dramatic problems make it feel like a B movie. There are also some serious logical flaws and plot holes. The movie contains numerous sexual references about lust among the gods. There are also several items stolen without any remorse. The story has some commendable moral points, however. Percy is willing to give up his life for his mother. There are also acts of valor and a chaste relationship between Percy and Annabeth. The movie’s worldview, however, is not Christian and contains false theology.

(PaPaPa, FRFR, C, B, L, VV, S, N, A, DD, MM) Very strong pagan, polytheistic worldview with frequent discussions of hedonistic behavior and false theological concepts as well as some Christian, biblical moral virtues such as loyalty and sacrifice; four obscenities and one light profanity; lots of comic book action violence with some bloodshed and several scary monsters who are killed and beheaded, woman turned to stone and her wrist is cut off, hero has ability to heal scars and wounds, swordfights, and scary woman with mean snakes in her hair turns woman to stone and threatens others before her head is cut off; sexual innuendoes includes references to Persephone fooling around with others, a Satyr is seduced by groups of women and Persephone, and enticing women invite teenagers to eat psychedelic food in the shape of a Lotus flower; upper male nudity and female cleavage; brief alcohol use; no smoking but a psychedelic sequence where teenagers are given hallucinogenic food; and, disobedience, talking back, rudeness by a villain, auto theft, stealing pearls, breaking and entering.

PERCY JACKSON AND THE OLYMPIANS: THE LIGHTNING THIEF is neither a children’s movie nor an exciting fantasy. Instead, it is a somewhat silly reinvention of Greek mythology in contemporary America.

Percy is having trouble at school, loves his mother, Sally, and hates his crude, abusive stepfather, Gabe. Quickly, his adolescent confusion is intensified when he discovers his real father is Poseidon, the Greek god, and that his uncle Zeus has accused Percy of stealing Zeus’ lightning bolt. If Percy doesn’t return it by June 21, there will be war in Olympus, with Zeus, Poseidon, and their brother, Hades, fighting each other, and destroying the world. These are the same three brothers who chopped up their cannibalistic father Chronos so they can be the ruling gods.

Percy finds out his best friend Grover is a satyr, who’s been protecting him all these years. He’s directed by his teacher to go a camp for demigods, the children of gods and human beings. After brief training, Percy teams up with Grover and Annabeth, the daughter of Athena, to rescue his mother from the clutches of Hades and perhaps return the lightning bolt, which he did not steal.

PERCY JACKSON & THE OLYMPIANS has some commendable dramatic elements. It is a well-paced story. The action is emotional. And, the storyline delivers on its premise. There are also moments in the movie that are well executed. However, there are also dramatic problems that make the movie feel like a B movie. There are some serious logical flaws and plot holes. Plot problems are solved several times by Deus Ex Machina, which may have worked in Greek theater, but distract from the storyline. The setting in New York seems highly incredible, and some of the acting is foolish. And, the music does not fit the movie.

There are some very questionable moral elements in this movie. Grover is a satyr, with legs like a goat’s. His proclivity to sex and orgies is mentioned several times. There are also groups of women such as nymphs, the Lotus Eaters, and the daughters of Aphrodite who are on the prowl, not to mention Persephone who trolls for lovers although she’s married to Hades. Of course, the movie’s premise is that the gods come down and have illicit affairs with human beings. There are also several items stolen without any remorse, such as winged shoes, pearls, and a Maserati. And, there’s a psychedelic sequence in Las Vegas when Percy and his friends are waylaid by a cult running a fancy casino.

There are also some commendable moral points, however. Percy is willing to give up his life for his mother. His mother has sacrificed for him. Grover is willing to sacrifice his freedom for Percy and his mother. There are also some acts of valor and a chaste relationship between Percy and Annabeth. Unintentionally, the movie shows how stupid the Greek concept of gods was. These guys chop up their father, lie to each other, steal from each other, want to kill each other, and sleep with mortals. They are not a pleasant bunch.

Watching this movie, one can only think how blessed we are to have the Good News of Jesus Christ, fully God and fully Man, who sacrificed Himself to deliver us from this mythological nightmare. One of our reviewers grew up with such confused mythological theology and can testify to the joy of finding the truth that is Jesus Christ and being delivered from drugs, sex, immorality, and false theology.