"Your Not So Family Friendly Neighborhood Spiderman" 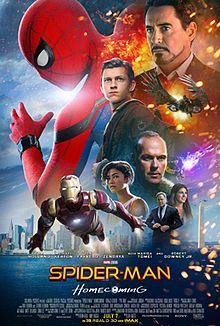 SPIDER-MAN: HOMECOMING follows a young Peter Parker, a high school freshman who lives with his Aunt May. With a brand-new Spider-Man suit gifted to him from Tony Stark after the events of the last CAPTAIN AMERICA movie, Peter is ordered by Stark to stay low and only focus on stopping smaller criminal activity. However, Peter gets in over his head as he attempts to catch a villain he calls the Vulture, who’s selling dangerous weapons made from alien technology. Can Peter discover what a real hero is and save the day?

SPIDER-MAN: HOMECOMING has a lot going for it. There’s great humor, a terrific Peter Parker portrayed by the talented Tom Holland, and the support of Marvel’s other great characters, like Tony Stark and Captain America. However, SPIDER-MAN: HOMECOMING is an emotionally tepid, lazily written and directed movie. While there are positive moral, redemptive messages of sacrifice and becoming someone of character, there’s too much foul language, lewd references and politically correct comments. Because of the negative elements, MOVIEGUIDE® advises extreme caution for younger teenagers and children for SPIDER-MAN: HOMECOMING.

(BB, CC, PaPa, ACap, Cap, PC, RH, LLL, VV, S, N, M)
Dominant Worldview and Other Worldview Content/Elements:
Strong moral, redemptive worldview with positive values of sacrifice, courage, listening to authority, becoming a person of character, and even loving one’s enemies with reference to a “miracle” and Tony Stark character says, “Thank God,” but mixed with some strong paganism, including a reference to Hinduism, and some rebellious and crass behavior condoned, plus light anti-capitalist elements where villain is an entrepreneur who’s just trying to “build” a business though this is mitigated by villain’s inconsistent bone to pick with tech mogul Tony Stark because he claims Tony is a one-percenter who doesn’t care about the “little guy,” but capitalist Stark is shown to be a good mentor and there's a politically correct statement from a female teenager who won’t celebrate the Washington Monument “because it was built by slaves,” a revisionist history remark reflecting a leftist view that's not true (most of the monument, 90% or more, was built after 1878, long after slavery was outlawed in the USA;
Foul Language:
22 obscenities (including three uses of “s” word plus one almost finished use of the “f” by Aunt May), nine light profanities (OMG), a middle finger, and bully calls Peter “Penis Parker” many times;
Violence:
Moderate action violence with fighting and jeopardy, Spider-Man gets pretty beat up but not bloodied, villains fight with dangerous alien weapons that slice through buildings, man is incinerated with one of the guns, characters almost fall down an elevator shaft, punching, etc.;
Sex:
No depicted or implied sex, but Tony Stark makes a statement about Aunt May “wearing something skimpy,” teenagers flirt, and character lies about what he was doing by saying he was watching porn (he was not);
Nudity:
Upper male nudity when Peter Parker strips down to his boxers when changing into his Spider-Man costume;
Alcohol Use:
Adult character offers a minor some alcohol;
Smoking and/or Drug Use and Abuse:
No smoking or drugs; and,
Miscellaneous Immorality:
Destruction of personal property isn’t addressed, rebelliousness, bullying but rebuked, lying.

SPIDER-MAN: HOMECOMING follows a young Peter Parker in his freshman year at high school. With a brand-new Spider-Man suit gifted to him from Tony Stark, Peter is ordered by Stark to stay low and only focus on stopping smaller criminal activity. Of course, Peter gets in over his head. SPIDER-MAN: HOMECOMING is full of fun and wit, and is easily the most humorous of the Spider-Man movies, but it’s not without some flaws creatively.

After the events in CAPTAIN AMERICA: CIVIL WAR, where Tony Stark recruited Spider-Man to help stop Captain America, Peter is sent back to his home in Queens, New York, where he lives with his Aunt May. He tells May he’s doing an internship for Stark Industries, but in reality, everyday after school, he dons the Spider-Man suit and stops petty crimes on the street. He hopes Stark will realize his value and bring him on as an Avenger.

It doesn’t take long for Peter’s best friend, Ned, to accidentally find out Peter is Spider-Man. Ned tries to convince Peter to use his identity as Spider-Man for personal gain, including winning the affection of Liz, the beautiful senior Peter likes from afar.

One day while stopping crime, Peter comes across some criminals with very dangerous weapons created from alien tech. Their boss is a man in mechanical wings, who nearly kills Peter.

Peter tells Tony Stark about this encounter. Stark essentially orders Peter to leave jobs like that to the big boys, but Peter doesn’t listen. He starts investigating with Ned as to who might be selling these dangerous weapons. Peter’s inexperience causes problems, however, and puts people in danger. So, Tony Stark takes away his fancy Spider-Man suit and tells him if he’s not something without the suit, then he doesn’t deserve it.

Can Peter discover what a real hero is and save the day?

SPIDER-MAN: HOMECOMING has a lot going for it. There’s great humor, a terrific Peter Parker portrayed by the excellent Tom Holland, and the support of Marvel’s other great characters, like Tony Stark and Captain America. However, beneath the fanboy hype that firmly believes Marvel can do wrong, is an emotionally tepid, lazily written movie. For example, the interactions between Peter Parker and Aunt May are stale in comparison to the excellently written relationship in the original SPIDER-MAN trilogy starring Tobey Maguire. In fact, the HOMECOMING writers, producers and director rush through important character interactions and development to get to the action. Of the other actors, Robert Downey, Jr. as Tony Stark, Michael Keaton as the villain, and Jacob Batalon all shine in their roles, even though Marisa Tomei’s performance suffers because of the bad writing.

The worldview of SPIDER-MAN: HOMECOMING is moral and redemptive for the most part. Peter learns he needs to be someone of character without the suit, sacrifice is exemplified, and even loving your enemy to a degree is encouraged. Also positively, when Peter Parker tells Tony Stark he wants to be like him, Tony responds that he wants Peter to be better than him. That said, there are several politically correct and leftist statements made by students.

Because of these elements, MOVIEGUIDE® advises extreme caution for younger teenagers and children.