"Violent Action with Humor and Heart" 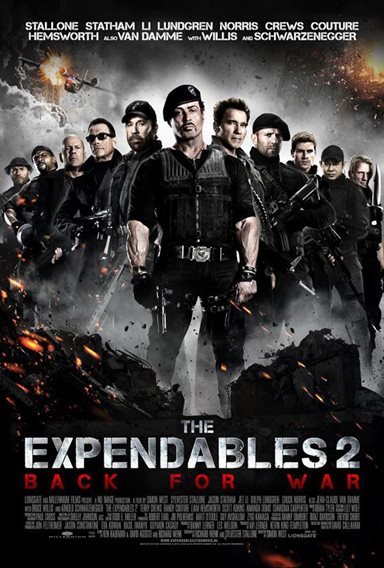 THE EXPENDABLES 2 combines very strong action violence with humor and heart. In the story, the mercenaries from the first movie tangle with a villain played by Jean-Claude Van Damme. Led by Sylvester Stallone as the mercenary leader Barney Ross, the good guys have to stop Van Dame’s character from stealing five tons of weapons-grade plutonium. This time it’s also personal. Because the villain viciously killed one of their guys purely out of spite.

THE EXPENDABLES 2 is basically a popcorn action movie. That said, star and co-writer Sylvester Stallone and his cast (which includes Bruce Willis, Arnold Schwarzenegger, and Chuck Norris) have added a lot of heart and humor to the story. For example, they make fun of each other’s action star personas. There’s also a lot of positive camaraderie on hand. Surprisingly, there’s one short scene with positive, overt Christian content. EXPENDABLES 2 contains no “f” words and no strong profanities. There is, however, plenty of other foul language, plus bloody action violence. So, extreme caution is advised.

(BB, CC, LLL, VVV, N, AA, MM) Strong moral worldview about saving the world and bringing a murderous villain to justice, with some overt Christian content such as a woman being helped by the good guys is shown praying in a church but her prayer is not heard, mitigated by a revenge theme; 26 obscenities (no “f” words in the theatrical version), one “I swear to God” and one use of Godforsaken to refer to a place; very strong action violence with blood includes people shot, people decapitated through gunfire, martial arts fighting, regular hand-to-hand combat, gun battles, explosions, bodies torn apart through explosions or heavy caliber weapons, it’s implied that one man cut off another man’s head and put it into a sack; no sex scenes; no nudity; alcohol use and slight drunkenness, plus a bar scene; and, revenge theme not rebuked.

THE EXPENDABLES 2 combines very strong action violence with humor and heart. The theatrical version has a lot of obscenities, but no profanities and no “f” words.

The movie opens with a bang as Barney Ross (Sylvester Stallone), Lee Christmas (Jason Statham) and their team of mercenaries rescue another mercenary and a Chinese billionaire from some bad guys. Back home in New Orleans, the CIA’s elusive Mr. Church (Bruce Willis) tells Barney he owes him one more job.

Church sends Barney and his team to Eastern Europe to recover a digital map of something. One of their team, however, is caught by another group of mercenaries led by Jean Vilain (“Vil-anne”), played by Jean-Claude Van Damme. Vilain says he’ll exchange Barney’s man for the recovered digital map. Barney agrees, but Vilain viciously kills the man anyway.

Barney and his men learn that the map tells the location of five tons of weapons-grade Russian plutonium. Vilain plans to sell the plutonium to the highest bidder.

Now, Barney and his guys have to track and kill Vilain and his men not only out of revenge for their friend’s death, but also to take back the plutonium. They get help from three other guys, the aforementioned Mr. Church played by Mr. Willis plus characters played by Arnold Schwarzenegger and Church Norris.

THE EXPENDABLES 2 is basically a popcorn action movie. That said, star and co-writer Sylvester Stallone and his team have added a lot of heart and humor to the story.

For instance, the filmmakers have built in a lot of friendly camaraderie among the good guys. There’s also a major sequence where the good guys help the women in a local town free their husbands and sons who’ve been kidnapped by the bad guys to dig the plutonium that’s been buried in the nearby mine. At one point, one of the women is shown praying in church as the good guys begin to storm the mine.

As for the humor, the cast and crew have a lot of fun with the personas of all the action stars in the movie. For example, when Schwarzenegger at one point says, “I’ll be back” (the famous line from his first TERMINATOR movie), Stallone quips, “You’ve been back enough!” There are also some Chuck Norris jokes in the script.

Thus, EXPENDABLES 2 is a lot of fun and very funny, but it offers some morally and spiritually uplifting moments as well. Regrettably, the latter moments are diluted by a revenge theme, bloody action violence and the foul language. The good news is that, reportedly because of the influence of Chuck Norris, the movie contains no profanities. It also happily contains no lewd sexual content or explicit nudity.