"Too Slow and Episodic" 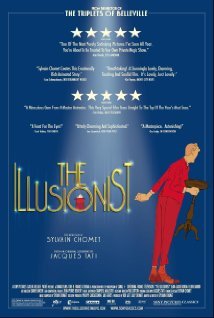 THE ILLUSIONIST is an animated French comedy about a middle-aged stage magician and the waif he picks up on his travels. Set in the late 1950s and shot without much dialogue, it is based on a story by French comic actor Jacques Tati, who made a series of striking comedies in the last century. The magician travels to England, ending up in a small village on a remote Scottish isle. There, he buys and magically produces a pair of new shoes for Alice, the poor boot-clad young maid working at his inn. Alice follows him to Edinburgh, where the magician buys other things for Alice, making her believe he conjured them up. Reality eventually overtakes this father-daughter team, however.

THE ILLUSIONIST is too episodic and slow to captivate a mass audience, despite the beautiful care of the animation. Thus, the plot needs a lot of work. There’s not much objectionable content in THE ILLUSIONIST, however, except for some drunkenness and a minor character who contemplates suicide but is interrupted. That said, the movie lacks a strong moral center, the kind of thing that makes the best movies soar far above their competition.

(B, Ro, H, M) Light moral tale mixed with some Romantic and humanist elements about a middle-aged stage magician and the girl who becomes enamored with his magic tricks until they both finally grow up and go their separate ways; no foul language; light violence include man puts rope around his neck contemplating suicide but is interrupted; no sex but young woman finds romance; no nudity; alcohol use and drunkenness; smoking; and, man doesn’t tell girl about the extra jobs he gets to buy her nice things and rock and rollers act a little effeminate.

THE ILLUSIONIST is an animated French comedy about a middle-aged stage magician and the waif he picks up on his travels. Based on a story by French comic actor Jacques Tati (Mr. HULOT’S HOLIDAY, MON ONCLE and PLAY TIME), the movie reflects Tati’s episodic taste, so it’s very slow, but with minimal laughs and gags. The animation, however, is very well done.

Set in the late 1950s and shot without much dialogue, the story gets started when the magician, having worn out his welcome in France, traveling to England to perform. A drunken Scotsman catches his act in a tent at a small bazaar and invites him to a small village there.

At the small Scottish village, located on a remote isle, the locals seem to appreciate his act more. There, the magician befriends a poor teenage girl, Alice, who seems to be about 17. Seeing that she only has boots to wear, he buys Alice a pair of shoes and convinces her that he conjured them up. When it comes time for him to leave the village, Alice follows him.

Alice notices a sign for Edinburgh. She convinces the magician to find work there.

They find a medium-sized music hall and a hotel filled with other performers, including three acrobats, a ventriloquist who only speaks through his dummy and a sad clown. Everyone becomes friendly. Alice even saves the sad clown from committing suicide by giving him a bowl of the soup she’s made. Meanwhile, in perhaps the movie’s funniest scene, the magician is suspicious of the meat in the soup, because he cannot find the rabbit he uses in his work. (SPOILER: Not to worry, though, the rabbit finally does show up, alive and well.)

Alice is very demanding, however. And, the magician can’t help but buy her a nicer coat, a nice dress and a fancy pair of high heels. All the while, he cannot bring himself to tell her that magic does not exist or that he’s driving himself to ruin trying to buy her gifts.

Eventually, Alice grows up, finds a man, and she and the magician part ways. After leaving a note telling her magic is an illusion, the lonely magician returns to France a wiser man.

THE ILLUSIONIST is too episodic and too slow to captivate a mass audience, despite the beautiful care depicted in the animation. Thus, the plot still needs a lot of work (for comparison, just look at the first part of Pixar’s UP, which manages to enthrall and move without lots of action or cartoon violence).

There’s not much objectionable content in THE ILLUSIONIST, however. The biggest things are the drunken Scotsman and the little story of the sad clown who considers hanging himself when Alice suddenly arrives with a bowl of soup that makes him go on living. That said, the movie lacks a strong moral center, the kind of thing that makes the best Pixar movies soar far above their competition.

Rent or Buy THE ILLUSIONIST: