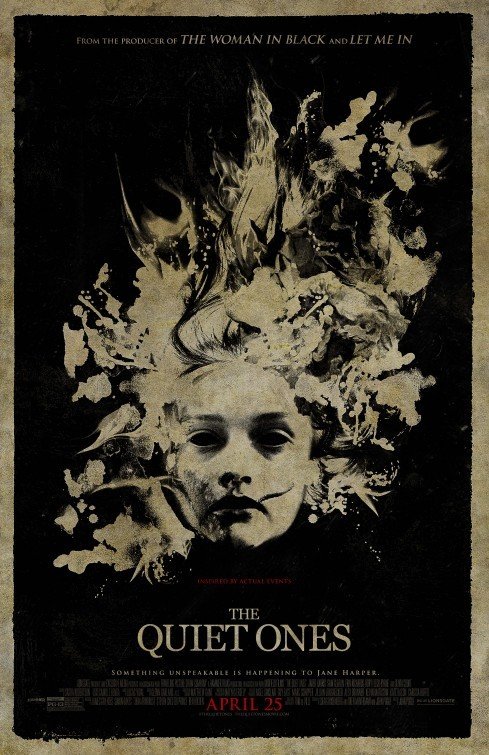 Supposedly based on true events, THE QUIET ONES is a horror movie that takes place in 1974. At Oxford University, Professor Coupland tells his students that there is no supernatural, but that everything can be answered through science. Coupland recruits Brian to film him and his team as they experiment on a disturbed girl named Jane. As the research continues, Brian grows fond of Jane, and the team starts to wonder if Jane is actually possessed. Coupland becomes more adamant in his scientific theories, and weirder things begin to happen.

THE QUIET ONES starts off intriguing as it explores various areas of belief. Sadly, the movie had the chance to end on a positive or redeemable note, but it decided to avoid the answer to demonic activity, and that answer is Jesus. That said, it’s interesting that the main character is so blinded by scientific ambition that he can’t see the obvious reality of supernatural evil. For its scary images, foul language and unedifying focus on the occult, THE QUIET ONES is a movie that media-wise families will decide to avoid.

(OO, B, C, LL, VV, S, N, A, D, M) Strong occult worldview with satanic occult symbols and references with minor allusions to Christian faith such as a crucifix necklace and an ending that shows the reality of supernatural evil, plus one man says, “Even God rested on the seventh day”; nine obscenities (including two “f” words), seven strong profanities (“GD” and “JC”), six light minor profanities; strong violence with lots of scary moments such as demon-possessed woman attacks others and mutilates herself at points and paints her body in blood, vomiting of blood, two people are brutally maimed by an invisible spirit, one of their bodies is seen, a man’s hand is bitten, a woman's hand is burned, a woman burns alive to death, and a fist fight between two men; one implied sex scene, women come onto men at three different times, demon-possessed woman starts undressing a man but is stopped, one assistant clearly sleeps around with multiple men, two people seen in bed briefly, and light kissing; upper male nudity and woman takes off her dress and viewers see her upper back briefly, and two instances of women bathing but private parts are covered; drinking of champagne; lots of cigarette smoking; and, main character lies to and deceives his assistants.

Supposedly based on true events, THE QUIET ONES is a horror movie that takes place in 1974. At Oxford University, Professor Coupland (Jared Harris) emphatically states to his students that there is no supernatural. Showing a video of a clearly disturbed young boy, Coupland explains that those who are demon possessed are merely exuding negative energy posing as an entity created in the individual’s mind. He states that, if he can cure one patient through the means of science and technology, then he can cure the world.

Coupland hires a young man, Brian, to film him and his team as they experiment and try to fix their chosen patient. Coupland asks Brian if he’s a believer because of the crucifix he wears around his neck, to which he states that he isn’t sure but merely wears it because his mother is religious. Coupland introduces Brian to the team, consisting of two assistants, Krissi and Harry. He also introduces Brian to their subject, Jane, a deeply disturbed, but pretty young woman who doesn’t remember anything of her past. As expected, when Brian starts filming the experiments, weird things begin to happen and he starts to get worried, but intrigue makes him stay.

However, the university cuts funding for the research. So, Coupland is forced to fund everything out of his own pocket. He moves the research to a large house in the middle of nowhere. As the experiments continue, Brian grows fond of Jane. Also, Coupland’s team starts to wonder if Jane truly is possessed.

THE QUIET ONES starts off intriguing as it explores areas of belief, but it doesn’t take long for the movie to go in a different direction. Jared Harris as Professor Coupland is solid and carries the movie’s believability, but the movie otherwise feels uneventful. The intensity relies too heavily on loud sound effects and music rather than plot conflict. The movie also jumps between scenes way too quickly.

THE QUIET ONES had the chance to end on a positive or redeemable note. Sadly, as the research team learns that the occult and the supernatural are in fact real, the characters, to their own detriment, never ask God to release Jane from her tormentors. Though one could see this as a morality tale, it leaves no answer to the very real problem of the demonic, and that answer is Jesus. Viewers who enjoy this genre will be much more satisfied with stories like THE CONJURING, which actually gives a hope for stopping demonic attack. That said, it’s interesting that this Hollywood movie has a character so blinded by scientific ambition that he can’t see the obvious reality of supernatural evil. Who’s the “irrational” one now?

Because of the scary images, foul language and unedifying focus on the occult, THE QUIET ONES is a movie that media-wise families will hopefully decide to avoid.