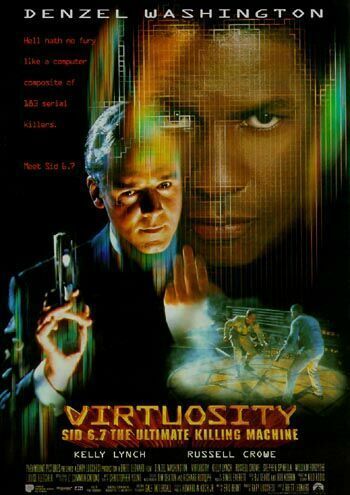 Set in futuristic Los Angeles, VIRTUOSITY tries to cash in on the latest cyber-craze: virtual reality. Parker Barnes is a former cop currently in prison for killing two innocent people during an unsuccessful attempt to rescue his wife and daughter from a terrorist. He is granted a pardon if he can destroy a "virtual" killer made of a composite of actual serial mass murderers. Filled with violence and carnage, the bloodfest overshadows the weak plot.

Don’t be fooled by the title of director Brett Leonard’s movie, VIRTUOSITY. There is nothing virtuous or remotely redeeming in this violent and senseless film. Set in futuristic Los Angeles, the film tries to cash in on the latest cyber-craze: virtual reality. Parker Barnes (Denzel Washington) is a former cop currently in prison for killing two innocent people. In prison, he has volunteered to participate in virtual reality experiments. His virtual reality nemesis, Sid 6.7, is initially just a high-tech software version of evil used in simulations to ostensibly test and train law enforcement agents. Sid is a combination of various profiles of evil: Charles Mansion, Adolph Hitler, John Wayne Gacy, Ted Bundy, and Matthew Grimes. When Sid goes haywire, Barnes is offered a pardon if he can stop him.

Though many horrible things can be said about this film, the saddest part is the huge waste of Denzel Washington’s exceptional acting abilities. One can only wonder what he, the writer, director, and producer were thinking when he took this part. Filled with murder and mayhem, it is a far cry from his serious and touching performances from the past. VIRTUOSITY is an impossible film — from plot to plausibility.