"A Personal Relationship with God Thru Jesus Restores Faith and Hope" 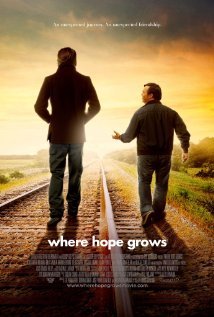 WHERE HOPE GROWS is a Christian drama about a failed baseball player whose faith is restored when he makes friends with a boy with Downs Syndrome. Calvin Campbell’s life has been stagnant ever since he froze at bat in the Major Leagues. Every day, Calvin drinks and pays little attention to his daughter. When Calvin goes to the supermarket and meets a clerk there called Produce, with Down Syndrome, he makes a friend. Produce makes friends with everyone and radiates joy. Calvin and Produce develop a friendship that restores Calvin’s faith and hope.

WHERE HOPE GROWS has a Christian worldview, but also has some dark elements. Calvin drinks heavily, almost to the point of death and pays little attention to his daughter. However, Produce radiates joy and ultimately leads Calvin and his daughter to church. WHERE HOPE GROWS could have been edited better, but it’s well made, with some fine acting from Kristoffer Polaha as Calvin. The heart of the movie comes from David DeSanctis, who does a great job playing Produce. WHERE HOPE GROWS is an inspiring movie for teenagers and adults.

(CCC, BB, L, V, S, AA, M) Christian Worldview, character carries his Bible with him, scripture reading, scene in church, characters pray, and main character goes to Alcoholics Anonymous and stops drinking, but the protagonist is self-destructive before he’s redeemed; two profanities and two obscenities; man hit with car, main character drinks almost to the point of death, two characters drink and drive multiple times, teenage boy forcefully tries to take advantage of a teenage girl, teenage boy kicks character with Downs syndrome, character hits teenage boy in the head to protect the teenage girl; kissing and teenage boy tries to take advantage of a teenage girl where you hear the teenage girl struggling, but his attempt fails; no nudity; heavy drinking and protagonist is an alcoholic who eventually gets help and stops drinking; no smoking or drug use; and, lying and single parenthood due to a child out of wedlock.

In WHERE HOPE GROWS, a baseball player fails to make it in the Major Leagues and becomes an alcoholic, but making friends with a Down Syndrome boy restores his hope and faith. WHERE HOPE GROWS is well made and has a strong Christian worldview, but some dark elements warrant caution.

The movie opens with Calvin, a baseball player who failed to make it in the Major Leagues, back at the bar, even though his daughter Katie has a birthday celebration ready for him at home. Calvin has multiple drinks and drives home to Katie, who confronts him for always being at the bar.

The next day, Calvin wakes up. Katie tells him there’s no more coffee left, so Calvin goes to the supermarket, where he buys even more alcohol. While shopping, Calvin is approached by a grocery store clerk with Downs Syndrome, who goes by the name Produce. Immediately, Calvin sees the joy that radiates from Produce and wonders where that joy originates. Produce not only hugs everyone who comes into the supermarket, he also cares for them. Every day Produce strives to be a better employee to be Employee of the Month.

Seeing the joy and compassion Produce clearly radiates, Calvin starts going to the supermarket more and more to see Produce. Calvin wants to figure out what makes Produce tick and what makes him so happy.

One day Calvin decides to teach Produce how to swing a bat and takes him to the local batting cages. At the batting cage, the local baseball team owner approached Calvin and asks him to come and try out to be the team’s manager. At first, Calvin says no because he only has bad memories from baseball.

When Calvin tells Katie he has the baseball job interview, she gets very excited for her father, and they decide to celebrate after he returns. The day of the interview comes and Calvin goes golfing with his friend and drinking buddy Milton. They start playing, get in an argument, and Milton tells Calvin he has made nothing of himself after he froze at bat in the Major Leagues. Angered by this, Calvin runs from his friend and drinks almost to the point of death.

Will Calvin be able to control his drinking and become a father to his daughter before it’s too late?

WHERE HOPE GROWS is well made, with some fine acting from Kristoffer Polaha playing the main character Calvin. The heart of the film, however, comes from David DeSanctis, who does a great job playing Produce. This is the first time someone with Downs Syndrome has been chosen for a leading roll. Overall, the plot is well handled, but some elements could have been cut or edited differently.

WHERE HOPE GROWS has a strong Christian worldview, but contains some mature material. Produce radiates joy, and it’s implied that it comes from his Christian faith. Ultimately, his joy appeals to the protagonist, Calvin, so much that he goes to church, though there are some heavy scenes before that happens. For example, Calvin is an alcoholic who doesn’t spend time with his daughter, leading her to get involved with the wrong guy. One scene shows this guy trying to take advantage of her in the middle of a public space. There is also a scene where Calvin almost tries to drink himself to death.

WHERE HOPE GROWS has a positive, inspiring ending, but Movieguide® advises caution for the movie’s more mature scenes.

Rent or Buy WHERE HOPE GROWS: