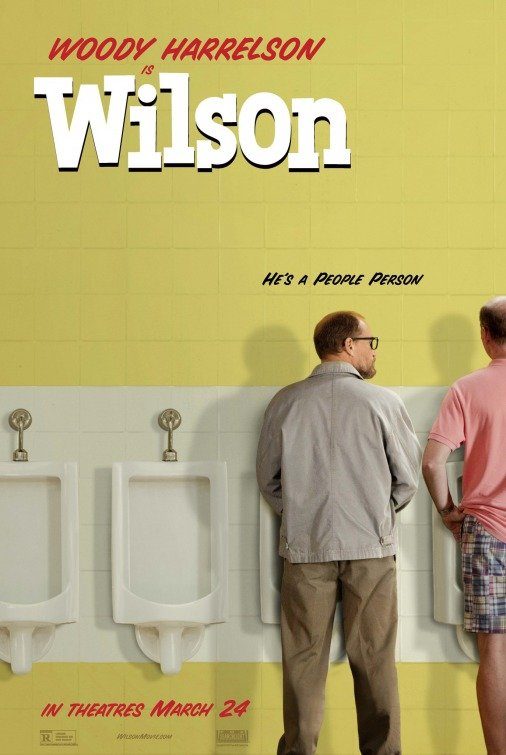 WILSON stars Woody Harrelson as a middle-aged free spirit who finds himself alone in the world after his father dies. Wilson shares a small apartment with his dog, but his need for human companionship sends him searching for his long-lost love, Pippi. Seventeen years ago, they broke up after she got pregnant, but she never told Wilson she gave up their daughter for adoption. He finds Pippi in another town. When she tells him about the baby, he convinces her to help him track their daughter down. This leads to a series of family adventures.

WILSON is based on a graphic novel of the same name. The world of WILSON is absurdist in nature. The movie’s quirky qualities almost trample on its comedy. There is a mixture of pathos with the humor, reminiscent of a Chaplin flick. However, the filmmakers make no bones about mocking Christianity or religion. The movie calls anyone with such inclinations “brain damaged” and describe religion as a bunch of “mumbo jumbo.” WILSON also contains almost constant foul language and some other crude content and immoral behavior.

(HHH, AbAbAb, C, Ho, Acap, B, LLL, V, SS, A, DD, MM) Very strong humanist worldview rejects the concept of God and religion (religious people are called “brain-damaged”) and main character mocks Christianity in several scenes while several scenes in a prison depict prisoners reading the Bible, several scenes show a cross hanging on a wall and a pastor appears in a couple scenes, a joke is made about homosexuality and a woman talks about her boyfriend revealing that he’s homosexual, a degrading anti-capitalist comment is made about corporations, and there are some pro-life sentiments in the movie where adoption is favored over abortion; at least 128 profanities and 26 profanities, plus a scene depicts men in a urinal area and offensive slang terms are used for women; light violence includes a woman slaps another woman in the face, a woman beats up a man, two women get into a fight, a man is beat up in a prison by other prisoners, a comment is made about rape in prison, there is a death scene in a hospital; depicted fornication scene, implied fornication in a couple scenes, a reference to bestiality, man solicits prostitute for oral sex, a few scenes have sexual innuendo, a man refers to self-abuse, a comment about rape in prison, and two characters get pregnant out of wedlock, including a teenage girl; no explicit nudity but a woman is shown in her underwear while in bed with a man; several scenes depict drinking wine; no smoking but a woman talks about her past with drug addiction; and, a prisoner has a swastika tattoo on his face, a woman talks about nearly getting an abortion, a woman gets pregnant out of wedlock but gives up her baby for adoption, teenage girl gets pregnant, girl lies to her parents repeatedly, and dysfunctional families play a major role in the story.

WILSON is an absurdist comedy about a middle-aged man who reunites with his long-lost girlfriend, and they set out to find their daughter who was given up for adoption 17 years ago.

Wilson is an eccentric, free-spirited middle-aged man, who lives in a small apartment with his dog. Time seems to have stopped for Wilson, a proud luddite, who prefers human companionship to the cold glow of the screen. He spends his days walking his dog and striking up unwanted conversation with strangers. The discussions are either filled with his critiques about what’s wrong with modern society (often offending the other person about their lifestyle), or philosophical musings about his own journey in life. His desperation for romance at one point results in rear-ending a woman’s car just so he can ask her on a date. Of course, he’s called a psycho and turned down.

One day, Wilson receives word his elderly father has taken a turn for the worse, so he leaves his dog with a sitter and goes to be with his father in the hospital. There his father passes away, and Wilson realizes he’s the last of his family still alive. Grieving and feeling alone in the world, he has the idea to look up his ex-girlfriend, Pippi. After Pippi found out she was pregnant, the two broke up 17 years ago, planning to have an abortion. She moved away, but never told Wilson that she’d had the baby and had given it up for adoption. All of this is revealed when Wilson tracks her down in another town and clumsily convinces her to stay with him for a while.

The news that he’s not the last of his family after all sparks an eagerness in Wilson to meet the daughter he never knew he had. He hires a private investigator to find her and then recruits Pippi to go along with his scheme. She equates it to stalking and thinks it’s a bad idea. However, she’s been a failure all her life and the black sheep of her family. Seeing her daughter would give her a sense of accomplishment and pride.

Wilson and Pippi eventually meet their daughter, Claire, who stunningly looks nothing like either of them. A rich couple adopted Claire, so she leads a luxurious but lonely life, barely tolerating her adopted parents who are usually too busy to care much about what’s going on in her life. Wilson and Pippi take advantage of that and whisk Claire away on a series of outings, pretending for just a little while that they’re a happy little family. It doesn’t last long when Claire’s parents find out what’s happening, and Wilson’s life starts to unravel once again before his eyes.

WILSON is based on a graphic novel of the same name, written by the same author. The world of WILSON is absurdist in nature, and gives itself over to a quirkiness that almost tramples on the movie’s comedic aspects. There is an odd mix of realism and surrealism, and the movie never really settles on what it wants to be. There’s a feeling of oil and water to it, but perhaps that’s part of the quirkiness it wants to have. Pathos is merged with the humor, which is sometimes reminiscent of a Chaplin flick. The scenes where Wilson is grieving, or loses something very precious to him, are very effective and serve to ground the movie to something that’s relatable for everyone. One bothersome aspect is the character of Claire. Though she’s meant to be an emotional counterpoint to Wilson’s more outgoing personality, she never comes out of her shell, and there’s a sense with the actress performing the role that, if she could have chosen not to be in the movie at all, she would have.

WILSON has a very strong humanist worldview. The filmmakers make no bones about mocking Christianity or anyone who believes in a deity. They call anyone with such inclinations “brain damaged,” and religion a bunch of “mumbo jumbo.” One scene puts Wilson on a bus, holding a small Bible. He pretends to be sharing the gospel with a teenage boy, then tells him he’s just kidding, cracking a crude joke about Jesus not really caring.

The characters in WILSON use a lot of crude terms. The foul language is nearly constant. Dysfunctional families play a huge part of the story. Wilson never got along with his dad; Pippi is a recovering drug addict hated by her family; Claire’s adopted family ignores her; and, anytime the movie introduces a normal family, Wilson mocks them. Sex is treated causally, and Claire ends up pregnant, following in her birth mother’s footsteps. The only good news is that abortion is rejected as a solution to an unwanted pregnancy, in favor of adoption.