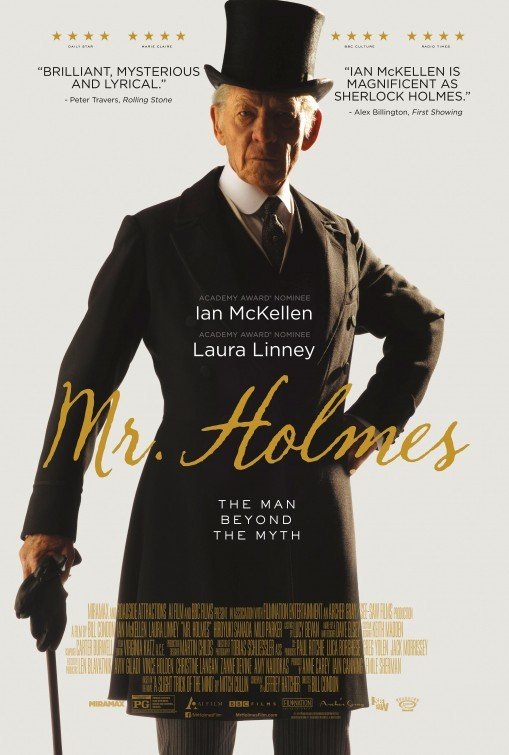 MR. HOLMES is a mystery drama based on the popular fictional detective Sherlock Holmes. Unlike prior Sherlock movies, MR. HOLMES is based on the detective’s life after retirement. Holmes has retired to a remote farmhouse by the sea. Mrs. Munro and her son, Roger, move in to assist him in his old age. Holmes, grappling with dementia, finds solace in his beehives. Through the bees, he develops an unassuming friendship with Roger. The two develop an unbreakable bond giving Holmes the strength he needs to remember the clues in an unsolved case from his past.

MR. HOLMES is an eloquently shot film combining the precise British dialect with beautiful images of vast landscapes. The story moves a bit slow and caters to an educated audience, bouncing back between present day and flashbacks. It takes on a positive worldview with the protagonist, Holmes, believing in the morality of good versus evil. At one point, Holmes concludes, “Logic doesn’t solve matters of the heart.” MR. HOLMES is a relatively family-friendly movie, but caution is advised for younger children because of themes involving murder and suicide.

(BB, C, V, M) Strong moral worldview emphasizing forgiveness, honoring one’s parents, generosity, honesty, and compassion, main character becomes friends with a little boy who lost his father in the war and teaches him to respect his single mother and forgive those that upset you, supporting Christian worldview promotes good virtues and the morality of right versus wrong, flashbacks in the movie show Mr. Holmes choosing ethical cases to solve for the benefit of humanity; no obscenities or profanities; light violence when mother yells and pushes Mr. Holmes away when she sees her wounded son, and a character commits suicide by stepping in front of a train; no sex or kissing; no nudity; no use of alcohol; no smoking; no illegal drugs used, with light use of poison when woman buys a bottle of poison to kill her husband; and, light miscellaneous immortality, woman lies to her husband and plots to kill him, and woman steals her husband’s money.

MR. HOLMES is a mystery drama based on the popular fictional character, Sherlock Holmes. It takes a new twist on a classic tale telling a story about Mr. Holmes after retirement, with a strong moral worldview.

Set in 1947, Sherlock Holmes, is an aging old man struggling with memory loss. He has just returned from a trip to Japan, in search for a rare plant he hopes will restore his memory. Set in a remote farmhouse near the sea, Holmes spends his final days tending to his bees, finding peace in their company and believing their honey, like the plant from Japan, will counteract his early memory loss.

Unfit to care for himself, a housekeeper, Mrs. Munro, and her son, Roger, move in to assist him. Roger, who has recently lost his father in the war, forms an unlikely friendship with Mr. Holmes. Holmes comes to love the boy as his own while Roger provides the encouragement Holmes needs to help complete an unsolved case from his past. Through a series of flashbacks, the audience learns of the tragic case that forced Holmes into retirement.

Years ago, a young man sought out Holmes’ help with his failing marriage. After his wife miscarried twice, she became numb, distancing herself from her husband. The wife, played by Hattie Morahan, was so angry from the loss of her children she plotted to poison her husband, take his money and leave. Holmes tries to stop the woman, but a tragedy occurs. The tragedy causes Holmes to conclude, “Logic doesn’t solve matters of the heart.” This rounds out a recurring theme in the movie that facts can’t mend broken hearts.

MR. HOLMES is a beautifully shot movie. The cinematography, set design and images of the seaside elicit a beautiful, poetic tone throughout. The story starts out slow and is a bit drawn out, but with the presence of the young Roger it picks up, adding a newfound reason to care for the characters. Based on the novel A SLIGHT TRICK OF THE MIND by Mitch Cullin, the movie does an excellent job conveying the life of a real man, not the celebrity. It breaks down the stereotypes of fame and fortune showing that every person, even the great Sherlock Holmes, grapples with something within themselves.

MR. HOLMES has a strong moral worldview of honoring your parents, forgiving those that wronged you, always being honest, and doing everything with compassion. MR. HOLMES is a positive influence for young children showing people with good virtues can rise to the top. The movie appears to have a Christian, redemptive worldview emphasizing putting others before yourself and being kind to everyone, even those that can do nothing for you. MR. HOLMES doesn’t have any harmful explicit content, but the subject of suicide warrants caution. Its drawn out shots mixed with classical music will leave one feeling refreshed, but this classical approach caters to a more mature, patient audience.