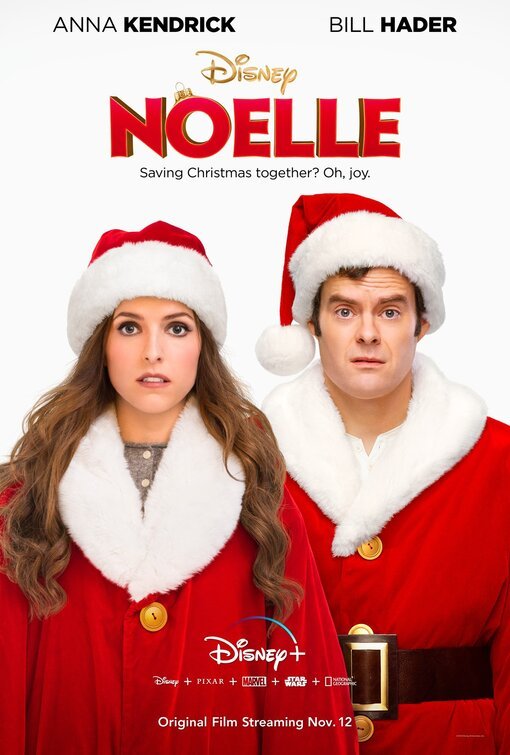 NOELLE follows the story of a young woman named Noelle Kringle who’s passionate about Christmas. After her father dies, she helps her brother, Nick, train to become the new Santa. When Nick gets overwhelmed by the pressure of becoming Santa, Noelle encourages Nick to get away for a weekend to relax. However, when Nick doesn’t return, the North Pole panics to find a new Santa. After a bad choices, the town decides that Noelle is the right fit, but can she pull it off?

NOELLE is very entertaining, heartwarming and joyful. The cast does a great job. It’s fun to watch their journeys. NOELLE has a strong moral worldview that promotes kindness, hope and family. The title character takes over the family trade so her brother can be happy. Also, she explains that Christmas makes people nicer, gives them hope, and makes them be more selfless. However, NOELLE contains some slapstick violence and fails to mention Jesus or the biblical elements of Christmas. Also, the movie has some politically correct feminist moments, magic and references to Buddhism and Hinduism. Extreme caution is advised.

(BB, C, Pa, O, PC, Fe, FR, V, A):
Dominant Worldview and Other Worldview Content/Elements:
Strong moral worldview promotes kindness, hope and family and includes a woman takes over the family trade so that her brother can be happy, woman explains that Christmas makes people nicer, gives them hope and makes them be more selfless, mixed with some pagan and magical elements, Jesus is never mentioned (although Santa visits a homeless shelter inside a church), and the whole movie revolves around Santa being the joy of Christmas instead of Jesus, magical elements include flying reindeer, the ability to tell by a look whether someone is “naughty” or “nice,” and a magical Santa suit, with some politically correct moments are mentioned such as “blindly following” the tradition of Santa being male and a man comments on his sister’s “female” energy, plus a man says he’s a Buddhist, a man works at a yoga center with Buddha statues in the background, woman blows out a candle at a yoga studio, and it’s indicated that this has negative spiritual connotations, people meditate in a circle, and two people use the traditional Hindu greeting “namaste,” which means that I recognize the god inside you
Foul Language:
No obscenities or profanities
Violence:
Woman pushes her brother down a chimney, man and woman both fall down chimneys again, woman smacks her brother in anger, Santa’s sleigh crash lands a couple times, and a girl assaults a police officer by kicking him
Sex:
No sex
Nudity:
No nudity
Alcohol Use:
Main character takes a sip of an alcoholic drink but spits it out
Smoking and/or Drug Use and Abuse:
No smoking or drugs; and,
Miscellaneous Immorality:
Nothing else objectionable.

NOELLE follows the story of a young woman named Noelle Kringle who must take over the family business of being Santa after her father passes away and her brother runs away. NOELLE has some entertaining, heartwarming moments, fun characters, and a strong moral worldview promoting kindness, family, being selfless, and hope, but Jesus is never mentioned, and the movie contains some politically correct elements, slapstick violence, magic, and false religion.

NOELLE begins as a young girl and boy are sleeping on Christmas Eve, waiting for Santa to arrive. When Santa enters through the chimney, a young Noelle jumps out and surprises him, and Santa reveals that Noelle and Nick are his children. Nick receives the Santa hat for Christmas, meaning he will take over the family business when Santa retires.

The story jumps to the present, and Noelle and Nick are all grown. It’s the first Christmas that Nick will be Santa, as their father passed away months prior. Nick is hesitant to be Santa as he can’t master the traits such as flying the sleigh, understanding the naughty/nice list, or speaking different languages. Nick begins cracking under the pressure, and Noelle suggests he escape to a nice warm place over the weekend.

Nick leaves for Phoenix but doesn’t return over the weekend. Noelle reveals to the North Pole that she was the one who suggested that Nick take a weekend vacation. The whole town turns on her and replaces Nick with their cousin named Gabe. Gabe tries to make too many changes to the Christmas tradition, and the town is furious. To fix her mistake, Noelle travels to Phoenix and hires a private investigator to track down Nick.

After locating Nick in Phoenix, Noelle encourages him to come home, but he wants to stay in Phoenix. After convincing Nick to come home, he tells the entire North Pole that Noelle should be the new Santa. Noelle agrees to becoming Santa and leaves on Christmas Eve to deliver gifts. Along the way, she stops and gives gifts to all the people she met in Phoenix. Noelle arrives back at the North Pole and reveals that her job was successful.

NOELLE is very entertaining, joyful and is heartwarming. The movie also has some great comedy moments of outlet malls during the holidays and reindeer that eat junk food. The movie has a fun and fantastic cast made up of Anna Kendrick, Bill Hader, Shirley MacLaine, and Kingsley Ben-Adir. Also, the North Pole set is very imaginative and will excite any child who sees it.

NOELLE has a strong moral worldview that promotes kindness, hope and family. The title character takes over the family trade so her brother can be happy. Also, she explains that Christmas makes people nicer, gives them hope, and makes people be more selfless. However, NOELLE contains some slapstick violence and fails to mention Jesus or the biblical elements of Christmas. Also, the movie is marred by politically correct feminist moments, yoga, magic, and references to Buddhism and Hinduism. Extreme caution is advised.