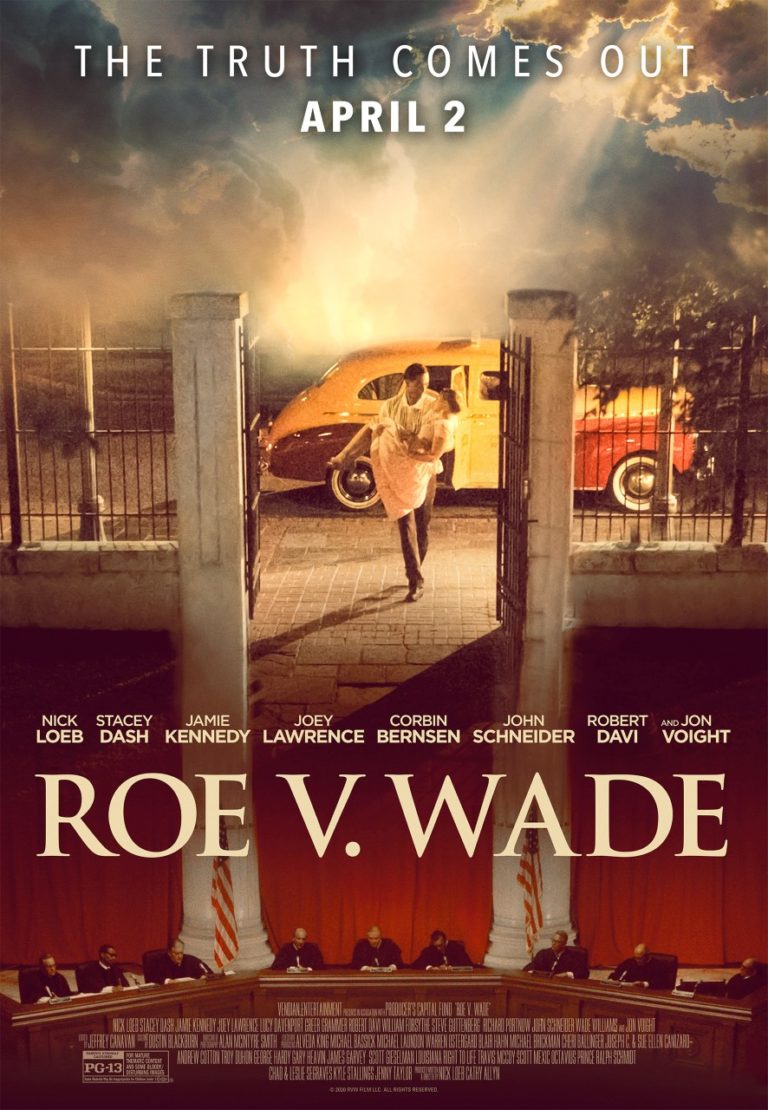 ROE V. WADE is a historical drama that follows the events leading up to the groundbreaking 1973 Supreme Court case which would legalize abortion in the United States. Dr. Bernard Nathanson and Dr. Mildred Jefferson square off in a national battle between the pro-life and pro-abortion camps. The movie seeks to uncover the truth about the landmark court ruling and reveal the various motivations, lies and connections surrounding the event.

(BB, C, VV, S, A, M):
Dominant Worldview and Other Worldview Content/Elements:
Strong moral worldview with strong pro-life message about the horrific reality of abortion, although it relies on objective fact to convey this message, plus there is a conversion scene and a baptism scene in a church, as well as themes of faith, honesty, justice, and redemption
Foul Language:
No foul language
Violence:
All abortion related violence, a suction machine is shown sucking out blood from women at an illegal abortion clinic, buckets of what is assumed to be aborted babies is show, a dismembered baby is shown, and there are several other scenes that depict abortions without blood, plus descriptions of abortion and a mention of suicide
Sex:
No implied or depicted sex, but some discussion regarding sex in the context of the abortion argument and one brief crude joke
Nudity:
No explicit nudity, but several scenes on a beach include women in bathing suits
Alcohol Use:
Alcohol is consumed several times
Smoking and/or Drug Use and Abuse:
No smoking or drugs;
Miscellaneous Immorality:
Most of the caution comes from both the intentionally unsettling description and depiction of the abortions is intentionally upsetting, but there is also some lying.

ROE V. WADE begins in 1985 as Dr. Bernard Nathanson is getting questioned about his views on abortion. The other man challenges a discrepancy in two of Nathanson’s statements. However, before Nathanson can answer, the movie cuts to Nathanson playing his father in chess years before the interview.

Dr. Nathanson narrates various events of the movie, mirroring the technique used in THE BIG SHORT, to help the audience follow what’s happening. At the height of the Women’s Rights movement, Nathanson explains how he got wrapped up in a plan to get abortion legalized. Nathanson teams with Larry Lader, a prominent supporter of Planned Parenthood founder Margaret Sanger, and with Betty Friedan, the leading feminist activist, a Marxist.

Dr. Nathanson believes he’s saving women. However, through his narration, Dr. Nathanson reveals that his colleagues had different motivations. For Friedan, it was women’s rights, and for Lader, it was strictly about the money.

With Dr. Nathanson, Lader and Friedan leading the way, they successfully get abortion legalized in New York. This decision wakes up the most prominent pro-life opposition in New York, the Catholic Church, and pro-life activists, scholars and physicians.

After New York, Lader looks to build a case against the U.S. government to legalize abortion across the country. They send out two recent grad students in search of a pregnant girl to make their case around. They find a young woman named Norma McCorvey, famously known as “Jane Roe,” and they start to build a case against Henry Wade, the district attorney of Dallas County.

With their pawn established, the case appears before both state and federal courts. In opposition, Dr. Mildred Jefferson, the first African American woman to graduate from Harvard Medical School, leads an anti-abortion cause. However, the pro-life activists realize they are fighting one of the most well-funded revolutions in 20th Century America.

ROE V. WADE offers a unique, ultimately powerful perspective on the 1973 Roe V. Wade court case by viewing it from Dr. Nathanson’s viewpoint, including how he went from becoming pro-abortion to being a pro-life, Christian activist. The movie is stylistically compelling, but some of the story, including the timeline, becomes a little muddled. ROE V. WADE seeks to present historical facts and asks important questions about morality, the role of racism in the case, and Christian faith. It’s not a strictly religious, faith-based movie, but it stresses themes of protecting the unborn, honesty, redemption, and justice. Due to the realistic depiction of abortion in the 1970s, MOVIEGUIDE® advises extreme caution for ROE V. WADE, especially for younger viewers.