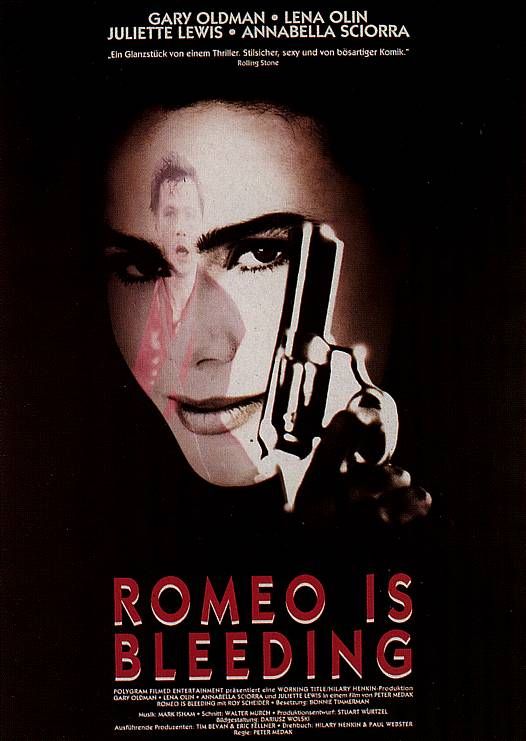 As an example of "film noir," ROMEO IS BLEEDING is as dark and evil as they come, a two-hour tour of murder, deception and bleak, gasping despair. An NYPD cop, already seriously compromised by marital infidelity and acceptance of major bribes from the mob, faces off with a vicious and seductive terminatrix. The results are bloody, brooding and desolate.

ROMEO IS BLEEDING is an example of “film noir,” or “black film,” not referring to race but to the dark doings of characters caught up in crime and betrayal. This particular specimen is as dark and evil as they come, a two-hour tour of murder, deception and bleak, gasping despair. The movie revolves around Jack, a NYPD policeman, whose life and career have been seriously compromised by his adulterous affairs. His wife has even collected a photo album of his indiscretions, including his current fling with Sheri, a wispy cocktail waitress. Jack has also collected money for months from a local crime lord. Jack’s shady activities soon catch up with him in the person of Mona Demarkov (Lena Olin), a literal terminatrix, cold blooded and virtually indestructible. By the film’s end, he stands to lose everything in a shootout following which he enters a witness relocation program.

ROMEO IS BLEEDING is so desperately lacking in basic humanity that a gnawing sense of frustration gives way to virtual rage at everyone involved in this nihilistic production. “There is no one who does good, not even one,” wrote the Apostle Paul about the human race in his letter to the Romans, and he may have had this wretched film in mind as well. Despite reasonably skilled performances all around, this is a movie to avoid at all costs.