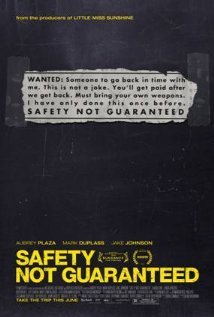 SAFETY NOT GUARANTEED is a quirky, rather funny romantic comedy with a science fiction twist. Jeff, a Seattle reporter, travels to a small town with two younger interns, including a shy, aimless young woman named Darius. They are investigating a man who placed a Craigslist ad asking for a partner to travel back in time with him. They find the man, a goofy grocery store cashier named Kenneth. Jeff pretends to answer the ad, but Kenneth is suspicious. So, Darius finds a better way to approach him. Kenneth is intrigued by her mystery, so he accepts her on a trial basis. Kenneth is a bit weird, but completely sincere, and Darius begins to fall for his charms. She begins to wonder seriously if he can indeed build a time machine.

SAFETY NOT GUARANTEED humorously builds to a touching, surprise conclusion. However, the worldview is mixed because the older reporter encourages the other intern to lose his virginity. Also, the movie views Kenneth and Darius as two star-crossed lovers lost in a mean, uncaring world without God. Finally, SAFETY NOT GUARANTEED has plenty of strong foul language. So, extreme caution is warranted.

(PaPaPa, RoRo, B, H, LLL, V, S, N, AA, D, MM) Very strong mixed or pagan worldview with strong Romantic elements in main story and one major subplot, strong pagan elements in parts of one of two major subplots, and some morally uplifting elements and some humanist qualities; about 36 obscenities (including plenty of “f” words) and three light profanities; some light violence includes minor car chase, light armed robbery, man who thinks he’s going back in time practices shooting a gun with the woman going with him who’s really a reporter working undercover, and man pulls rifle on people in car he thinks are following him, but they aren’t the ones who are following him; implied fornication between side character and old flame, implied fornication in hotel between 21-year-old college student and girl he picks up in town, man crudely mentions oral sex he received in high school, brief passionate kissing, and several light verbal references to fornication, including older young man encourages 21-year-old college student to lose his virginity and father mentions adult daughter’s virginity and lack of any boyfriends; upper male nudity and woman lies under covers; alcohol use and drunkenness in one sequence; smoking; and, deception, stealing, reporter runs up expenses on company credit card, spying, and trespassing.

SAFETY NOT GUARANTEED is a quirky, funny low-budget romantic comedy with a science fiction twist. It has a lot of charm, but the charm is undermined by strong foul language and Romantic, pagan attitudes toward romance, love, and sex.

The movie follows Darius, a shy, aimless young woman working as an intern for a Seattle magazine. She volunteers to help investigate the story behind a Craigslist ad where a man is asking for a partner to travel back in time with him. Darius and another intern, an Indian college student, go to the small rural town with the post office box in the ad. Leading them is a senior reporter named Jeff, who really just wants to reconnect with his favorite high school girlfriend.

The trail to the ad leads them to a goofy young man named Kenneth, who seems to really think he’s building a time machine. Jeff tries to make contact with Kenneth, but Kenneth is suspicious of him. So, Darius tries her hand at meeting Kenneth, in a very cute, funny scene at the small grocery store where Kenneth works.

Darius finds herself falling in love with Kenneth. She even begins to believe his time travel story. Meanwhile, Jeff and his old flame are in the throes of a fling that may become serious.

SAFETY NOT GUARANTEED humorously builds to a touching, surprise conclusion. The parallel love stories are shot and performed perfectly, with a subtle beauty of wounded souls learning to trust each other and express their innermost fears. SAFETY is also packed with witty punchlines and an exciting mystery about whether Kenneth is mad or a genuine genius. However, the subplots involving Jeff and the Indian intern take the viewer’s attention away from the main story.

Regrettably, there’s plenty of strong foul language in SAFETY NOT GUARANTEED. Also, because of the incidental subplots, the movie has a mixed worldview with Romantic and pagan notions about romance, love, and sex. Regarding the latter problem, Jeff convinces the Indian intern that he should hurry up and lose his virginity when he’s young, before life leaves him in the dust. This hedonistic attitude doesn’t infect the charming love story between Darius and Kenneth. However, their relationship does have a Romantic tone. For example, the movie depicts them as two star-crossed lovers lost in a mean, uncaring, false world. That’s one reason they want to travel back in time to fix the problems that have haunted them.

The worldview problems, foul language and sexual immorality in SAFETY NOT GUARANTEED warrant extreme caution. They detract from what is otherwise a fun movie with an inspiring surprise ending that may have some viewers cheering.