"Appealing and Gripping But Flawed" 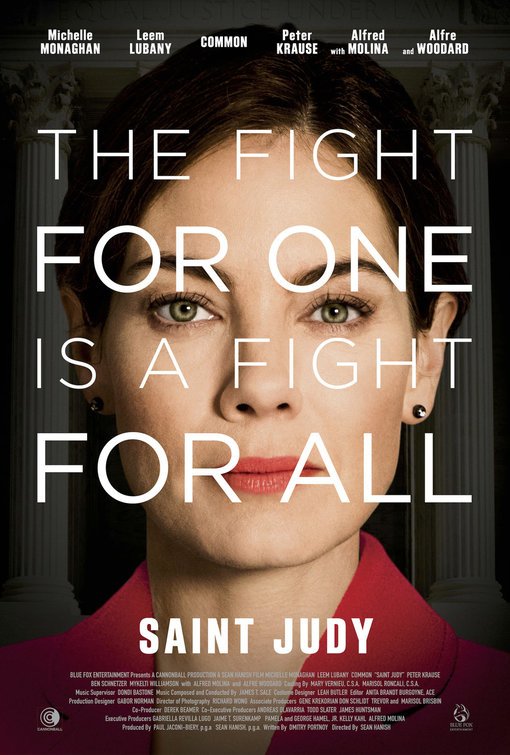 SAINT JUDY stars Michelle Monaghan as Judy Wood, a real immigration lawyer who puts clients before her paycheck. The movie deals with her first case, which set a legal precedent. Judy takes the case of a female Afghani immigrant who’s being detained in Southern California at a federal facility. After opposing the local Taliban government’s oppressive rules for women in Afghanistan, Asefa Ashwari is arrested, beaten and raped in jail. Eventually, she escapes to the United States. Judy fights for Asefa’s right to obtain asylum in the United States, and her case eventually goes to the Ninth Circuit Court of Appeals.

SAINT JUDY is highly entertaining with appealing performances. The story and characters are compelling and contain morally uplifting elements. That said, SAINT JUDY takes a somewhat humanist, anti-religious, politically correct approach to its subject and the issues involved. Happily, SAINT JUDY avoids showing the physical and sexual abuse inflicted on Asefa and her uncle. It does, however, mention them. SAINT JUDY also contains brief gratuitous foul language, which includes three “f” words and two strong Jesus profanities. So, extreme caution is advised.

(HH, FeFe, PCPC, B, Ab, C, LL, V, S, A, MM)
Dominant Worldview and Other Worldview Content/Elements:
Strong humanist worldview with strong feminist elements and strong politically correct elements interspersed through the narrative seeming to promote a godless utopian worldview of people and of justice but mixed with some solid moral elements where female lawyer for immigrants legal and illegal fights for the “oppressed” and for “human rights” and represents a persecuted rape victim of a local Taliban government in Afghanistan, and it turns out the rape victim would be a possible “honor” murder victim by her father and brothers if she returned to her country, but lawyer falsely says the Taliban have a “twisted version of Islam” and tells appeals judges that the United States should accept all persecuted women around the world as legal immigrants and movie eliminates “so help me God” from trial oath and implies in a couple similar scenes that all political uses of religion are wrong, hence the movie’s humanist slant re religion, plus an image of a mural with the Virgin Mary;
Foul Language:
11 obscenities (including three “f” words) and two strong Jesus profanities
Violence:
Women and girls hit with hard clods of dirt or clay, men drag distraught woman away and up some stairs to a jail cell, implied beatings and rapes, mentions of implied beatings and rapes afterwards;
Sex:
References to multiple rapes in jail of a woman and a man;
Nudity:
No nudity;
Alcohol Use:
Implied alcohol use;
Smoking and/or Drug Use and Abuse:
No smoking, mention of using medication to sedate an unruly immigration detainee who’s said to be a danger to herself;
Miscellaneous Immorality:
Strong miscellaneous immorality such as lying, stealing, greed, racism, sexism, destruction of public property, child rebellion, and family in movie is divorced, and there’s some tension and disagreement between divorced couple in one scene.

Based on a true story, SAINT JUDY stars Michelle Monaghan as Judy Wood, a divorced trial lawyer who moves from New Mexico to Los Angeles because her ex-husband has shared custody of their son, Alex. She begins a new career as an immigration lawyer in a medium-sized law firm and takes on the case of Asefa Ashwari, who’s been heavily medicated in a federal detention facility, where she’s been held for a year. Arrested by the Taliban in Afghanistan for starting a school for girls, Asefa was thrown into jail, beaten and raped. When she recovered, a friend smuggled her over the border to Pakistan so she could receive treatment and escape to America, where her uncle also is trying to claim asylum for himself.

Because of Judy’s tenacity in helping Asefa, immigration authorities recommend Asefa’s case to go to trial, and she gets out on bail as a result. To be granted asylum in the United States, Judy has to prove Asefa is part of a protected group. Although Asefa was assaulted at the hands of government officials, it isn’t enough for her to be granted asylum. After the trial, Asefa’s brother Omar admits he too was raped. Realizing Asefa wasn’t raped for being a woman but rather for her outspoken beliefs against the government and its policies, Judy appeals Asefa’s case.

SAINT JUDY is highly entertaining, with an appealing performance by Michelle Monaghan as the real-life immigration lawyer. The movie tells a gripping story about a strong, independent woman willing to overcome obstacles to become an advocate for people who don’t have a voice and to achieve justice for the oppressed. Her role as a mother adds to her character and several touching scenes between Judy and her son softens her overall tough exterior, though her ex-husband accuses her of not spending enough time with their son.

SAINT JUDY also sends the message that even one person can make a difference if they stand up for what is right. Written in a similar fashion to ERIN BROCKOVICH, SAINT JUDY also sheds light on the immigration process in the United States, its vastness and how many people can slip through the cracks.

Judy values her clients above dollars and realizes there’s more to Asefa’s story than meets the eye. After discovering she was a teacher in Afghanistan, Judy fights for Asefa’s rights as well as every other client who needs an advocate to tell their stories. Because of her compassionate nature, this earns her the nickname “Saint Judy” because she tries to rescue the oppressed and stand up for justice in the face of adversity. Her ex-husband gives the label an ironic twist. He tells Judy they only call her Saint Judy because of the self-righteous way she lawyers. You want your clients to save you, he adds.

The movie tells Asefa’s story in Afghanistan in brief, concise flashbacks. This adds to the movie’s overall artistic value. Also, the filmmakers’ choice not to depict the actual violence and sexual assault from Asefa’s testimony at her trial is all the more powerful and adds to the movie’s entertaining and inspiring aspects. It was also good to see that the movie clearly shows the Taliban in Afghanistan as the bad guys. The movie also makes a statement against the so-called “honor killings” in Afghanistan and other Muslim areas in the Middle East and Central Asia.

That said, SAINT JUDY takes a somewhat humanist, anti-religious, politically correct approach to its subject and the issues involved. For example, when Asefa is sworn in twice during her first trial, the movie eliminates the phrase “so help me God” from the swearing in event. Also, in talking about the Taliban, the movie repeats the phrase “crimes against God” about three times. In reality, of course, the Taliban, and other oppressive Muslim groups and governments around the world, actually would use the phrase “crimes against Allah.” By using the word God instead of Allah, the movie implicitly takes the humanist position against all invocations of God in legal and governmental activities. According to the U.S. Declaration of Independence, all rights originate from God, including whatever rights asylum seekers might have. In saying this, the Declaration is not referring to Allah, much less Islam.

At another point in the movie, Judy falsely tells the appeals court judges in the Ninth Circuit that the Taliban practice a “twisted version of Islam.” This, of course, is not really true. The Taliban may indeed go overboard in how they practice the principles of the Qur’an and Shariah Law, but, in general, the way they practice is actually what the Qur’an and the other holy writings in Islam preach. During the end credits, the movie shows a protest sign saying, “No Muslim Ban,” which is a false leftist distortion of Pres. Trump’s policy of preventing people from certain terrorist countries overseas from traveling to the United States.

In addition, at one point during SAINT JUDY, an appeals court judge asks Judy if the United States should give amnesty to all women around the world who suffer persecution overseas, whether by their government or not. She emphatically answers, “We should!” Since earlier in the movie, Judy makes a statement that two-thirds of the women overseas are oppressed, her comment smacks of being a politically correct, virtually unattainable utopian position that violates the Rule of Law as it’s been understood by the best legal scholars over the decades and centuries. Such a position seems to confirm what opponents of immigration activists like Judy Wood often say, that these activists are promoting nothing but a radical position. This seems to be what the filmmakers behind SAINT JUDY are indeed promoting themselves. The movie makes no mention of the service that America’s immigration system should also provide to legal American citizens and the Rule of Law. The movie repeats the canard that “America is a nation of immigrants,” but, as constitutional scholar Mark Levin often notes, America is actually a nation of citizens.

As noted above, SAINT JUDY avoids showing the physical and sexual abuse inflicted on Asefa and her uncle. It does, however, mention them. There’s also a harrowing scene where Taliban police drag a distraught Asefa to her jail cell and enter it.