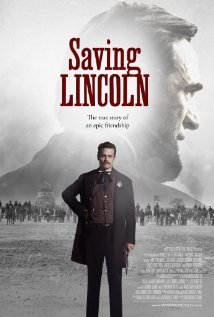 SAVING LINCOLN is a unique low budget movie about President Lincoln and the Civil War. Shot on a soundstage, the performances are inserted into blown-up still photographs from the period. The story of SAVING LINCOLN focuses on Lincoln’s friendship with Ward Hill Lamon, who became Lincoln’s personal guard. It follows the two men as Lincoln deals with military problems, the death of his youngest son, the Emancipation Proclamation, the Battle of Gettysburg, and the ravages of war.

SAVING LINCOLN is sometimes very dramatic. Especially when it focuses on Lamon’s concerns for Lincoln’s safety. Or, Lincoln’s distress over the high casualty lists as the Civil War continues. A scene between Lincoln and a former slavewoman is particularly good. The woman powerfully assures Lincoln that God has chosen him to lead the fight to end slavery. Despite these scenes, SAVING LINCOLN comes across a little stagey. However, the worldview is very moral and patriotic, with more positive references to God than Steven Spielberg’s recently acclaimed movie on Lincoln. Caution is advised for pre-teen children due to some war photos and a military hospital scene.

(BBB, PPP, CC, OO, RH, L, V, N, AA, M) Very strong moral, Pro-American, patriotic worldview with strong Christian, redemptive references to God and to mercy, plus some occult content when president Lincoln’s wife gets him to attend a séance to get in touch with their dead son but Lincoln dresses down the medium when she tries to tell him that the dead soldiers in Heaven are happy about being there because of the “great cause” Lincoln is doing against slavery and some possible revisionist history as one main character, a friend of Lincoln, opposed slavery but also hated the abolitionists and movie doesn’t really mention that hatred; one or two “h” words and five very light profanities, including one MG but several Dear God exclamations that also seem very reverent reactions/appeals to God concerning the ravages of war; some black and white Civil War photos of dead bodies, including one of a man’s head covered in blood, but nothing gruesome, plus sounds of gunfire and cannon fire, John Wilkes Booth is dragged away from Lincoln’s Second Inaugural address, and Lincoln visits hospital where man has lost one arm and his screams are heard but not shown as doctors start to amputate the other; no sex; no nudity; some alcohol use and drunkenness; brief cigar smoking; and, Booth plots to kidnap, then assassinate the president, and men want to kill man because they think he was derelict in his duty but he was not.

SAVING LINCOLN is a unique low budget movie about President Lincoln and the Civil War. It was shot on a stage and the actors performances inserted into blown-up still photographs from the period in question. For example, the actor playing Lincoln performs the Second Inaugural address and the Gettysburg Address against backdrops of some photos taken at the time. The technique is more interesting and dramatic than it sounds, though still a little stilted in execution.

The movie focuses on Lincoln’s friendship with his law partner in Illinois, Ward Hill Lamon (their practice together started in 1852). The movie’s opening details their first meeting in a saloon. Soon, Lincoln is running against Stephen Douglas for the Senate, but he loses. Then, of course, in 1860, Lincoln wins the presidency.

Lamon wants to be ambassador to France, but Lincoln wants his help in Washington. Concerned about Lincoln’s safety, Lamon becomes Lincoln’s self-appointed security guard, and Lincoln makes him U.S. Marshal of Washington, D.C. The rest of the movie follows the two men as Lincoln deals with the military problems in the Civil War, the death of his youngest son, the Emancipation Proclamation, the Battle of Gettysburg, and the ravages of war.

SAVING LINCOLN is particularly good when it shows the concerns Lamon had for Lincoln’s safety, or the despair Lincoln faces when he hears the tremendous casualty figures from the front lines. The Second Inaugural and Gettysburg Address are also high points. Sometimes, the photographic backdrops add a unique sense of reality to the drama. Other times, however, they’re a little annoying and off-putting. Also, the acting in the beginning is a bit exaggerated and unbelievable.

That said, SAVING LINCOLN has a strong moral, anti-slavery worldview with strong references to God and Christian virtues of mercy. One very moving scene shows a former slave woman comforting Lincoln after his son Willie’s death. She tells him that God has chosen him to lead the fight to end slavery.

SAVING LINCOLN is only for older children, because of some black and white Civil War photos of dead soldiers, including one photo of a soldier with a bloodied face. There’s also a scene in a hospital where Lincoln witnesses an arm amputation that occurs off screen. Nothing is shown of this, but the man’s screams are audible. SAVING LINCOLN also has a scene where President Lincoln’s wife drags him into a séance to get in touch with their dead son, Willie. However, Lincoln dresses down the medium leading the séance when she says the dead soldiers are happy they’ve gone to Heaven because the President is leading such a good cause. Lincoln has seen the extremely high casualty lists, and he doesn’t like her superficial message to him about it, especially since he’s very suspicious of what she does in the first place.

Overall, SAVING LINCOLN fills in some of the gaps about Lincoln’s presidency that weren’t discussed in the recent acclaimed movie by Steven Spielberg. For that, it’s worth seeing.

Distributor: Pictures from the Fringe