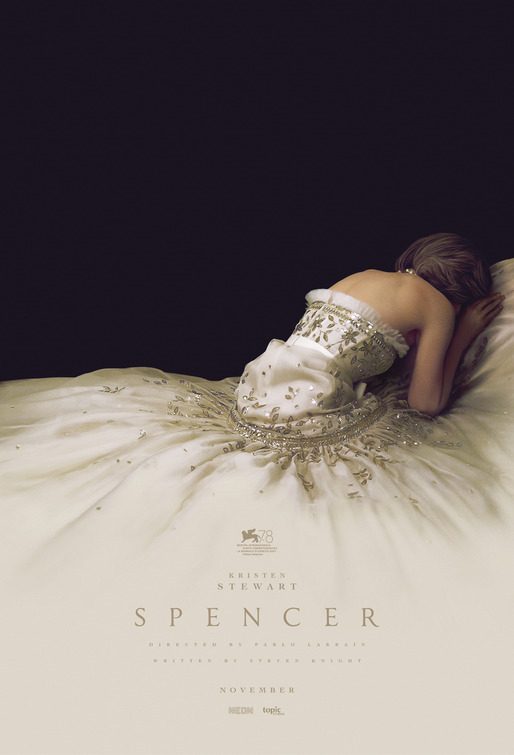 SPENCER is an arthouse drama depicting the life of the late Princess Diana during Christmastime at the royal family’s Sandringahm estate in 1991. This occurs just before she presumably escapes life with the royals, and divorces Prince Charles. The royal family members are depicted as stoic and cold, but there are some very touching moments where Diana interacts with her children, which emote a strong sense of motherhood and love. However, Diana’s shortcomings and struggles are showcased in one long weekend of festivities. Diana’s struggles include her battle with mental illness, bulimia, self-harm, loneliness, and her husband’s not-so-hidden infidelity.

SPENCER hangs on Diana’s negative emotions using dreamlike sequences and hallucinations, but it misses the mark on the circumstances to which she may be reacting. Even the manner in which she escapes with her children is depraved and depressed. SPENCER has some realistic cinematography and an appropriate musical score. The movie’s depiction of Diana seems incomplete and sometimes flat. SPENCER also contains about half a dozen “f” words, a self-harming scene, thoughts of suicide, and repeated scenes of mental health issues. So, MOVIEGUIDE® advises extreme caution for SPENCER.

(RoRo, B, C, Ho, LL, S, N, V, A, D, M):
Dominant Worldview and Other Worldview Content/Elements:
Strong Romantic worldview about one weekend in the life of the late Princess Diana of Great Britain portrays Diana as a victim of her circumstances, which includes stifling human traditions and an unfaithful husband, there’s an emphasis on the importance of Diana’s love for her children and her longing for fidelity from her husband, who’s seeing a long-term lover who’s also married, the weekend is set during Christmas time, plus the dresser of Princess Diana admits she’s in love with Diana, though the feeling isn’t mutual
Foul Language:
Seven obscenities (including five “f” words) and three light profanities, plus bulimic young woman goes to bathroom to purge herself periodically of food she’s just eaten
Violence:
Title character harms herself by cutting her arm, has bulimia and suffers from suicidal ideations
Sex:
A reference to self-abuse, verbal references to adultery, and Prince is cheating on his wife with another woman, who’s still married though her own husband fools around as well
Nudity:
Partial upper female nudity from two or more images from behind, plus woman in panties and some female cleavage, but not sexual
Alcohol Use:
Casual drinking at dinner
Smoking and/or Drug Use and Abuse:
Brief smoking but no drugs;
Miscellaneous Immorality:
Strong miscellaneous immorality overall includes rebellion, dysfunctional family portrayal, harsh judgments, and husband shows no concern for his wife’s pain.

SPENCER is an arthouse drama of a snippet in the life of the late Princess Diana at Christmastime just before she presumably escapes a prison-like life with the royals, and divorces Prince Charles. The royal family members are depicted as stoic and cold, but there are some very touching moments where Diana interacts with her children which emotes a strong sense of motherhood and love. The movie hangs on Diana’s negative emotions using dream-like sequences and delusions, but it misses the mark on the circumstances to which she may be reacting. Even the manner in which she escapes with her children is depraved and depressed, like the movie’s depiction of Diana Spencer. There are about a half dozen “f” words, self-harm through cutting, and several scenes which include bulimia and obsession with her size, all of which warrant extreme caution.

SPENCER takes place over a typical, tradition-filled four-day Christmas Holiday at Sandringham estate in 1991. Princess Diana does the unthinkable and drives herself to the family gathering. She gets lost on the way. Meanwhile, the rest of the royals who earlier had chauffeured to the event impatiently await her arrival.

Diana is met at the door by a very stern new Head of Staff, Major Alistar Gregory. Gregory watches and scrutinizes every move the Princess makes, often violating her privacy. Diana resists by non-compliance with carefully kept royal traditions. She refuses to wear outfits meticulously designed and organized by her dressers. Diana confides in the only friend she has, a dresser named Maggie. Maggie is soon reassigned to another royal position.

Battling an eating disorder, Diana regularly leaves dinner gatherings to purge. Her greatest pain seems to be, though not well-defined, Prince Charles’s neglect and extramarital affair with Camilla Parker Bowles, the daughter of an upper class British Army officer-turned-businessman. Diana discovers that her husband Charles has gifted her with a string of pearls that are identical to a gift he gave Camilla. The pearl necklace becomes a metaphor for her struggle to be free from her cage.

In a type of destructive fantasy form, Diana imagines ripping the pearls from her neck during a Christmas dinner where she sits across from her husband. The pearls fall into her soup where she eats them and painfully crushes them between her teeth. The audience realizes it is an hallucination because in the next sequence shows her running to the restroom to purge with the pearls still placed around her neck. Diana struggles with other symptoms of poor mental health, including seeing visions of Anne Boleyn, who was beheaded by King Henry VIII. The visions are intended to be a foreshadowing of Diana’s future.

Though forbidden to go to her childhood home, which abuts the Sandringham estate, Diana goes anyway. Standing at the edge of a steep staircase, about to jump off, she imagines herself dancing from childhood to the present, again in a dreamlike hallucination. Though this sequence showcases the best and most beloved fashion outfit memories of Princess Diana through the years, including her famous wedding dress, the scene is fragmented and corny. Nevertheless, this experience leads Diana to find the strength deep inside herself to take, together with her children, a stand against the life that the royals have imposed on her and leave Charles for good.

SPENCER is a haunting but miserable account of the life of Princess Diana. It seems to shove all of Diana’s known struggles into one weekend. The movie depicts nothing of Diana’s known accomplishments of overcoming her eating disorder and self-harm behavior. Diana championed many charities and causes in her lifetime, which included advocating for those who struggle with mental health issues.

That said, the movie has some very interesting 1980s and 1990s era cinematography that adds some realism to the movie. Also, the musical score does a great job reinforcing the movie’s themes, even though they’re chaotic and bleak. The one thing the movie seems to depict accurately is Diana’s love and dedication for her children. Sadly, Kristen Stewart’s performance as Diana lacks her charisma and seems rather flat to MOVIEGUIDE®. Ultimately, this dark depiction of Princess Diana seems a bit incomplete. SPENCER also contains about half a dozen “f” words, self-harming scene which involves cutting, and repeated scenes of bulimia and mental health related issues. So, MOVIEGUIDE® advises extreme caution for SPENCER.