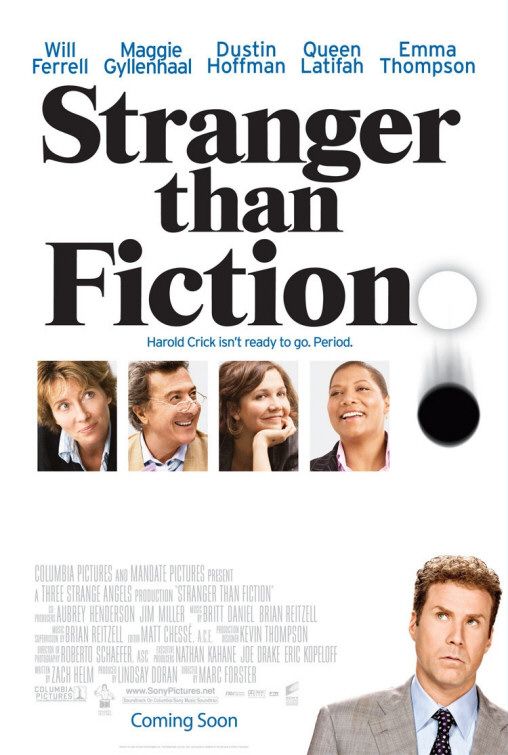 STRANGER THAN FICTION stars Will Ferrell in his most appealing comic performance to date. Ferrell plays Harold Crick, a shy tax auditor for the Internal Revenue Service. Harold begins to hear a female voice narrating his every move and thought in an alarmingly accurate way. When the narrator mentions Harold's upcoming "imminent death," he goes on a desperate journey to find out what's happening and save his life. During the process, he learns some important lessons about life, death, true love, and taxes. Emma Thompson, Dustin Hoffman, and Queen Latifah star in this morally uplifting fable.

The story, cast and characters shine in this movie, in spite of some worldview and pacing problems. STRANGER THAN FICTION is a delightful comic fantasy that leaves one guessing where it is going, but ends up providing viewers a morally uplifting ending that extols sacrifice for others and briefly, but strongly, suggests that we should be grateful to God for the positive things in our lives, like human kindness, parental love, and cookies. These positive qualities are mitigated by some Romantic pagan content, brief foul language and implied pre-marital sex, so caution is advised.

(BB, C, Ro, Pa, FR, PC, AP, Acap, LL, V, S, N, D, M) Strong, ultimately moral worldview with some Christian, redemptive aspects, including a positive admonition to thank God, mitigated by some Romantic pagan antinomian elements of seeking pleasure with no moral restraints and a love interest who's a hippie and a Bohemian and who makes a politically correct, anti-capitalist comment at one point about withholding some of her federal taxes because she doesn't want to pay for defense spending and “corporate bailouts”; nine obscenities (including one “f” word), three strong profanities, eight light profanities, and protagonist watches scene of man vomiting in comedy movie, MONTY PYTHON’S THE MEANING OF LIFE; brief violence includes car plunges off bridge when it swerves to avoid boy on bicycle, large shovel on crane suddenly bursts through man’s living room wall and pedestrian hit by bus; implied fornication, passionate kissing and unmarried couple lies in bed; rear and upper male nudity of men in locker room shower and partial upper male nudity as man lies awake in bed; no alcohol use; smoking; and, a modernist attitude is expressed a couple times where it is implied art matters more than human life.

STRANGER THAN FICTION is a delightful comic fantasy that leaves you guessing where it is going, but ends up granting viewers a brief, but insightful, revelation about God. This revelation comes as a pleasant surprise, especially since the movie also has some morally uplifting things to say in its whimsical, uplifting climax.

The movie opens with a female voice describing the dull, compulsive routine of Harold Crick, a shy and withdrawn tax auditor for the Internal Revenue Service, played by Will Ferrell. Suddenly, Harold begins to hear the woman’s voice narrating his every action, thought and feeling in precise and alarmingly accurate detail. He tries to get her to stop, but she apparently can’t hear him.

When the female narrator happens to mention Harold’s upcoming “imminent death,” Harold decides to consult a psychiatrist. The psychiatrist tells Harold that he has schizophrenia and advises him to get medication. Harold, however, is adamant that he is NOT a schizophrenic. He asks the psychiatrist what she would do if the voice in his head were real. She advises Harold that, in that case, she would probably consult an expert in literature.

Harold finds literature professor Jules Hilbert, played wonderfully by Dustin Hoffman. Hilbert asks Harold all sorts of questions about his life to determine what kind of story the narrator in his head is telling. When Hilbert learns that Harold has had a run-in with an attractive, free-spirited baker named Anna (played by Maggie Gyllenhaal [“Jill-in-Hall”]) whom he is auditing, Hilbert tells Harold that the narrator could be writing a comedy, where Harold will not, and cannot, die. He advises Harold to pursue a romance with Anna.

Harold follows this advice. When his pursuit of Anna doesn’t go so well, Harold begins to think he’s in a tragedy. Eventually, however, things begin to turn around for Harold, and he begins to experience true love for the first time in his dull, withdrawn existence.

Then, however, Harold and Professor Hilbert discover that the narrator in Harold’s mind is none other than the brilliant but reclusive and dour novelist, Karen Eiffel (played by Emma Thompson). Karen kills off every protagonist in her celebrated novels just when the character has the most to live for. As Divine Providence would have it, however, Karen is having trouble deciding how to kill off Harold. Harold must find a way to stop her before she does find a way so that he can enjoy his newfound life.

STRANGER THAN FICTION is very well made, enough so that it may grow on you the more you think about it after you see it. It’s not a laugh riot, so some Will Ferrell fans may be a little disappointed. That said, the characters, story, acting, and direction are appealing and funny in a whimsical way that grabs your heart and stimulates your mind. Admittedly, the pace could be picked up, but that problem may be due to the fact that the movie doesn’t quite know where it’s going until the end.

For example, as Harold discovers his new life and love, the movie seems to take a Romantic pagan turn where Harold begins to pursue personal dreams and pleasures. In fact, Harold eventually has pre-marital sex with Anna, which, along with the movie’s negative worldview elements and foul language, requires a caution for older children (the movie is made for older teenagers and adults).

The final third of the movie picks up, however, when Harold goes in pursuit of the whereabouts of the author in his head, Karen. At that point, the movie veers decidedly into a morally uplifting fable of life, death, ethical choices, sacrifice, compassion, human kindness, parental love, and taxes.

Then, at the very end, the movie wraps everything up in a neat, morally uplifting bow that also invokes God. Sacrifice for others is extolled and the movie briefly, but strongly, suggests that we should be grateful to God for all the positive things in our lives, like human kindness, parental love, sacrifice for others, and cookies. To that little, but crucial, piece of divine wisdom, the people of God can add, “Amen.”

MOVIEGUIDE® praises the positive elements in STRANGER THAN FICTION, but the movie could have been even stronger if the negative elements were reduced or eliminated. Also, the movie’s premise at the end could be strengthened if there were more positive references to God, or even Jesus Christ, in the beginning and the middle as well as the end. The filmmakers could have built such references slowly in the beginning, then more strongly as the movie reaches its climax. Christian filmmakers should consider making such a movie like this in this genre. The kind of morally uplifting, almost spiritual subtlety that STRANGER THAN FICTION achieves in its ending is a lesson that they, and other artists, would do well to learn.

Rent or Buy STRANGER THAN FICTION: