"A Skeptic, a Politician, a Fisherman" 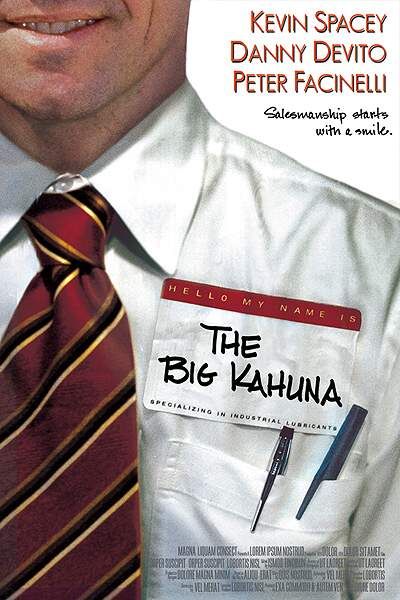 THE BIG KAHUNA, though not glamorous in its setting, is a deep look inside the worldviews of three salesmen. A self-proclaimed Christian, Bob is newly married and ready to make his way in the world. Larry is set on doing business and living life until it’s done, while Phil holds a politically correct view of God. Bob faces some verbal attacks and is portrayed as naïve, but is morally grounded strong witness for Christ. He is rebuked not for what he believes, but for his inability to see that other things are important to some people. Phil comes across as a mediator, though his faith is unclear. Larry does open up some when Phil presses him about God, agreeing that, yes, he thinks about Him sometimes.

Containing no sex or nudity, this movie is rated R for language. Regrettably, this takes away from the otherwise in-depth look of an everyday situation and the influence Jesus Christ has on society today. Though not a positively moral movie, THE BIG KAHUNA does not present a warped, weak Christian character, but cites Scripture and represents all of its characters in a somewhat dark but real, and often funny, story

(PaPa, CCC, PcPc, BB, LLL, V, A, D) A mixed, eclectic Pagan worldview where each character represents a different point of view, with very strong Christian & politically correct elements from other characters plus some moral elements; 23 strong obscenities, 7 mild obscenities & 16 profanities; mild violence including man yelling at others & brief struggle between characters; no sex but brief talk of women in business suits; no nudity; alcohol use; and, smoking.

Every salesperson knows that you have to persuade THE BIG KAHUNA in order to get the big account. In this movie, most of the drama is played out in a single room at a hotel where three salesmen are attending a convention. Their conversation spans everything from explaining the ropes of sales to: the new guy, God, the Bible, self image, life, and, themselves.

Recent Academy Award winner Kevin Spacey stars as Larry, a driven sales representative who arrives in Wichita to meet his co-workers, Phil and Bob, for a convention. Phil is in the room, reading an issue of Penthouse, and asks Bob if he wants to read it when he’s done. Bob says no, then asks Phil why he reads that stuff and what his wife thinks about it. Phil explains that his wife doesn’t care and that they are getting divorced soon, then asks, “Why, you don’t believe you should read these?” Bob simply replies, “No, I don’t believe they should be purchased.”

Upon Larry’s arrival, he is furious at the room where they will meet – a regular hotel room. He vents his frustration by being sarcastic and blunt with Phil and Bob. Phil, still reading his magazine, is used to Larry’s demeanor and tries to justify his preparations in between Larry’s comments. Larry then turns his attention to Bob, a young man just getting started in the field and very forthright about his beliefs. Bob tells Larry that he is Baptist, and Larry further questions his standards on various issues. Bob, though obviously shaken and surprised by this, stands his ground.

During the convention, Larry nervously paces the floor, looking for the ‘Big Kahuna’, the man with whom they want to obtain the major account. After the convention, the three discuss the convention, and Larry tells them how much of a waste it was when the guy they wanted didn’t even show up. It turns out, however, that Bob ended up talking to him unknowingly. Larry and Phil press him for information, wanting to know what they discussed, and Bob tells them, “mostly his dog that just died.” He also tells them that they discussed God and Jesus. Larry is furious, thinking of business, while Phil understands that Bob didn’t know.

Bob is invited to a party by the ‘Big Kahuna’, and so Larry and Phil send him there to talk and to do business. During this time, Larry and Phil discuss God, and Phil even recites John 15:13, and asks Larry if he would lay down his life for him. Larry responds with a blunt answer, that he wouldn’t, not surprising Phil.

Bob then returns from the party not having talked business at all, just more about God. He defends himself, saying he did not want to sound impersonal and insincere, that Jesus was more important to him than getting an account. This infuriates Larry, and the two get into a struggle, with Larry leaving upset. Phil then talks to Bob about life and explores the meaning of character, and there is somewhat of a resolution.

Eventually, the movie ends abruptly, leaving viewers with one of three possibilities: that the movie is trying either to provoke the audience to think about the story and its worldviews in regard to their own lives, or to think of the movie as ‘unfinished’, or to consider it as a profound thought-provoking struggle between extreme views.

THE BIG KAHUNA, though not glamorous by any means in its setting or situation, is a deep, talkative movie that stimulates thinking among people of various beliefs. The character of Bob, a newly married, young Baptist businessman ready to make his way in the world holds a totally different viewpoint than that of Larry, a man set on doing business and living life until it’s done. Their worldviews contrast greatly with Phil, a man struggling with some things in his life and who holds a mostly politically correct worldview of God. Despite the verbal attacks that Bob faces, he is portrayed as naïve, yet morally grounded. He is rebuked not for what he believes, or how he presents it, but for his inability to see that other things are important to some people. Phil comes across as the mediator, though holding an abstract and a ‘can’t we all just get along’ attitude when it comes to his faith. Larry, meanwhile, does open up some when Phil presses him about God, agreeing that, yes, he does think about him sometimes.

Containing no sex or nudity, this movie is rated R for language, including plenty of lewd talk. Regrettably, this takes away from the otherwise in-depth look of an everyday situation and the influence Jesus Christ has on society today. Though not a positively moral movie, THE BIG KAHUNA does not present a warped, weak Christian character, but represents all of its characters in a somewhat dark but real, and often funny, story.