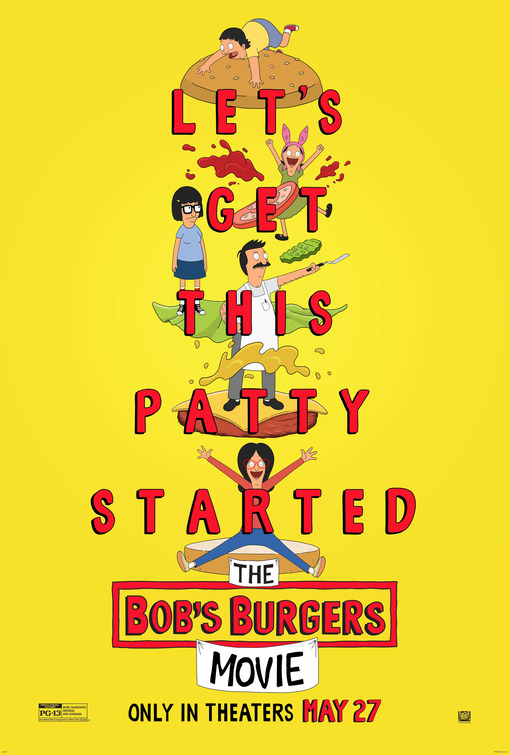 THE BOB’S BURGERS MOVIE is a feature adaptation of Fox-TV’s animated comedy series BOB’S BURGERS. The movie and show focus on the Belcher family, which consists of Bob, his wife Linda, and their three children, Tina, Gene and Louise. The family may lose their restaurant because they owe the bank money. Their situation becomes more complicated when a sinkhole forms in front of their restaurant. Unable to get customers, Bob loses hope. However, when Louise discovers a dead body at the bottom of the sinkhole, the children embark on a mission to solve the mystery and save the family restaurant.

THE BOB’S BURGERS MOVIE contains many of the TV program’s same elements. It has several musical numbers, slapstick comedy and some edgy adult jokes. However, it stresses the importance of family where the Belchers learn to love one another despite their faults. Also, the movie has strong pro-capitalist elements. Sadly, these messages struggle to lift THE BOB’S BURGERS MOVIE above its poor pacing and comedy cliches. MOVIEGUIDE® advises strong and extreme caution because of the movie’s edgier jokes, alcohol consumption and foul language.

(BB, CapCap, Pa, LL, VV, S, A, M):
Dominant Worldview and Other Worldview Content/Elements:
Strong moral worldview about the importance of family, plus some pro-marriage elements where Linda encourages Bob and Bob realizes that he needs to do the same for Linda, with some strong pro-capitalist elements, mitigated by some pagan content and behavior
Foul Language:
Eleven profanities (including OMG, GD and Jesus). Several light obscenities such as “a**,” “bada**” and “crap,” and some bathroom humor
Violence:
The story revolves around a murder, so there’s some cartoon violence, but it isn’t graphic or bloody, and there are also some scenes of peril
Sex:
No sex scenes, but there are some raunchy jokes
Nudity:
No nudity Alcohol Use/Abuse: Several scenes involving alcohol
Smoking and/or Drug Use and Abuse:
No smoking or drugs; and,
Miscellaneous Immorality:
It’s clear that a group of people are rough around the edges and have spent time in prison.

THE BOB’S BURGERS MOVIE is a feature length adaptation of Fox-TV’s animated comedy series BOB’S BURGERS, where the Belcher family is thrust into a murder mystery when a sinkhole forms in front of their family restaurant. THE BOB’S BURGERS MOVIE has some positive moral, pro-family, pro-capitalist elements, but it’s paced poorly and contains some adult humor, bathroom jokes, alcohol use, and foul language, so MOVIEGUIDE® advises strong and extreme caution.

The movie starts with Bob and Linda Belcher opening their restaurant for the day. As they send their three children, Tina, Gene and Louise, to school, Bob is nervous about their visit to the bank later that day.

Despite making a special burger to appease the bank, they’re unable to get a loan and realize they could lose everything they’ve worked so hard to achieve. While Bob despairs, Linda tries to stay positive. After all, they’re entering the summer season, where business will be booming.

However, a sinkhole forms in front of the restaurant that forces the city to block off all but one entrance to Bob and Linda’s restaurant. Bob sees this as another sign that his dream of running a burger shop could be coming to an end.

Meanwhile, Tina, Gene and Louise are excited to finally finish out the school year. However, Louise is bullied by her fellow classmates. For example, she’s called a baby for her size and for her pink hat that she refuses to remove. As an act of bravery to show the school, Louise has Tina and Gene film her going to the bottom of the sinkhole. While she’s is down there, she makes a shocking discovery and finds a skeleton of a pier worker.

The police are baffled as to who buried the body, but they are positive it is murder. Tina, Gene and Louise decide they can solve the mystery and in the process help their parents save the restaurant. The Belchers learn to rely on each other’s strengths and love one another despite their weaknesses.

THE BOB’S BURGERS MOVIE suffers from catering to a niche audience. While many of the larger comedic elements will only be funny to a 13-year-old, the more adult and raunchy jokes they use to try and attract older viewers will offend a younger crowd and their parents. As a result, the movie enters a middle ground where few are likely to enjoy the movie aside from fans of the TV program.

THE BOB’S BURGERS MOVIE contains many of the same comical elements and jokes. The movie has several musical numbers, slapstick comedy and some edgier adult jokes. There is a strong emphasis on the importance of family, and the Belchers learn to love one another despite their faults and shortcomings. Also, the movie has strong pro-capitalist elements. Sadly, these messages struggle to lift THE BOB’S BURGERS MOVIE above its poor pacing and comedy cliches. MOVIEGUIDE® advises strong and extreme caution because of the movie’s edgier jokes, alcohol consumption and foul language.