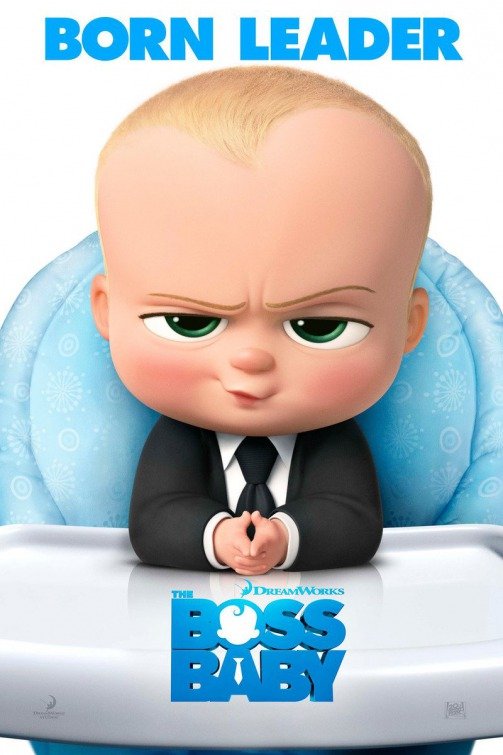 THE BOSS BABY is a delightful animated comedy. Seven-year-old Tim has the perfect life, until he gets a baby brother. Suddenly, the baby totally consumes his father and mother’s attention. One night, Tim hears talking from the baby’s room. He opens the door and sees the baby talking on the phone! Tim questions the baby, who tells Tim he’s on a mission from Heaven to stop the company where Tim’s parents work, the Puppy Company. The company is trying to make the best puppy ever so people will stop having babies. Tim must help the Boss Baby halt this horrible scheme to get his life back.

THE BOSS BABY is an hilarious, heartwarming movie with strong pro-life, pro-family, pro-business messages. The entire movie’s based on the premise of promoting people having babies instead of just buying puppies. As such, it has a strong Christian, moral worldview with positive references to Heaven, angels, Jesus, and sacrifice. There’s a lot of slapstick comedy, with characters hitting one another, but the story and animation are colorful and creative. BOSS BABY is a great movie for families.

(CCC, BBB, CapCapCap, Acap, L, V, N, M) Very strong Christian, moral worldview set in a cartoon, comical world with positive references to Heaven, angels, Jesus, prayer, sacrifice, and reconciliation (including movie features scenes set in a cartoon version of Heaven) and with very clear pro-life, pro-family messages and a very strong pro-capitalist, pro-business attitude but that promotes business supporting families instead of undermining them and against businessmen being too selfish, with one light anti-capitalist comment about the bad businessman not sharing; no obscenities, one light profanity, some scatological humor; lots of slapstick comedy, with the baby slapping his parents, the children slapping each other, images of babies flying through the air, images of babies being pushed, etc.; no sexual content; baby rear end shown and upper male nudity; no alcohol use; no smoking or drug use; and, one character is a big unintelligent man, who dresses up as a female nanny to disguise himself, and some other characters make fun of him.

THE BOSS BABY is a delightful, funny animated comedy. Seven-year-old Tim has a perfect life until he gets a baby brother and together they must stop a powerful, nefarious organization trying to replace cuddly babies with cuddly puppies. BOSS BABY is a hilarious, ultimately heartwarming movie with a strong Christian, moral worldview that’s pro-life, pro-family and pro-business.

As the movie opens, 7-year-old Tim has the best life. It’s just him and his parents, and they love each other dearly until Tim’s mother has a baby. Tim remembers the baby comes to the house in a taxi cab. The moment the baby steps out, Tim starts calling him the boss baby, because he’s wearing a suit and tie and carrying a briefcase.

One night Tim hears something coming from the baby’s room and finds the baby talking on the phone. His voice is a man’s voice, and he is talking about some plan. Interrupting, Tim questions the baby, and finally the boss baby tells Tim he is on a mission to stop the company where Tim’s parents work, the Puppy Company. Puppy Company is trying to make the best puppy ever so that people won’t have babies anymore and instead will just buy puppies. Also, Boss Baby reveals that he’s a boss, not an actual baby, at the baby corporation where babies are produced. He’s on this mission hoping he’ll get a promotion. Tim thinks this is just too bizarre and pushes Boss Baby way.

So, when Boss Baby and the other local babies have a meeting, Tim almost takes them down. At that moment, his parents ground Tim for the first time ever. Tim is completely crushed because he’s used to being his family’s center of attention, but now he’s locked up in his room.

Boss Baby feels bad about this turn of events. He tells Tim that, if Tim helps him on his mission, then he’ll leave the family forever, and things will go back to the way they were. Boss Baby’s offer to Tim is really appealing, so Tim agrees to help Boss Baby defeat the Puppy Company.

Based on a popular children’s book, THE BOSS BABY is an hilarious family movie with a strong pro-life, pro-family storyline. The animation and plot are very creative and show Tim’s imagination in a unique way. Even so, the movie uses a lot of dialogue just to explain its setup. Also, the filmmakers obviously are trying something funny by having an adult actor voice the title character, but Alec Baldwin is so recognizable as Alec Baldwin that some viewers may find it hard to get past Alec and his controversial life, not to mention his controversial politics.

That said, THE BOSS BABY is a delightful animated movie that deserves a look. It has a strong Christian, moral worldview with strong pro-life and pro-family messages. The entire movie is based on a premise promoting people having babies instead of just buying puppies. In addition, BOSS BABY features fun scenes set in Heaven, in a cartoonish but positive way. It includes positive references not only to Heaven, but also to angels, Jesus, prayer, sacrifice, and reconciliation. It also has a very pro-business attitude, though it guides and tempers that attitude toward supporting families instead of undermining them and against being too selfish.

THE BOSS BABY does contain a lot of slapstick humor, with the children hitting each other and the Boss Baby hitting Tim’s parents. Also, there are a few scatological jokes. Finally, one character dresses up as a woman to disguise himself as a nanny to control Tim and the Boss Baby, and some other characters tease him. So, MOVIEGUIDE® advises some minor, discretionary caution for very young children regarding THE BOSS BABY.