"The Legend Revisited Once Again" 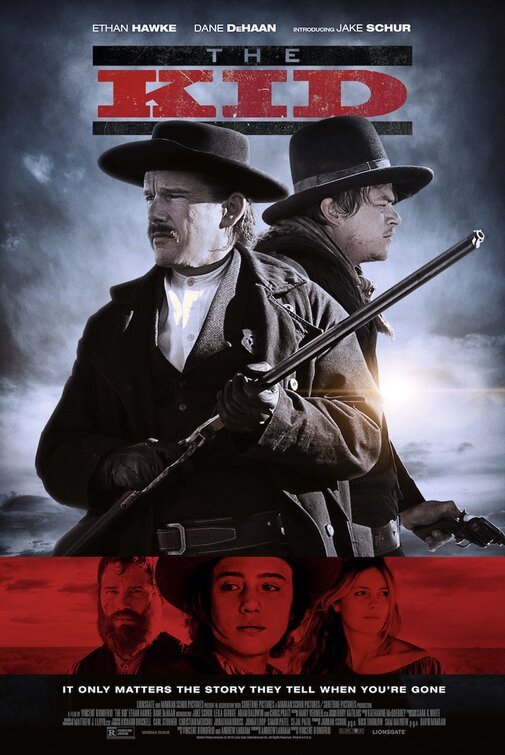 THE KID is a Western based on the real-life figures Pat Garrett and Billy the Kid. The movie follows two young teenage siblings, Rio and Sara, who are on the run from their violent Uncle Grant after Rio killed their father, Grant’s brother, in self-defense. Rio and Sara come across Billy the Kid, who’s on the run himself from Lawman Pat Garrett and subsequently captured. On their journey with Pat and Billy, Rio and Sarah must decide whom they can trust with their secret: the violent criminal Billy; or, the justice seeking Pat Garrett?

Many, many movies about Billy the Kid have been made over the past 100 years, and this 2019 movie doesn’t stand out as particularly unique. However, the fictional storyline of Rio and Sara is compelling enough, even though it drags a bit in the beginning. Near the end, the story changes directions in a positive way, making the ending more redemptive and moral. Along the way, however, there’s extreme violence and lots of strong foul language. Because of this, MOVIEGUIDE® advises extreme caution for THE KID.

(BB, CC, PP, LLL, VVV, S, N, A, D, M):
Dominant Worldview and Other Worldview Content/Elements:
Positive biblical worldview of defending your family, fighting in injustice, choosing lawfulness over lawlessness, with minor Christian references, such as a mention of prayer, a woman sings a hymn, and God is mentioned a few times, plus a sometimes rough, but ultimately positive portrayal of lawmen
Foul Language:
Nearly 30 obscenities (including many “f” words) and 12 profanities (including many GDs)
Violence:
Strong action violence, many people are shot (with bloody graphic detail), a man’s face is sliced, a horse is shot, a man violently beats his wife
Sex:
No depicted sex, but a woman is kidnapped to be a sex slave, characters walk into a brothel, and two characters kiss briefly
Nudity:
Upper male nudity, a woman’s back is seen as she covers herself with sheets on a bed
Alcohol Use:
Alcohol use in multiple scenes
Smoking and/or Drug Use and Abuse:
Character smokes a cigar; and,
Miscellaneous Immorality:
Stealing, revenge and a lawman oversteps his legal bounds at times.

THE KID is a Western based on the real-life figures Pat Garrett and Billy the Kid.

The movie opens in a New Mexico shack where a man is violently beating his wife. The teenage children, Rio and Sara, hide in the adjacent room, but at a certain point the young boy Rio decides to defend his mother. He picks up a gun and shoots his father in self-defense. When their dead father’s brother, Grant (played by Chris Pratt), shows up, he angrily attacks Rio and Sara, and they’re forced to flee.

On the run from their violent Uncle Grant, Rio and Sara cross paths with the notorious Billy the Kid and his crew, who are wanted for multiple murders. Billy shows kindness to the two runaways, and Rio especially finds solace in Billy’s demeanor. It’s not long, however, before a lawman, Pat Garrett (Ethan Hawke), finds and captures Billy and his crew. Rio and Sara hide from Garrett the fact that Rio killed their father, and fabricate a lie about being separated from their father. Pat agrees to take them to Santa Fe, New Mexico to help them before he hauls Billy the Kid to a town where he can stand trial and pay the penalty for his crimes.

Once they get to Santa Fe, however, their Uncle Grant finds them and takes Sara to be a sex slave for his men. Rio, now all alone, comes up with a last-ditch plan. If he helps Billy the Kid escape from jail and a guaranteed execution, maybe Billy will help him save his sister from his uncle. Will Rio’s plan work?

THE KID reunites Ethan Hawke, Chris Pratt and Vincent D’Onofrio who starred together in the 2017 remake of THE MAGNIFICENT SEVEN. D’Onofrio directs THE KID from a script he co-wrote. Somewhat disjointed, the movie lacks clear direction until the movie’s second half. Of course, many, many movies about Billy the Kid have been made, including THE LEFT HANDED GUN, THE OUTLAW, PAT GARRETT AND BILLY THE KID, and several others. Each rendition offers a new take on the western legend who’s become more folklore than history.

D’Onofrio’s THE KID doesn’t make Billy the central figure. Instead, it focuses on the perspective of the young Rio, who admires Billy. The performances from Ethan Hawke and Dane DeHaan as Garrett and Billy are terrific, though the wants and motivations for Billy aren’t always consistent or logical. Pratt creates a pretty loathsome villain as Grant, but his immaculately structured beard is comically unrealistic and serves as a major distraction.

Halfway through the movie, it seems as if the story is siding with a romanticized view of lawlessness as Rio tries to free Billy from the harsh lawman Pat Garrett. [SPOILERS FOLLOW] However, in the end Rio learns that Billy is just a selfish criminal, and he should’ve gone to Garrett for help from the beginning. Rio does go to Garrett eventually, and this leads to an unexpected heroic twist that completely changes the story’s moral trajectory, creating a redemptive conclusion.

That said, THE KID is very violent throughout, with over the top blood splatter and gruesome deaths. There’s also lots of strong profanities and obscenities, including many “f” bombs. Because of these elements, extreme caution is advised for THE KID.