"Deception Is a Fine Art" 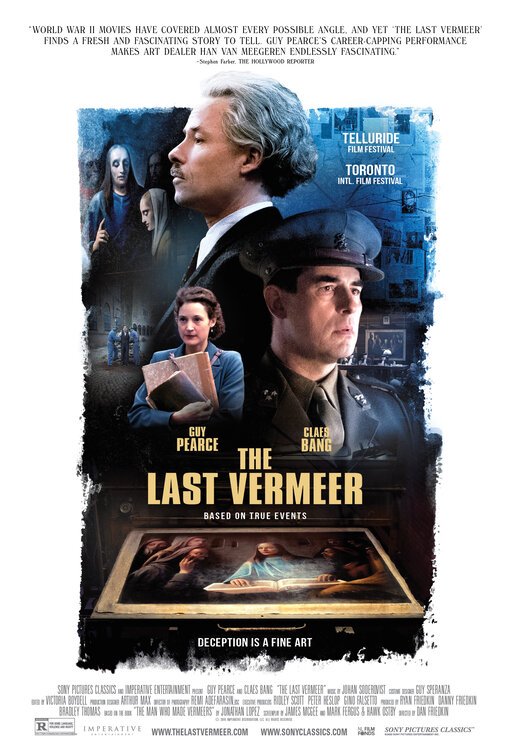 THE LAST VERMEER is a drama set in the Netherlands after World War II. An Allied captain named Joe Piller, who escaped the Netherlands when the Germans invaded, is rounding up German sympathizers. The Allied forces discover a valuable Vermeer painting, “Christ with the Adulteress,” in some stolen art. Joe’s investigation leads him to a Dutch art dealer and painter. Meanwhile, Joe has become estranged from his wife, because she slept with a German officer to gain information for the Resistance.

THE LAST VERMEER is a cleverly constructed, engrossing, provocative historical drama exploring moral issues related to the aftermath of World War II. As such, it has a strong moral worldview, but displays many vices, including excessive drinking, smoking, some foul language, and hedonism. At one point, the art dealer declares, “Marriage is an unnatural state,” referring to his own failed marriage, but the movie’s ending validates the importance of marriage. In contrast to the art dealer, Joe makes an effort to live clean and upright. THE LAST VERMEER contains brief foul language and nudity related to painting. MOVIEGUIDE® advises extreme caution.

BB, C, PaPa, L, VV, S, NN, AA, D, MM):
Dominant Worldview and Other Worldview Content/Elements:
Strong moral worldview with some Christian references and elements about truth and the nature of innocence and guilt, with some discussion about redemption, but a major character is a hedonist with a failed marriage who’s skeptical about that social institution and indulges several vices
Foul Language:
Five obscenities and one profanity
Violence:
Strong and light violence incudes roughing up, punching, some blood shown, two deaths by firing squad, and hero goes after a man who falsely accuses him of taking a bribe
Sex:
A Dutch man is separated from his wife during World War II, and she has slept with a German officer to gain information for the Resistance in the Netherlands, husband has trouble accepting this after the war ,and the couple separates, and the husband kisses his female assistant and sleeps at her place, but it’s implied they did nothing more than kiss
Nudity:
Full front female nudity in a realistic painting and rear female nudity both on canvas and of a woman sitting on a chaise lounge to model for a painter
Alcohol Use:
Heavy alcohol use throughout, but not condoned
Smoking and/or Drug Use and Abuse:
Smoking but no drugs; and,
Miscellaneous Immorality:
Infidelity, lying, greed.

THE LAST VERMEER features the true-life story of Dutch art dealer and painter, Han van Meegeren (Guy Pearce), after the end of World War II in the Netherlands. Captain “Joe” Piller (Claes Bang) has been tasked with rounding up any and all German sympathizers in the post-war aftermath. Any evidence of cooperation with and for the German occupation reaps a sentence ranging from mild (girls having their hair cut in the public square for sleeping with German soldiers) to fatal (death by firing squad).

The Allied forces discover a valuable Vermeer painting, “Christ with the Adulteress,” in a cache of recovered art. Joe’s investigation of the painting leads him to Han Van Meegeren, who reportedly sold the painting to Riechsmarschall Hermann Göring for 1.65 million guilders (US $7 million today). Göring and Hitler were trying to out-do each other with their art collections.

Joe arrests van Meegeren and remands him to Weteringschans prison hoping to garner a confession from him. Where did van Meegeren get the painting? Did he steal it from the Jews? Which rich family sold it to van Meegeren with hopes to escape the coming Nazi suppression? Van Meegeren asks Joe, “Captain, is it you who needs redemption?”

Meanwhile, Joe faces his own challenges at home. Being a Jew, Joe had to leave the Netherlands to fight elsewhere and escape being sent to a concentration camp. Meanwhile, Joe’s wife remained home and served as a spy for the Resistance. She was assigned to a German officer where she was able to retrieve valuable information for the war effort but had to earn his trust with intimacy. Joe struggles with the knowledge that his wife has been with another man, although it wasn’t her choice.

The Ministry of Justice tries to take van Meegeren from Joe’s jurisdiction by force. Joe sequesters van Meegeren in a hidden attic and supplies him with painting supplies during his confinement. As Joe continues to try to extract a confession about the origin of the “Christ with the Adulteress” painting, van Meegeren starts to create a painting on a very old canvas that he strips.

Joe and his wife’s relationship continues to deteriorate, and she moves with their son to her father’s house in the country. The Ministry of Justice finally catches up with Joe and takes van Meegeren from him. Joe’s position at the Allied forces is dissolved, and he’s forced to get a manual labor job.

Joe has reached a low point, and yet he still thinks about the Vermeer investigation. As he’s drinking a bottle of alcohol, his assistant sees him sitting on a stoop. She invites him to her flat, and they kiss. He spends the night with her, but they both remain clothed and separated by a blanket.

The assistant has been researching van Meegeren’s notebooks and thinks there’s more to van Meegeren than anyone suspects. She believes van Meegeren actually painted a copy of “Christ with the Adulteress” and that’s why there’s no record of purchase for the painting in question. Surprised, Joe decides to hire a lawyer so he can go to see van Meegeren and confirm this suspicion. Van Meegeren applauds Joe’s discovery and tells Joe how to complete the aging process on the painting he was working on while under Joe’s watchful eye, a copy of a Vermeer titled “Jesus Among the Doctors.”

However, can Joe prove to the court that van Meegeren painted the first Vermeer painting? Also, will Joe consummate his affair with the assistant or reconcile with his wife?

THE LAST VERMEER is a cleverly constructed, engrossing, provocative period movie that explores moral issues related to the aftermath of World War II. As such, it has a strong moral worldview about truth, innocence and guilt, but displays a myriad of vices, including excessive drinking, smoking, some foul language, and hedonism. At one point, van Meegeren declares, “Marriage is an unnatural state,” in reference to his own failed marriage, but the movie’s ending validates the importance of marriage. In the end, although van Meegeren’s character is morally ambiguous, Joe makes an effort to live clean and upright. THE LAST VERMEER also contains brief foul language and nudity related to painting. So, MOVIEGUIDE® advises extreme caution.