"The Narrow Path to Redemption" 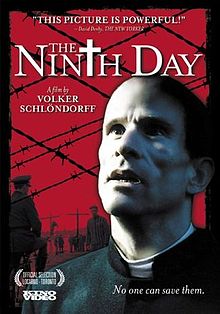 THE NINTH DAY, a German movie, focuses on an overlooked aspect of the National Socialist oppression during World War II -- the incarceration of thousands of priests and ministers in concentration camps like Dachau. Loosely based on a real-life priest's diary, it tells the story of Henri Kremer, a priest who is released from Dachau to return to Luxemburg, where the local German official pressures Henri to convince his bishop, who is resisting the Nazis, to capitulate and adopt the corrupted Nazi pagan heresy. For nine days, Henri struggles with this offer of freedom in return for becoming a Judas, as opposed to facing the horror of Dachau.

THE NINTH DAY is a masterful, significant work of art. Superbly filmed with authentic sets and costumes, it is also a great Christian story of redemption with strong Christian words and deeds. In spite of the fact that it's in another language, it captures and holds the viewer’s attention. The caution is the brutality of the concentration camp, with its killings, crucifixion and other violence. THE NINTH DAY is not a movie for little children, but it is a great movie that must be seen by everyone else.

(CCC, L, VV, D, M) Very ultra Christian worldview with Christian allegorical elements, in-depth discussions of theology, debates with twisted National Socialists; four obscenities in the subtitles but in the German language two of them are the word pig and one is not as obscene as it is in English, as well as Nazis mocking Christianity and proclaiming Christian phrases in a sarcastic matter, although these are clearly the bad guys; man beaten on head by Nazi concentration camp guard, people starving and shoved, man hung on cross with hands tied behind his back, Nazis slap a woman and destroy an apartment, and fear and intimidation, but not extraordinarily graphic violence; nothing sexual, and hugging and kissing of family members at reunion; no nudity; no apparent drinking; smoking; and, Catholic bishop stands up against National Socialists but his secretary wants to capitulate.

THE NINTH DAY focuses on an overlooked aspect of the National Socialist oppression during World War II — the incarceration of thousands of priests and ministers in concentration camps like Dachau. Although there have been several books by the survivors, this is a neglected area in movies. The good news is that there is now a movie that covers this forgotten history, THE NINTH DAY. and from the first instant, this movie is a very strong Christian story of redemption, as well as a masterful, significant work of art.

Loosely based on a true story, the movie opens with the Rev. Henri Kremer being herded into the concentration camp at Dachau. Later, the audience learns that he was part of the Christian Resistance to National Socialism. When one of the prisoners is being mistreated, he stops the Nazi soldier abuser and is pushed to the ground. When he tries to grab a bucket of water, it is kicked out from under him.

The next scene shows Henri in a famous cellblock at Dachau where they kept the priests and ministers (half of them died by the end of the war). The priests and ministers are trying to hold a communion service complete with serious prayers to Jesus Christ while some sing a German beer hall song to cover up what they are doing. When the soldiers bust into the cell block, the ministers try to disguise the evidence. The Nazi commander mocks one Polish priest and hits the priest with a metal bar on the head as if he was anointing him until he bleeds. Next, a cross is erected outside their cell block, and the priest is hauled up on the cross with his hands tied behind his back to be crucified.

Then, for no apparent reason, Henri is released to return home. His once-wealthy family is now living in a small apartment in Luxemburg. His beloved mother has just died.

The local German official tries to get Henri to convince the bishop, who is resisting the Nazis by locking himself in his house as a sign of protest, to relent and adopt the corrupted Nazi pagan heresy. The official understands theology, since he was preparing to be a priest before he joined the Nazi Party. Now, he argues that he realizes that the real hero of the Gospel is Judas, because without Judas’ betrayal there would be no crucifixion, no resurrection and no church. For nine days, Henri has to struggle with this official’s offer of freedom in return for becoming a Judas, as opposed to facing the horror of going back to Dachau.

THE NINTH DAY is a Christian allegory with strong Christian words and deeds. Henri’s trials and tribulations suggest the way of the cross and the trials every Christian faces to some degree.

The movie is superbly filmed with the inmates, the generals and the settings looking very authentic. In spite of the fact that it’s in another language, German, the movie captures and holds the viewer’s attention. It is a seamless whole, with none of the parts out of place.

The caution, of course, is the brutality of the concentration camp, with its killings, crucifixion and other violence. This is not a movie for little children, but it is a great movie and deserves to be watched by anybody who wants to know the true history of the real confessing Christian church during the Holocaust.