"A Mother Tries To Save Her Possessed Son" 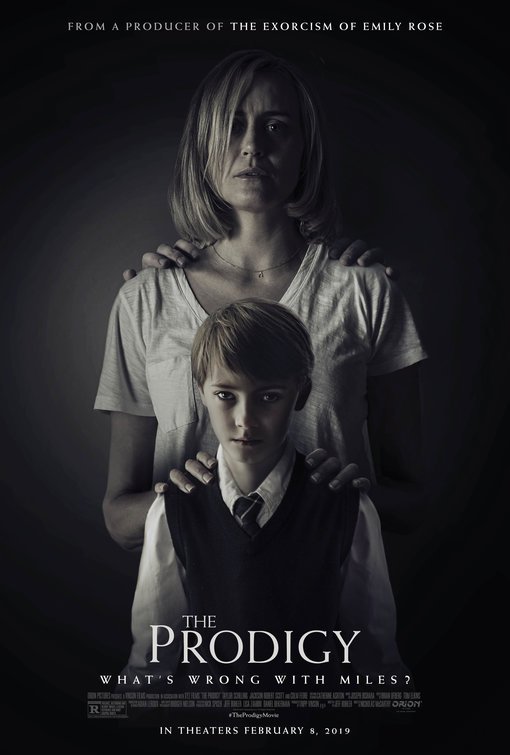 THE PRODIGY tells the story of two parents trying to understand why their son is demonstrating demonic behaviors. Their son, Miles, does terrible things such as killing the family dog, knocking a classmate out with a wrench and putting out glass for his babysitter to step on. The parents believe some evil force must be inside him. After consulting various doctors, they learn a former mass murderer has taken over Miles’ body through the process of reincarnation and wants to continue killing. Will the murderer inside Miles succeed or will Miles get his mind back?

THE PRODIGY is terrifying. The script flows well. The acting is good. But, the movie is extremely dark and demonic. It says that dead people, demons and evil spirits can take over our souls, and the only way to get rid of them is to obey them. There are no references to God, faith, the Bible, church, or prayer. THE PRODIGY also contains heavy gore, bloodshed, mass murder, excessive foul language, and an occult worldview with references to reincarnation. THE PRODIGY isn’t suitable for media-wise viewers.

(OOO, FRFRFR, HH, B, LLL, VVV, S, N, DD, MMM):
Dominant Worldview and Other Worldview Content/Elements:
Very strong occult, false worldview where reincarnation is the center of belief, no mention of God, the Bible, prayer, or Christians despite the movie’s spiritual elements, dark spirits are the dominant point of worship in the story, when boy’s body is taken over by a former mass murderer he must obey, worship, and agree to what the former murderer desires to get rid of him, movie states an innocent child’s soul can be taken over by another soul from a past life, plus minor strong humanist elements when doctor uses hypnosis to attempt to cure Miles’ dark behavior, murderer captures and cuts off women’s body parts for his own pleasure and satisfaction, there is no religion or center of worship in murderer’s life except evil, and murderer can do whatever he wants in life with no consequences, and mother tries to save her son (SPOILER) but fails
Foul Language:
34 obscenities (including a few “f” words and sexual obscenities)
Violence:
Extreme graphic violence, gory bloodshed displayed throughout entire movie, man stabs and kills his victims with a knife, excess shots of dead women on top of each other, shot of bloody, dead dog, little boy whacks his classmate with a wrench, little boy stabs his father while he’s driving, young boy stabs an innocent woman in the stomach until she bleeds to death, numerous shots of bloody victims, shots of a bloody woman with blood gashing from her stomach, shot of a woman picking glass out of a deep gash in her foot, shot of a dead dog with flies and bugs eating at its bloody body, shot of a dog’s missing head, shots of dead women’s hands
Sex:
One disturbing implied sexual situation that the murderer raped his female victims before they died
Nudity:
Naturalistic nudity of a naked baby boy after birth, shot of a naked man’s backside and bottom, one shot of a naked man’s entire front side – the audience does not see the man’s genitals because he is blocked by a police man, but everything is shown around his genitals
Alcohol Use:
Light alcohol use, mom and dad drink a beer on a date, therapist drinks a glass of wine, no drunkenness displayed
Smoking and/or Drug Use and Abuse:
Dad smokes a cigarette after an argument with his wife, light drug usage for medical purposes when little boy takes pills to help with motion sickness and therapist prescribes young boy medication to help calm down boy’s overactive mind; and,
Miscellaneous Immorality:
Miscellaneous immortality includes demons, dark angels, demonic beings, spirits, lying, mass murder, and [SPOILER] villain wins in the end.

THE PRODIGY is a horror movie about a mother and father’s struggle to figure out why their son demonstrates dark, demonic behavior. The movie has a solid script, and heightened suspense moves the story along nicely. However, the movie’s overall tone is horrific and disturbing. In the end, evil wins, making this a movie fit for only those misguided souls who like to see evil triumph.

The movie opens with a flashback to a creepy, older man (Edward) working in a dark shed. It cuts away to the shot of a young girl with a missing, bloody hand running away from his shed. A sensor goes off in the man’s shed, and he notices someone is outside. He pops out his window and sees the FBI surrounding his place with guns. He runs down to the dark hole in his basement and sees that the backdoor is open. His victim escaped! He screams loudly and grabs a gun. The man comes outside, butt naked with a gun, but the FBI shoots him and he dies.

Flash forward years later. The scene opens up to a young married couple giving birth to their son. The same day Edward died, Miles is born into the world. As Miles grows up, his parents learn he’s a gifted child and they are advised to place him into a school for children with heightened intelligence. Miles is an unusual boy, with one brown and one blue eye. However, he has trouble making friends and can’t connect with children his age. When he turns 8-years-old, he begins to say strange things in his dreams. One night, his mother records him and saves it.

Back at school, Miles is told he can’t work on a science project with a little girl he likes, and he goes berserk. He finds a wrench in the closet and hits the little boy that got to work with the girl he wanted to until the boy’s unconscious.

Sarah, Mile’s mother, takes him to a therapist where they try to determine what motivated Miles to hit the boy. Sarah gives the therapist the tape recorder of the strange jibberish he spoke in his dreams, hoping it may be a clue to why this happened. A few days later the therapist asks Sarah to come meet her friend, Dr. Jacobson, who specializes in researching reincarnation. He tells Sarah a dark, person from a past life has taken over Miles’ body, and Miles will not stop walking with darkness until the soul inside of him gets what they want out of this life. Sarah and her husband decide the reincarnation stuff is fake and don’t do anything about it. The next week, Mile’s kills their precious dog and stabs his father with a knife. Sarah takes him back to Dr. Jacobson to get his help.

Jacobson hypnotizes Miles and finds out Edward, a former mass murderer from Ohio, has taken over his body. Edward’s signature killer move was chopping off the right hand of all victims, which explains why Miles draws women’s hands all the time. Dr. Jacobson tells Sarah the soul won’t die until he gets what he wants on earth. Sarah learns Edward wants his last victim, the girl with the one hand that escaped from him, dead. Sarah must now choose. Will she find this woman and murder her for the sake of her son or will she have to send her son away to be locked up?

THE PRODIGY is simply put: terrifying. The script and story flow well. The acting, led by Taylor Schilling from TV’s ORANGE IS THE NEW BLACK, is good, but the movie is extremely dark and demonic. It says that dead people, demons and evil spirits can take over our souls, and the only way to get rid of them is to obey them. There are no references to God, the Bible, church, or prayer. THE PRODIGY also contains heavy gore, bloodshed, mass murder, excessive foul language, and an occult worldview with references to reincarnation. Finally, the ending is depressing. THE PRODIGY isn’t suitable for young people or media-wise viewers.