"The Funniest Marvel Entry Yet" 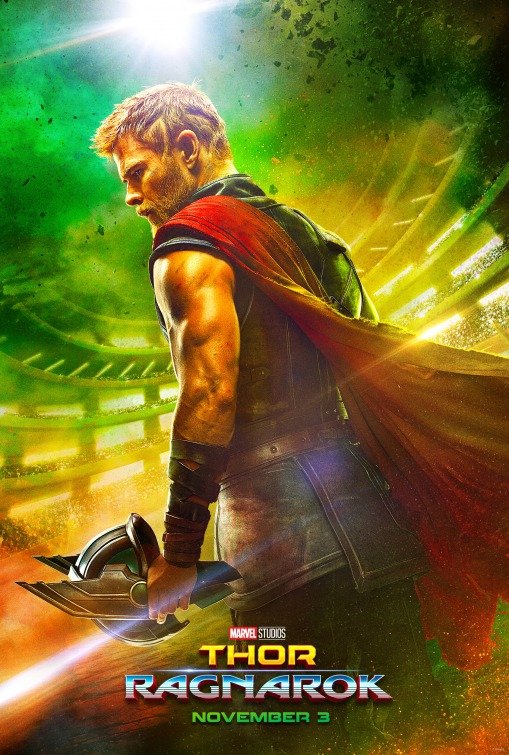 THOR: RAGNAROK, the third Thor movie in the Marvel Cinematic Universe, shows Thor trying to save his home Asgard, from impending total destruction, as foretold in prophecies. Thor learns he has an evil sister named Hela. Calling herself “the goddess of death, she unexpectedly defeats him in a fight. Thor is exiled to another planet, where he’s forced into fighting a gladiatorial game against his old friend, the Hulk. Can Thor and Hulk escape the planet and stop Hela from destroying the people of Asgard?

THOR: RAGNAROK is the best Marvel movie since CAPTAIN AMERICA: CIVIL WAR. It may even be the funniest of all the Marvel movies. As Thor, Chris Hemsworth shows off his comedic side. The movie as a whole is wonderfully exciting and surprisingly humorous, but it sometimes lacks the heartfelt, deeper moments of the previous movies. RAGNAROK has morally uplifting messages extolling family, sacrifice, friendship, and repentance, with some biblical allusions. However, it has more mythic, pagan elements. There’s also some foul language and lots of action violence. So, THOR: RAGNAROK warrants some caution for older children.

Dominant Worldview and Other Worldview Content/Elements:
Strong moral worldview of family, sacrifice, friendship, and transforming into a better person, with light biblical allusions, mitigated by light pagan elements surrounding Norse mythology, a man’s body dissolves and his spirit floats to the sky, main character prays to his dead father, and a sequence includes Doctor Strange, whose abilities involve the occult.
Foul Language:
12 obscenities (including a few “s” words), five light profanities and a reference to the “devil’s anus”.
Violence:
Moderate action violence, lots of fighting between gods and monsters, evil demonic creatures and dead beings, men are stabbed, killed, one is impaled, a man’s eye is slashed with a knife, a dragon’s head is decapitated, and its guts cover some women, and other intense action sequences, including a gladiatorial game.
Sex:
No sexual content, but while flying a spaceship, someone mentions that the owner used it for his orgies.
Nudity:
Upper male nudity, brief rear male nudity.
Alcohol Use:
A character is clearly an alcoholic and is frequently seen drinking.
Smoking and/or Drug Use and Abuse:
No drug use.
Miscellaneous Immorality:
One character frequently betrays his brother with no remorse.

THOR: RAGNAROK, the third Thor movie in the Marvel Cinematic Universe, is about Thor trying to save his home Asgard, from impending total destruction, as foretold in prophecies. Very different from the other THOR movies in tone, THOR: RAGNAROK is a fast paced, comical, entertaining action movie, but it doesn’t have quite the heartfelt, deeper moments of the previous movies.

The movie opens with Thor questioning a demon named Surtur about a prophecy where Asgard is destroyed. Thor battles the demon and steals the crown Surtur is wearing, which is the key to Ragnarok being unleashed on Asgard. Upon returning to Asgard, Thor finds out his brother, Loki, has been impersonating their father, King Odin, who Loki banished to earth. Thor is furious with Loki for his deception, and the two go to earth to find Odin. Once they arrive on Earth, however, they are approached by Doctor Strange who promises to help them find Odin, as long as they leave earth swiftly afterwards.

They find Odin in Norway, but he’s about to die. Before he dies, he reveals to Thor and Loki they have a sister, Hela, who calls herself “the goddess of death.” Odin says that, as soon as he dies, Hela will come for Asgard. Sure enough, Odin dies, and Hela appears. To Thor’s shock, Hela is so powerful, she destroys Thor’s hammer Mjolnir. Retreating through the Bifrost Bridge, Hela pushes Thor and Loki through the edges of the bridge and into space. She arrives in Asgard and easily defeats the soldiers, taking control. Her mission is to finish the job she originally had with her father Odin before he became a man of peace:  to defeat and take over as many worlds as possible.

Thor falls onto a planet of literal trash called Sakaar. He’s captured by a former Asgardian warrior, Valkyrie, and brought to the Grandmaster, an ancient man who controls Sakaar and puts on gladiatorial games. The Grandmaster purchases Thor as one of his contestants, and when Thor is put into the arena, he discovers that his old friend The Hulk is also on Sakaar (Hulk went missing after AVENGERS: AGE OF ULTRON), and the two must fight. However, Hulk has been a monster for two years straight, and there’s no saying if Bruce Banner, the man, is still in there. Can Thor get off Sakaar and return to Asgard to save his people from annihilation?

THOR: RAGNAROK is the best Marvel movie since CAPTAIN AMERICA: CIVIL WAR and may even be the funniest of all the Marvel movies. Embracing a 1980s nostalgic tone, RAGNAROK and its vibrant colors and classic rock soundtrack fits more in line with the GUARDIANS OF THE GALAXY series than it does the Shakespearean world of THOR. Chris Hemsworth as Thor really shows his comedic chops, and the chemistry between him, Loki and the Hulk (aka Bruce Banner) is explosively entertaining. Cate Blanchett is a terrific villain as Hela as well. The movie as a whole is wonderfully exciting and surprisingly humorous. That said, it sometimes lacks the heartfelt, deeper moments of the previous movies. Also, the inclusion of Doctor Strange for a few minutes is a bit confusing and an unnecessary reminder that the movies are connected.

The movie has positive, morally uplifting messages about family, sacrifice and friendship. It’s revealed that Odin was a warmongering, greedy King before he realized the error of his ways and transformed into a King promoting peace and goodness. Thor is willing to make difficult decisions to protect his people and shows no fear when facing his much more powerful, evil sister, Hela, the goddess of death. There are even some biblical Old Testament allusions. For example, the Asgardian people become a people without a home, which reminds us of what happened to Israel during the Babylonian captivity. While previous THOR movies attributed Asgard technology to scientific advancement, RAGNAROK has more mythic, pagan elements, including a scene where Thor “prays” to his deceased father and dialogue where Hela calls herself “the goddess of Death.” Finally, THOR: RAGNAROK also has some foul language, including a few regrettable “s” words, and lots of action violence. So, MOVIEGUIDE® advises caution for older children.