TO GILLIAN ON HER 37TH BIRTHDAY 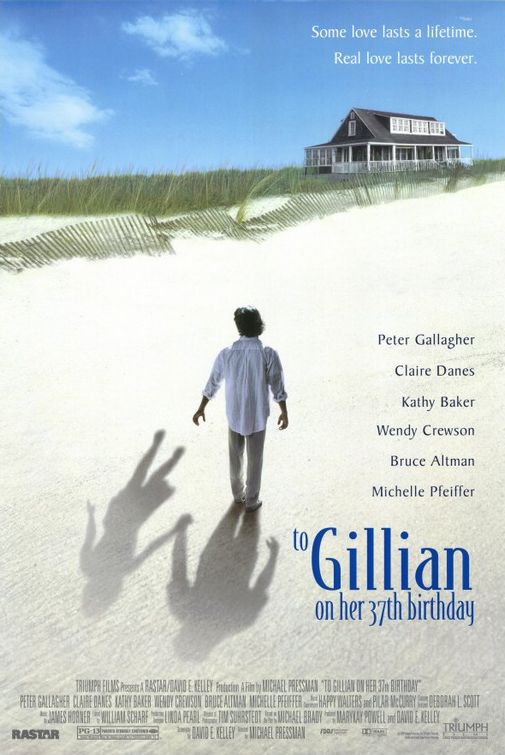 TO GILLIAN ON HER 37th BIRTHDAY is a film where a father and daughter deal with the death of their wife and mother. Daughter Rachel helps her father, David, realize that his imaginations of his late wife Gillian must come to an end. Although the movie has adult subject matter, some foul language and a romantic worldview, this movie demonstrates a realistic look at the grieving process.

TO GILLIAN ON HER 37TH BIRTHDAY tells about a father and a daughter who deal with the loss of their wife and mother, Gillian. Rachel is a 16-year-old returning home after a summer with her aunt and uncle. David lives on the beach in Nantucket. Gillian, played by Michelle Pfeiffer, has been dead for two years. Labor Day weekend marks not only Gillian’s birth and death, but also a family reunion. During the reunion, Gillian’s sister, Esther, and brother-in-law, Paul, bring their own feelings and expectations. Through all of the weekend traditions, David is met by her memories and pieces of the past that he wants to keep. David finally realizes what must be done when Rachel dreams of her mother and screams, “I have to let my mother be dead.”

Claire Danes gives a remarkable performance. Her portrayal of 16-year-old Rachel, dealing with death and her father, genuinely gives a balanced and realistic portrayal. A death is not something that happens and then is forgotten. It takes a grieving process that measures different for everyone. This movie, like BOGUS, shows an imaginary person who knows when it is time to let go. Hence, the movie demonstrates that giving up vain imaginations are necessary for what is ultimately real. It has adult subject matter, some foul language and a romantic worldview.

Rent or Buy TO GILLIAN ON HER 37TH BIRTHDAY: