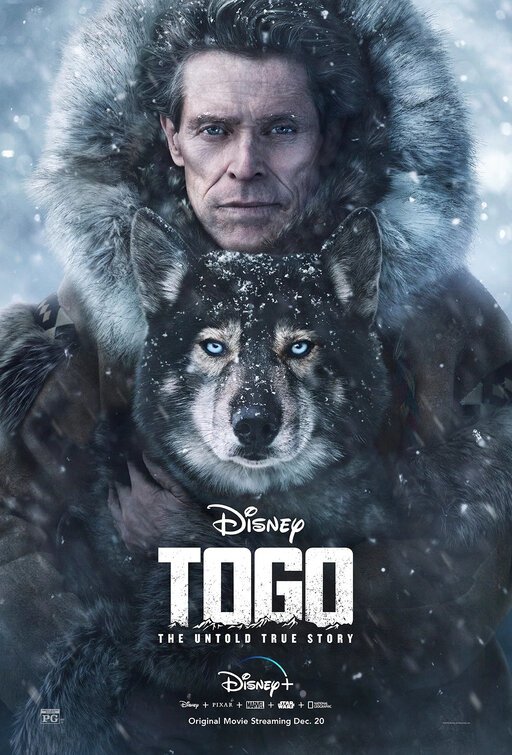 TOGO is a heartwarming adventure about Leonhard Seppala and his lead sled dog, Togo, two of the unsung heroes of the 1925 legendary dog sled serum relay from Nenana to Nome, Alaska. While Balto is commonly recognized as the canine hero of this historic run, Togo and his musher, Leonhard Seppala, are depicted as the predominant force behind the success of the heroic race against the elements to bring diphtheria antitoxin to the stricken city of Nome.

The overall cinematic quality of TOGO is excellent, with sweeping vistas of the Alaskan landscape and close-up shots of the husky dogs. The movie creates intense suspense during several nature-defying scenes. Togo’s tenacious dedication to Seppala harnesses him not only to the sled team but also to the viewer’s heart. TOGO extols many positive, biblical values. It applauds gratitude, courage, perseverance, kindness, and generosity and includes a depiction of the loving marriage relationship between Leonhard and his wife. TOGO is emotionally engaging and visually breathtaking. MOVIEGUIDE® advises caution for younger children due to some suspense and brief foul language.

(BBB, C, Pa, FR, L, V, N, A, M):
Dominant Worldview and Other Worldview Content/Elements:
Very strong moral worldview extols perseverance, gratitude, selflessness, kindness, courage, repentance, and generosity, with some light Christian references including two church steeples and a prayer, plus light pagan elements with several references to luck and to man/animals being able to “cheat death”; very strong biblical content with man refers to a dog as “the devil” and “Satan”
Foul Language:
One “d” obscenity, one “h” obscenity, two light profanities
Violence:
Light action violence with man and dogs shown fighting the elements and almost falling off a cliff, almost drowning, and almost getting lost in a blizzard
Sex:
No sexual immorality or sex scenes, but woman teases her husband she has “many lovers,” and married couple kisses several times
Nudity:
Brief upper male nudity
Alcohol Use:
People drink whiskey on several occasions
Smoking and/or Drug Use and Abuse:
No smoking or drugs; and,
Miscellaneous Immorality:
Mild miscellaneous immorality such as lying, deceit, gambling, and some anger.

TOGO is a heartwarming drama about two of the unsung heroes of the 1925 “Great Race of Mercy,” the legendary dog sled serum relay from Nenana to Nome, Alaska. While Balto is commonly recognized as the canine hero of this historic run, Togo and his musher, Leonhard Seppala, are depicted as the predominant force behind the success of the heroic race against the elements to bring diphtheria antitoxin to the stricken city of Nome.

Leonhard initially despises Togo as a puppy due to his small size and his refusal to stay away from Seppala’s training work with the larger dogs. However, Togo’s tenacity eventually pushes Leonhard to realize that, despite his size, Togo has incredible capabilities as a lead sled dog.

When the diphtheria epidemic threatens the lives of many children in Nome during blizzard conditions, Leonhard’s team of dogs, led by Togo, are considered to be the town’s only hope. While 20 total dog sled teams eventually join the relay, 19 of those teams average only 31 miles each while Leonhard’s team of dogs journeys 264 miles, crossing the dangerous Norton Sound and climbing McKinley Mountain despite wind chill temperatures of Minus 85 Degrees. Due to their determination and bravery, many of Nome’s children were saved.

TOGO’s cinematic presentation of the Alaskan landscape is truly breathtaking. Also, the emotional connection the movie encourages viewers to develop for Togo and Seppala creates intense suspense during several nature-defying scenes as the sled team crosses the Norton Sound and forges through frigid temperatures and blinding snow. The depiction of Togo’s early years is particularly entertaining and endearing as the energetic puppy defies every obstacle Leonhard tries to put in his path, including trying to give him away twice. Togo’s tenacity and determination to work with Seppala not only leads him to become a phenomenal and courageous lead dog, but also harnesses him to Leonhard’s – and the viewer’s – heart as well.

The predominant “deity” recognized by several of the characters in TOGO is luck. Before Seppala begins the arduous trek with Togo, one of the townsmen says that Nome “was founded on luck,” but that “luck dries up.” When Seppala and the dogs manage to cross the Sound right before the ice breaks apart, a friend at the roadhouse comments on his faith in Seppala’s ability because he cheated death. The movie does, however, portray a loving marriage relationship between Leonhard and his wife, Constance, and extols many positive, biblical qualities including gratitude, courage, perseverance, kindness, repentance, and generosity. Also, several churches are seen, and a prayer is recited.