"An Entertaining Evening with Bruce Springsteen" 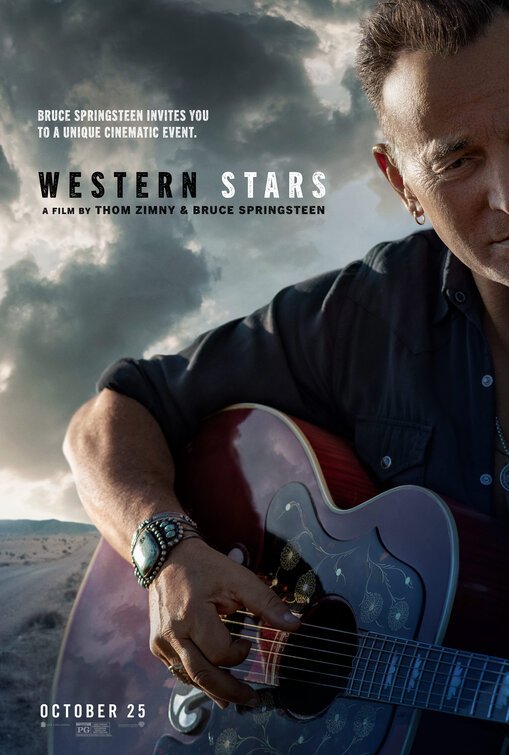 A documentary about Bruce Springsteen, WESTERN STARS interweaves stories, pictures, music, and information about Springsteen’s life. About a half hour of the movie is Bruce commenting on different aspects of life, including love, loss, failure, risk, brokenness. The rest is Bruce singing with an orchestra behind him in a barn setting and only two cameras covering various shots. There is an audience present, with only small eruptions of applause. Springsteen fans will love hearing his music in this type of intimate setting. They may also be entertained by the stories that Bruce tells.

WESTERN STARS has a Romantic worldview about chasing dreams and the best of life regardless of how much a person risks. God is mentioned twice, once within the context of love being evidence of God’s divinity. There’s no mention, though, of Jesus Christ’s sacrificial love. Bruce does talk, however, about becoming a better person by defeating destructive patterns in life and finding one’s “better angels.” Viewers looking for more details about Bruce’s life may be disappointed, but WESTERN STARS still makes for an entertaining evening with this acclaimed songwriter from New Jersey.

(RoRo, B, L, V, A, D, M) Strong Romantic worldview of chasing dreams and the best of life regardless of how much to risk, with some moral elements, including talk about becoming a better person by defeating destructive patterns in life and finding one’s “better angels,” and a few positive references to God coupled with the idea that love is evidence of God’s divinity, but no references to Jesus
Foul Language:
One BS word and one “d” word
Violence:
One comical reference by Bruce Springsteen to a woman who “trampled on my heart and sent it to me C.O.D in a paper bag”
Sex:
No sexual content (brief footage of a man and his wife dancing and kissing)
Nudity:
No nudity
Alcohol Use:
Depictions and references to alcohol use
Smoking and/or Drug Use and Abuse:
Cigarette and cigar smoking in old footage but no drugs; and,
Miscellaneous Immorality:
One reference to a woman who broke Bruce’s heart, some references to rebellion and poor role models.

Fans of Bruce Springsteen will love WESTERN STARS, with stories about Bruce interwoven with songs from his newest album. The fans will love the classic, raspy sound of Bruce’s voice. They may also be entertained by the stories Bruce tells. Some stories are about cars. Other, more serious stories are about love and heartbreak. He tells the audience, “This is my 19th album, and I’m still writing about cars,” which he says is a major metaphor for life. Then he asks, “But are we moving forward, or are we just moving?”

It is such nuggets as these that will make Springsteen lovers and newbie fans think about their own lives as they learn more about him in the process. He talks about change. He says he has learned to let go of the destructive parts of himself and be more compassionate towards himself and others and to treat people with the respect they deserve, living life with honor. He also talks about taking his bike up to Santa Monica on Saturday nights and watching people dance from afternoon until night. He also talks about brokenness, and how broken we all are, and also how our fears are closely linked to our ability to risk.

Having said this, fans who want to know more about Springsteen himself, might be a bit disappointed. The documentary tends to focus more on Springsteen’s music than learning about his personal or professional life. The setup in terms of cinematography is different than most documentaries. Most other documentaries focus on the person and interweave music. WESTERN STARS is the exact opposite. About a half hour of the movie is Bruce commenting on different aspects of life, including love, loss, failure, risk, brokenness, etc. The rest is of Bruce singing with an orchestra behind him in a barn type setting and only two cameras covering various shots. There is an audience present, with only small eruptions of applause in between songs. The music is beautifully done, with the addition of violins and other instruments to contribute to this acoustic set of songs.

God is mentioned twice, once within the context of love being evidence of God’s divinity. There’s no mention, however, of Jesus Christ’s sacrificial love. Bruce also talks about being transformed by “hard times and hard thoughts” which is also anti-biblical. Bruce also speaks about our ability to live in community while maintaining our autonomy. Christian viewers will not hear much more about Bruce’s spiritual life in this documentary, only with his experiences with love, loss and change. Faith, hope and trust are referenced generically when Bruce says such things “grows your garden of love.” As Christians, this part of the movie where he talks about how broken we are on this earth will remind us how lucky we are to have a Savior who cares enough to fix our broken pieces, and how hard it is to live life without the Savior.

Bruce also talks about love briefly, about a girl in Jersey who broke his heart, as well as marriage of more than thirty years to Patti Scialfa. It is the impetus for some of the songs he has written over the years, as well as feeling of being “lost,” which should be another reminder of the lostness of those who don’t know Christ. Patti is also featured throughout the movie singing and playing her instrument next to Bruce.

The movie is clean, and appropriate to play in the presence of both young and older children and teens. In fact, with no language, violence or sexual content (with one reference to a girl who broke his heart and his wife), and one scene of drinking, and one reference to drinking, it’s one of the cleanest documentaries and suitable for all ages. As always, parents should exercise caution before they view any movie.